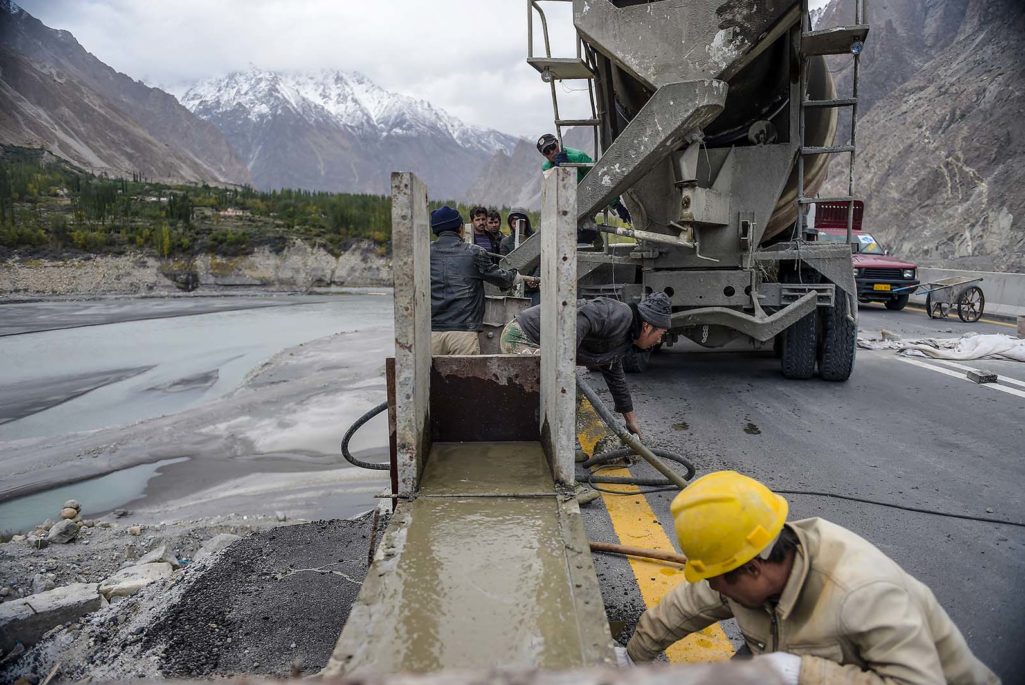 Chinese laborers work on the Karakoram highway in Gulmit village of Hunza valley in northern Pakistan. Hundreds of trucks are transporting Chinese workers by the thousands to build the new Silk Road in northern Pakistan. The Belt and Road Initiative is expected to lay the groundwork for Beijing-led infrastructure initiatives aimed at connecting China with Europe, Africa and Asia.

Dubbed by some as a modern-day Marshall Plan, China’s One Belt, One Road (OBOR) initiative will build roads, ports and railway tracks along ancient trading routes to Asia, Europe, the Middle East and Africa.

Launched in 2013 by President Xi Jinping, OBOR is a China-backed global connectivity initiative, aimed at creating a better infrastructure network across 65 countries that cover 60 percent of the global population and about one-third of global GDP.

While the OBOR will boost China’s global influence and benefit Chinese construction firms, we do not expect the initiative to have a major impact on mopping up excess capacity in China’s heavy industry.

One Belt, One Road, Multiple Ends

The OBOR also seeks to boost “soft” connectivity, such as trade and investment liberalization and social and cultural exchange. Originally a political slogan forming part of Xi’s “China Dream,” One Belt One Road was fleshed out in more detail in the action plan for the implementation of the initiative released in March 2015.

The plan maps out the land-based “Silk Road Economic Belt” (the Belt) and the oceangoing “21st Century Maritime Silk Road” (the Road). The Belt connects China with Central Asia and Europe, focusing on a “Eurasian land bridge”—a logistics chain from the east coast of China to Western Europe—and economic corridors connecting China with Mongolia and Russia, central Asia, west Asia and Southeast Asia. The Road links China’s east coast to Europe via the South China Sea and the Indian Ocean, aiming to build efficient transport routes between major sea ports and to connect China with Southeast Asia, Oceania, the Middle East, and North Africa through the Mediterranean.

The initiative is a means to multiple ends. Explicitly, it is intended to increase prosperity for the underdeveloped parts of China, particularly in the west of the country, through domestic investment and economic integration with Asian neighbors. It is also meant to foster greater connectivity and economic development along the routes, promising an infrastructure boost for Asia’s least connected regions. Moreover, Beijing expects the OBOR to secure China’s energy supply through diversification of import sources and transport routes.

It helps to diversify export markets and promote the international expansion of Chinese technology as part of its broader plan to upgrade its place in global production and value chains. Moreover, the OBOR also expands the political influence and the reach of Chinese power in Asia and elsewhere.

Furthermore, OBOR could boost the internationalization of the RMB by encouraging its use in both trade and financial transactions. RMB trade settlement increased to an average 30 percent of China’s total cross-border trade in 2015 from a mere 7 percent at the beginning of 2012. However, its share fell in 2016, largely because of the pressure on the RMB and measures to contain capital outflows.

China’s capital controls present a fundamental constraint for RMB internationalization. Without an open capital account and unfettered access to onshore financial markets, the incentive for nonresidents to hold the RMB is limited. But if China eventually liberalizes its capital account, we expect the room for RMB internationalization will be boosted by the OBOR initiative as regional trade and investment networks further expand and deepen.

Based on the scale of OBOR investment, the annual demand for heavy industry products in OBOR projects will simply not be large enough compared to the scale of overcapacity in China’s heavy industries. In our rough estimation, total annual OBOR spending of $140 billion per year would generate around 22 million tons of annual steel demand at current prices. That compares to estimates of excess capacity in China’s steel industry ranging from 250 million to 450 million tons per year.

Moreover, it is expensive to transport heavy industry products over long distances; sourcing closer to the project will often be more economically efficient, especially for cement.

Finally, political considerations make it unviable for OBOR projects to rely too much on imports and services from China. Recipient countries, especially those with relatively strong governance and sizable local domestic industries, such as India and Indonesia, are very unlikely to be willing to see Chinese companies doing all the work and/or accept large amounts of Chinese debt. While this may be different in countries with weaker governance that are more accommodative, such as Pakistan or Cambodia, that is a double-edged sword since the financial risk of projects will be higher.

A Greater Role in the Global Financial Architecture

OBOR helps to boost China’s regional and global influence by providing public goods and taking on significant financial risks that other investors would shy away from. The establishment of the Asian Infrastructure Investment Bank (AIIB) shows China’s attempt to reform the global financial governance system to accommodate its increased economic influence.

Setting up the AIIB may have sped up the long-stalled reform to the International Monetary Fund governance and given emerging market contributors greater voice—this was finally approved by the U.S. Congress in late 2015.

Meanwhile, the Asian Development Bank pledged to increase its lending capacity to remain relevant and effective in the region. Regardless of whether these moves were directly motivated by the AIIB, healthy competition will improve the efficiency of resource allocation and stimulate global financial governance reform.

*A follow-up piece by this author on the implications of OBOR on countries outside of China will be published on BRINK Asia later this month.

Bart Édes Distinguished Fellow at Asia Pacific Foundation of Canada
URL: https://www.brinknews.com/one-belt-one-road-chinas-grand-enterprise/
Get ahead in a rapidly changing world. Sign up for our daily newsletter. Subscribe
​​