Operating in the Dark: How Climate Change Will Affect Food 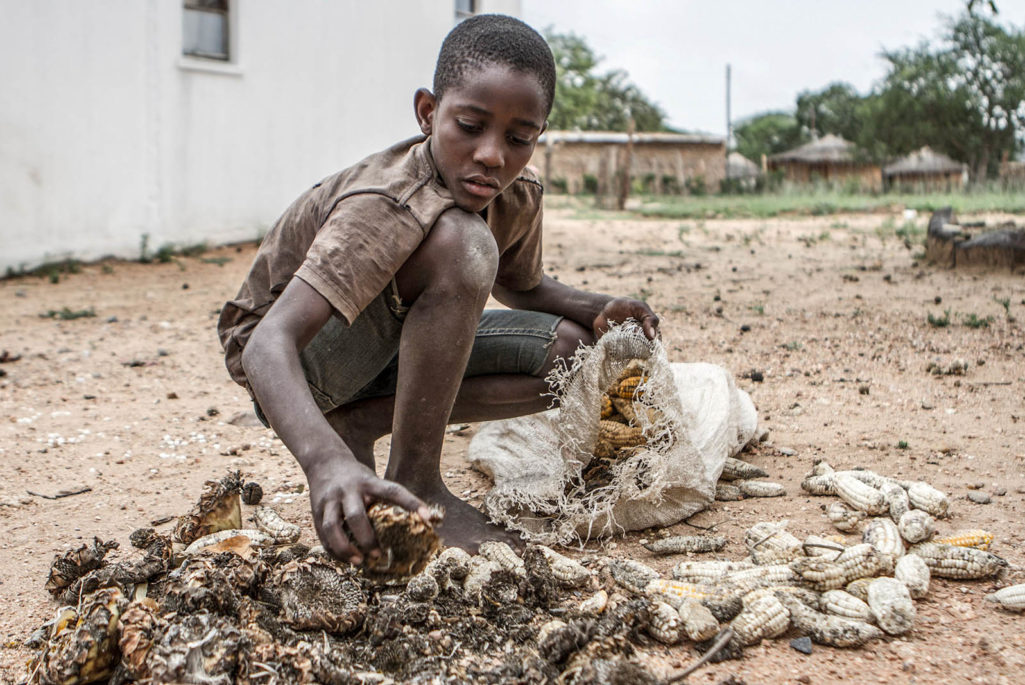 A 13-year-old Zimbabwe child packs last year's harvest from the irrigated gardens for storage on February 7, 2015 in the village of Nsezi in Matabeleland, southwestern Zimbabwe. Zimbabwe's President Robert Mugabe on February 5, 2016 declared a 'state of disaster' in many rural areas hit by a severe drought, with more than a quarter of the population facing food shortages.

[This is the bi-monthly column, The Future of Food, which explores current issues and future trends affecting global food systems.]

The year is 2020 and the world is on the cusp of a global food crisis. Throughout the next decade, the world will struggle to meet a host of escalating food security issues, price hikes and scarcity caused by population growth, rapid urbanization, extreme weather and political upheaval.

That’s the scenario that drove a recent real-time simulation, Food Chain Reaction: A Global Food Security Game. The exercise divided 65 thought leaders and policymakers from several countries into eight teams: Brazil, China, the EU, India, the U.S., continental Africa, multilateral institutions such as the UN and World Bank and, lastly, business and investors.

The exercise was designed to help decision-makers better understand the interdependencies of food, climate, trade and political stability, as well as the cascading effects of collective and individual policy decisions.

For someone like me, who has been working with companies for nearly three decades on developing approaches to manage resource scarcity and increase sustainable production, one of the most instructive outcomes of the exercise was how the private sector reacted to the stress that climate change had on the food system.

Faced with the risk of shortages, the private sector team became one of the most forceful advocates for increased transparency across global food supply chains. The group began calling for better global food security information, including “accurate measures of food stocks and flows, and improved forecasts of potential shortages.”

They did not just focus on improved transparency for things such as plantings, yields and areas of production. The private sector, as well as all other players, wanted more information on a much wider range of variables: food demand; water availability, usage, and rights; access to markets; infrastructure and information on key inputs for food production, processing and handling.

Real-time awareness of food security drivers and indicators will lead to the development of better-informed actions.

The consensus among all teams was that real-time “awareness of food security drivers and indicators will lead to the development of better-informed actions capable of pre-empting or mitigating crises.” In short, we can all learn more by sharing our respective data than we give up by trying to protect it.

That increased transparency, access to information and open-source data would be one of the first things the private sector players focused on was no surprise. It highlighted the crucial role of better information in improving sustainable production and trade, while also shining a light on our lack of good information on the wider global food system.

You Manage What You Measure

Business owners understand that transparency is directly linked to the principle that you manage what you measure, and that it also helps companies prioritize what to manage first. But in the real world, the dated approaches of 20th century thinking continue to hang on and drive decisions. Despite the obvious need, global transparency remains an aspiration rather than a reality.

There are reasons for this. The global commodity trading system that we rely on for efficiency and reliability was established in a way that eliminated the type of transparency that we need in a 21st century trading system, e.g. where a product was produced, who produced it, how it was produced, the impacts of production this year and in the past, and the implications of weather variability now and in future production. This is precisely the type of information that companies and governments need to identify risks and anticipate changes in the global food system.

Some technologies make it easier for companies to improve transparency and traceability of certain commodities from farm to shelf. There are also different platforms that manage aggregated data at scale and help buyers engage with suppliers. Some companies require suppliers to be more transparent in reporting impacts, including emissions, water use, etc.

But these individual efforts fall short of what is needed because they only focus in scope on one or two impacts: what a company is directly responsible for or what it is linked to directly.

The most significant impact of any company is how its raw materials are produced and how consumers use and then dispose of their products. What we really need is a global approach to impacts and traceability that addresses issues that transcend borders as well as any specific company’s value chains.

Yet, according to nonprofit CDP (formerly the Carbon Disclosure Project), when nearly 8,000 suppliers of 75 multinational members of CDP’s Supply Chain Program—with a spend of more than $2 trillion—were asked to disclose their climate and water data to help assess climate-related risks and opportunities along the supply chain, 49 percent did not supply the information.

It is not clear whether the companies simply did not have the information or felt that it was proprietary—or at least not the business of companies to whom they sell. In any case, this reaction suggests we have a long way to go before companies willingly share data that is key to managing supply chain risks.

Looking for the Lost Car Keys under the Street Light

So how do we reconcile the need for transparency with the obstacles inherent to our complex global food system? We cannot afford a system where each player attempts to maximize their position without understanding the implications, not only for others along the value chain, but for the future of the value chain itself. Ideally, we want to optimize the entire value chain rather than maximize performance in only one part of it. There are a number of ways that, taken together, can help us increase supply chain transparency.

First, the private sector needs to recognize that this is mainly its fight. It represents the actor with the technological know-how, the purchasing power and the foresight to increase supply chain transparency upstream.

Governments can impose transparency measures, but many will have neither the means nor the will to do so. Besides, WWF’s research suggests that from 5 to 50 percent of dozens of globally traded commodities are not produced legally in the country of origin. This suggests that, for whatever reason (and there are likely many), some governments are not up to the task.

The suppliers themselves can be pressured to change, but the CDP report demonstrates that voluntary reporting is spotty at best. The bottom 25 percent of food producers, those that are the poorest performers, cause about 50 percent of the environmental impacts. They have no incentive to change, much less report what they are doing.

Second, the food sector needs to address planetary risks, and the best way to do that is to collect and process and share data on a planetary scale. Big Data and analytics are a key part of identifying and then managing key global impacts of climate change on food production, and vice versa. This is true not just for one company, but for entire sectors.

Third, using increased transparency to mitigate climate-related risks will work best if it is a precompetitive approach. That way, information and insights on better practices, lessons learned, and inputs and outputs can be shared and analyzed collectively so that rational collective actions that lead to a more sustainable food sector can be pursued.

Each company has the obligation to try to protect its markets, margins and trade secrets, but 100 percent of nothing is nothing. The key to utilizing Big Data in food production is to build trust between companies; then we can all look forward to a better future if we optimize performance at a global level rather than try to maximize the performance of any single actor, especially if it jeopardizes the whole value chain.

The Food Chain Reaction exercise showed us that when push comes to shove, in a world buffeted by drought, production shortfalls and increasing hunger, a precompetitive approach to information sharing is critical to respond to climate change.

We can no longer afford to look for the lost car keys under the street light just because the light is better there. The same is true of value chains. Transparency allows us to shine a light on entire value chains and then decide the most critical places on which to focus. In this way, we will be able to anticipate, not just respond to, global food security issues.