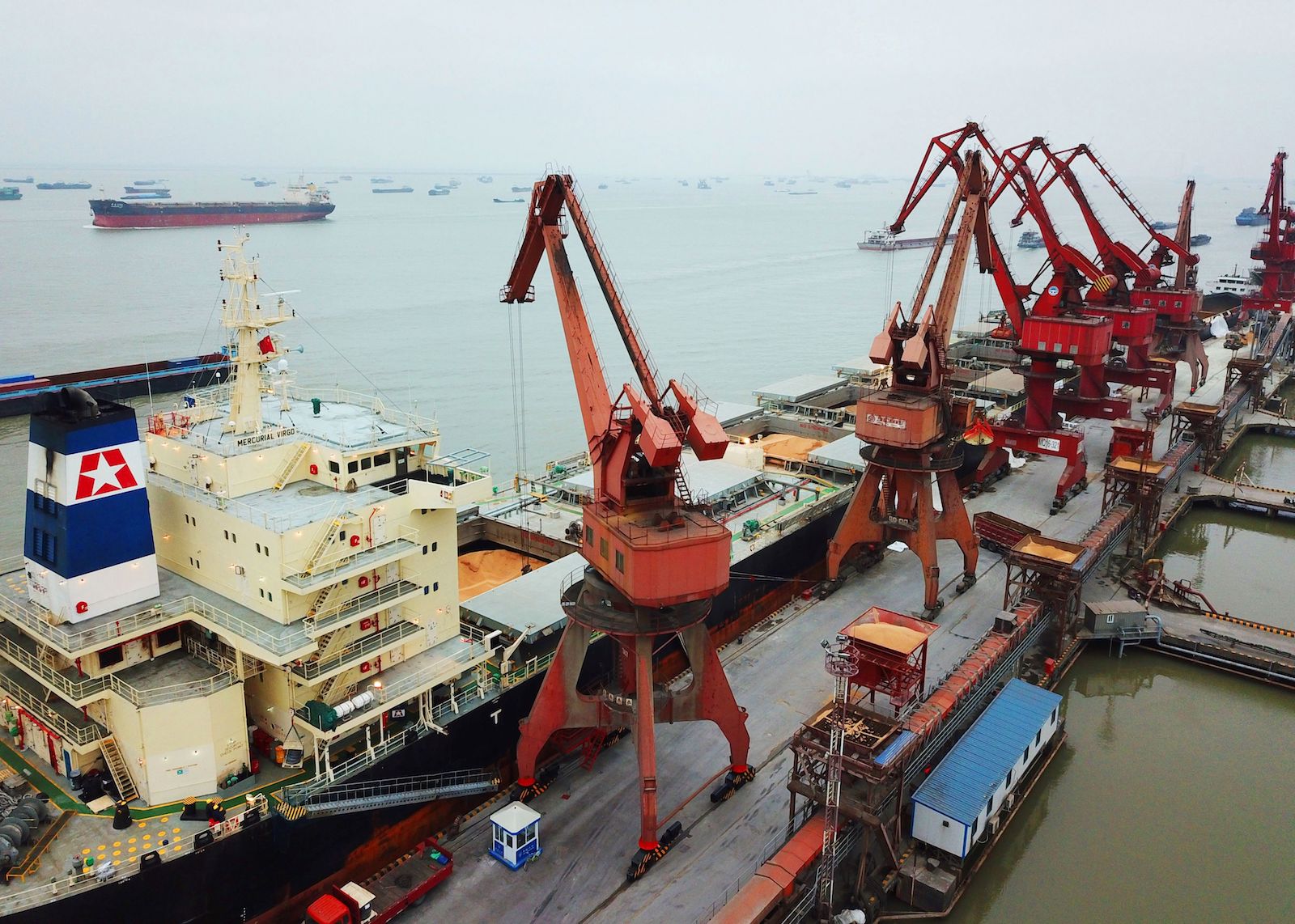 This aerial view shows workers loading cargo at a port in Nantong in China's eastern Jiangsu province. Even with rising protectionism, trade still has growth opportunity, and there remains room for expansion.

Emerging economies must strategize on how these changes can be dealt with, especially the economies that are already facing high unemployment levels. Potential reshoring of manufacturing activity to developed countries can also have an adverse impact on the ASEAN region, and in this regard, regional economies must consider strengthening intra-regional trade.

BRINK Asia spoke with Mahamoud Islam, senior Asia economist at Euler Hermes, about the various forces at work and how Asian economies are dealing with the ongoing changes.

BRINK Asia: What could be the long-term implications of the ongoing trade war between the U.S. and China?

That said, there is room for cautious optimism. First, protectionism is not new. Protectionist measures have increased over the past 10 years. And so far, the world has been able to cope with that: The volume of global trade growth has been resilient since the end of the global financial crisis. Second, it is also important to recognize that this rise of protectionism is mainly driven by the U.S. Outside of the U.S., there is a rise of new forms of multilateralism. The Belt and Road Initiative led by China, the TPP minus the U.S., the Japan-EU Economic Partnership Agreement and the Regional Comprehensive Economic Partnership (RCEP) are all mirror initiatives that aim to offset the negative impact of U.S. trade protectionism.

The bottom line here is that we should not take U.S. initiatives in terms of trade as the announcing of a new world trade war. Trade still has growth opportunity, and there is still room for expansion. We expect 4.1 percent growth for global trade this year, which is slightly above global economic growth—so we see global trade still supporting global economic growth. China is still expected to see strong economic growth of 6.6 percent this year, and we are seeing growth improvement in emerging markets such as Russia and Brazil; the eurozone will also see growth of above 2 percent.

BRINK Asia: Given that unemployment is already a challenge in many emerging Asian economies, how do you think countries can cope in the face of increasing automation?

Mr. Islam: First, technological advances and job creation are not mutually exclusive. History has proved it multiple times. Second, there is still room to grow in some labor-intensive industries. Countries such as India and Indonesia are still primarily dependent on highly labor-intensive sectors, and there is still opportunity for growth in these sectors. Favorable demographics, rising incomes and cheap labor costs are conducive for sectors such as agriculture, mining and hospitality. Moreover, large infrastructure needs provide opportunity for the construction sector. If you take developing Asia as a whole, for example, the Asian Development Bank has estimated that Asia’s infrastructure needs would amount to $1.7 trillion per year until 2030. Last, technological advances could be a source of new opportunities. Automation could indirectly create new jobs. For example, a company that is sparing financial resources thanks to automation could choose to invest more in services-related jobs—such as marketing and branding or after sales—that would help to catch on to the growing Asian middle class.

The real challenge will be to get the right skill set so people can adapt to changes. Proactive policies that encourage trainings and digital awareness will be crucial. Singapore’s SkillsFuture is a good example of such an initiative.

BRINK Asia: More broadly, do you see global value chains being significantly affected as a result of increased automation and potential reshoring to developed countries?

Mr. Islam: I think it is only one (small) part of the story, especially because automation is not a new phenomenon. In fact, there are a lot of other factors that come into play. One is demand growth. Global trade growth has undergone a regime change. Global trade in volume is now growing at around 4 percent. This contrasts with an average of 8 percent per annum growth between 2002 and 2007. Two is labor cost. Labor costs have increased rapidly over the past 20 years in emerging markets such as China, which has reduced their competitive advantage. The result is that companies are looking for other production hubs, and in some cases, they go back to the home markets (reshoring). Three—and this is more specific to Asia—relates to a country’s export specialization. Most Asian markets are specialized in electronics. The consequence is a lot of price competition among countries.

When a company operates overseas, it doesn’t have to be just through exports—it could also be through investments.

BRINK Asia: How can Asian economies prepare for the changes?

Mr. Islam: It depends on the market. In markets such as India and Indonesia, infrastructure has to be improved in order to unlock growth potential. In Singapore, Taiwan and Hong Kong, the objective will be to keep the local skill set competitiveness in check. To do so, investing in innovation and having a forward-looking industrial strategy will be key.

In China, improving financial foundations will be the main priority. Such improvement will come from a) better debt management (corporate debt is at 160 percent of GDP); b) measures to keep financial risks at bay (shadow banking, housing bubbles); and c) a continued and gradual financial opening.

The last priority will be to continue helping the economy climb the value-added ladder. Continued efforts to move up the value chain will help maintain China’s exports edge. Business-friendly reforms such as lower administrative burden and fair treatment of foreign corporates will help attract foreign direct investment.

BRINK Asia: And what about Asian businesses?

Second, try to diversify external revenues. When a company operates overseas, it doesn’t have to be just through exports—it could also be through investments. This is something that Japanese companies have done successfully in the past. Companies could invest in foreign markets in order to get closer to their end-clients. This allows you to invest in new manufacturing hubs from where you can export, but also where you can find new clients.

The export strategy should also be maintained, but taking full advantage of new digital services—e-commerce and expanding services offering will be pivotal.

Being selective is going to be important, as there are different opportunities in different parts of the world. If you take construction and infrastructure spending, there is a need for it across much of Asia. What we can learn from China with the Belt and Road Initiative is that you don’t need just exports; you also need an investment strategy. You invest abroad, and then you export there through your companies.

BRINK Asia: Finally, what role can blocs like ASEAN play?

Mr. Islam: I think ASEAN can play a critical role in the global economy. It can be a competitive manufacturing hub for the global economy and a solid driver of global demand. The regional block is full of complementarities. You have markets such as Singapore, Malaysia and Thailand, where the economies are more diversified, and where the business environment, access to financing and logistics are superior to the rest of the region. Second, there are markets such Indonesia, Philippines and Vietnam that are promising demand outlets thanks to favorable demographics, rising incomes and solid economic growth. And last, Cambodia, Laos and Myanmar are resource-rich and very price-competitive, but not globalized yet.

I think ASEAN can be a clear driver of the regionalization of trade in Asia-Pacific. The market has good economic relations and strong trade ties with all major economies (China, Japan, India, South Korea and Australia) in the region. It is a driving force for regional integration with the creation of the ASEAN Economic Community and the proposition of the RCEP.

It is well-positioned to benefit from the rise of the Chinese consumer. And markets such as Vietnam, Philippines and Indonesia have the potential to become alternative manufacturing hubs to China.

This unique mix of characteristics can stand the ASEAN region in good stead as it provides all the ingredients for stable and sustainable growth.