The Mess in Indian Finance Beyond Banking 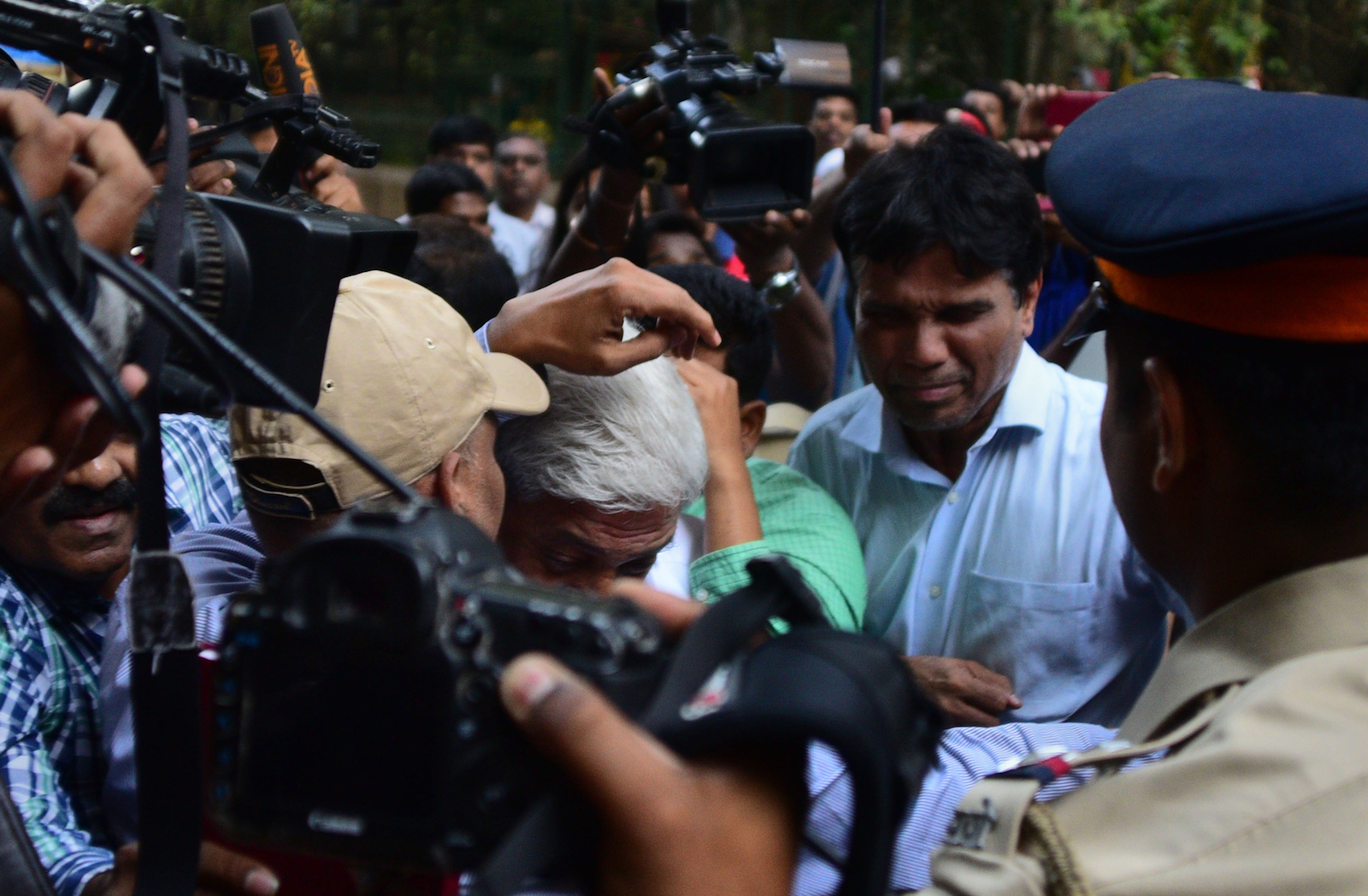 Indian Central Bureau of Investigation officials escort the former deputy manager of the Punjab National Bank. India has been struggling to deal with its banking crisis on account of a high level of nonperforming assets, loan frauds and relatively muted credit demand from businesses.

This is the first of two pieces on the issues plaguing the nonbanking financial company sector in India. While this piece delves into the origins of the problems and potential solutions, the second piece will look at the reasons for the rise of NBFCs and the implications for the Indian financial system at large.

India has been struggling to deal with its banking crisis on account of a high level of nonperforming assets, loan frauds and relatively muted credit demand from businesses for some time now. But to make matters worse, it has another headache: the mess beyond banking in the nonbanking financial company (NBFC) sector—exemplified by the credit crisis of IL&FS, India’s leading infrastructure finance company.

NBFCs, which account for 16 percent of total institutional credit in India, are facing a serious liquidity squeeze. If it is not resolved in time, it will create further complications for India’s macroeconomic management by scaring away investors in the country’s debt market, which is growing but still under-developed and illiquid.

As NBFCs have borrowed heavily from the banking sector, especially the state-owned banks, any crisis in the NBFC sector could spill over to them and add to their bad loan pileup, which is already high at 10.4 trillion rupees according to India’s central bank. In addition to providing long-term infrastructure financing, NBFCs are a major credit source for buying homes, commercial vehicles and agricultural equipment. Obviously, any credit squeeze on the part of NBFCs could dampen the prospects of these industries and, in turn, the prospects of dependent industries, such as steel and cement, for instance. That would have an adverse effect on the country’s overall economic growth.

The Genesis of the Problem

As per regulations of the Reserve Bank of India, NBFCs cannot accept low-cost deposits from the general public, and hence, they have to either rely on equity or debt to fund their operations and grow.

On the other hand, prompted by the declining attractiveness of gold or riskier and illiquid real estate, and probably demonetization, the Indian economy is witnessing increased financialization with both households and companies moving their savings into financial assets—mutual funds, in particular. This has led to a groundswell in domestic capital flows to India’s equity and debt markets through the mutual fund route. Second, most commercial banks faced with surging bad loans have been avoiding riskier loans to SMEs, poor households and the self-employed, but are willing to indirectly lend to NBFCs, which then re-lend that money to these neglected borrower segments.

Due to the above reasons, it is now relatively easier for NBFCs to raise capital. The better-rated NBFCs could easily issue debt papers to mutual funds and insurance companies looking for higher returns than what the somewhat safer bank deposits and government bonds could offer. Thus, instead of raising equity, India’s NBFCs have been relying on short-term market borrowing instruments such as commercial papers and certificates of deposits, and loans from commercial banks, often to fund long gestation infrastructure projects. This is bound to create asset-liability mismatches given the long-term and generally low-margin nature of infrastructure projects.

With access to relatively cheaper capital from mutual funds, insurance companies and commercial banks, NBFCs have grown rapidly, taking on credit risks that commercial banks try to avoid. To grow faster and keep the stock markets happy, better-rated NBFCs have started lending to other NBFCs with lower ratings that can’t raise money from mutual funds, insurance companies or banks on their own, thereby adding to the credit risk. This is how commercial banks and NBFCs are linked, and hence, any trouble in the weaker NBFCs may cause trouble in the whole banking and financial sector. And, that may explain why the Indian government acted so swiftly to take over the troubled IL&FS as it couldn’t afford to let it impact the whole system.

Unlike the equity market, India’s corporate bond market is shallow and illiquid, and that must change.

It’s worth repeating that the access to easy money is bound to result in excesses—that is, subprime lending accentuated by increasing unreliability of rating agencies, which are widely trusted by all kinds of lenders to assess credit risks. Besides, independent directors are proving to be ineffective when it comes to checking excesses by management—and so are the auditors who fear losing business if they report any misdeeds of their paying clients. It is, therefore, not surprising that there is outcry in the country to rein in rating agencies, pliant independent directors and unscrupulous auditors.

Many would agree that reining in credit rating agencies should be the top priority for regulators if India wants to avoid IL&FS-type credit crises, which may jeopardize the stability of India’s banking and financial sector if they are not checked. Some suggest that rating agencies should be required to buy insurance to compensate their clients for any loss arising out of their unreliable ratings. While this is theoretically a good idea, the rating agencies would simply add the cost of insurance premium to their rating charges and continue to work in the same way they have been doing so far.

Credit ratings cannot be a substitute for due diligence, as they are just an opinion about credit risk of an issuer. Relying simply on ratings is a lazy way of lending or investing in debt papers. Investors must do their own due diligence before investing in buying debt papers from a company, NBFC or otherwise. However, that would call for strict disclosure norms (to be enforced by regulators) and stringent penalties for misleading or wrong disclosures, along with a more forward-looking International Financial Reporting Standards (IFRS) accounting and valuation system.

Moreover, it is time to make independent directors really effective and accountable so that an IL&FS-like situation is avoided. Often, independent directors are picked from a list of friends or acquaintances and are not chosen on the basis of technical competencies and/or some understanding of disclosure norms or related party transactions. The presence of such independent directors on board is merely ceremonial, even though they are meant to be central to enforcing corporate governance. Such directors are often pliant and ignore the excesses of promoters or top management.

The British Corporate Governance Code 2018 can give many useful suggestions to New Delhi on how to tighten its lax corporate governance regime. How about imposing a cap on the debt-equity ratio? Raising equity is relatively difficult for many companies—and more so for the less well-known ones; hence, such companies rely more on borrowing from commercial banks (by trying to manipulate ratings or using crony connections) that often become difficult to repay or service. Therefore, some kind of balance between debt and equity funding must be stressed by investors and regulators or both. That would also be good for reining in excessive bank borrowing that often leads to bad loans—for instance, by steel companies as highlighted by the current steel minister. Therefore, a combination of strict disclosure norms, the IFRS accounting system and some capping on debt-equity ratio can bring discipline across sectors, including NBFCs. This will minimize the risk of default and its contagion effect on the banking and financial sector.

Unlike the equity market, India’s corporate bond market is shallow and illiquid, and that must change. The deepening of the bond market will lessen the pressure on commercial banks to provide long-term finance and minimize their risk of asset-liability mismatches in addition to providing a robust debt market for much needed infrastructure financing.

Graham Pearce Partner, Global Defined Benefit Segment Leader at Mercer
URL: https://www.brinknews.com/the-mess-in-indian-finance-beyond-banking/
Get ahead in a rapidly changing world. Sign up for our daily newsletter. Subscribe
​​