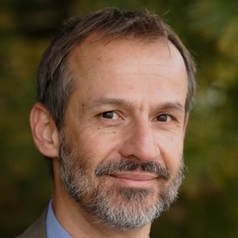 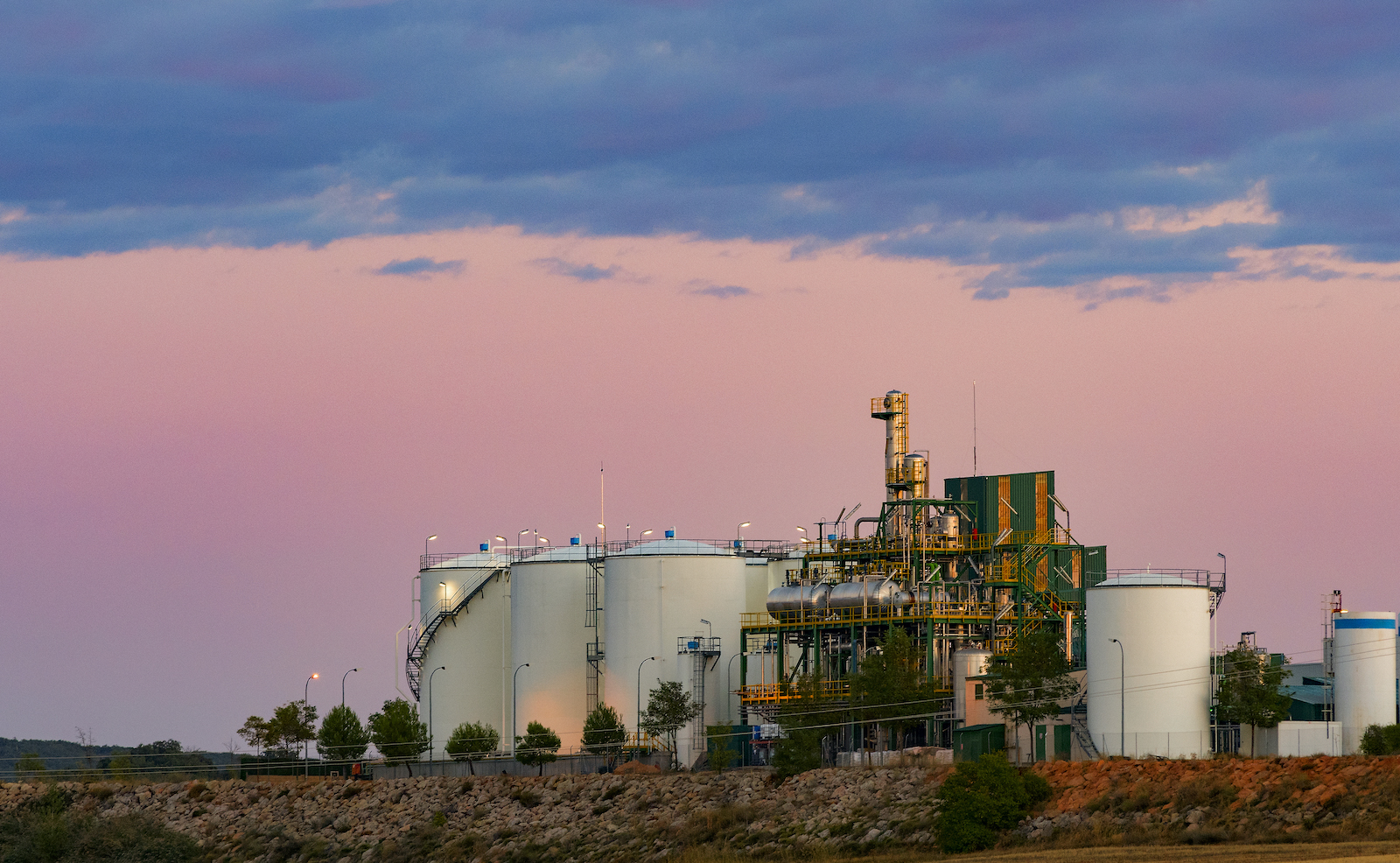 Today the vast majority of biofuels are made from crops like corn and soybeans.

If you’ve pumped gas at a U.S. service station over the past decade, you’ve put biofuel in your tank. Thanks to the federal Renewable Fuel Standard, or RFS, almost all gasoline sold nationwide is required to contain 10% ethanol — a fuel made from plant sources, mainly corn.

With the recent rise in pump prices, biofuel lobbies are pressing to boost that target to 15% or more. At the same time, some policymakers are calling for reforms. For example, a bipartisan group of U.S. senators has introduced a bill that would eliminate the corn ethanol portion of the mandate.

Enacted in the wake of the attacks of Sept. 11, 2001, the RFS promised to enhance energy security, cut carbon dioxide emissions and boost income for rural America. The program has certainly raised profits for portions of the agricultural industry, but in my view it has failed to fulfill its other promises. Indeed, studies by some scientists, including me, find that biofuel use has increased rather than decreased CO2 emissions to date.

Current law sets a target of producing and using 36 billion gallons of biofuels by 2022 as part of the roughly 200 billion gallons of motor fuel that U.S. motor vehicles burn each year. As of 2019, drivers were using only 20 billion gallons of renewable fuels yearly — mainly corn ethanol and soybean biodiesel. Usage declined in 2020 because of the pandemic, as did most energy use. Although the 2021 tally is not yet complete, the program remains far from its 36 billion-gallon goal. I believe the time is ripe to repeal the RFS, or at least greatly scale it back. 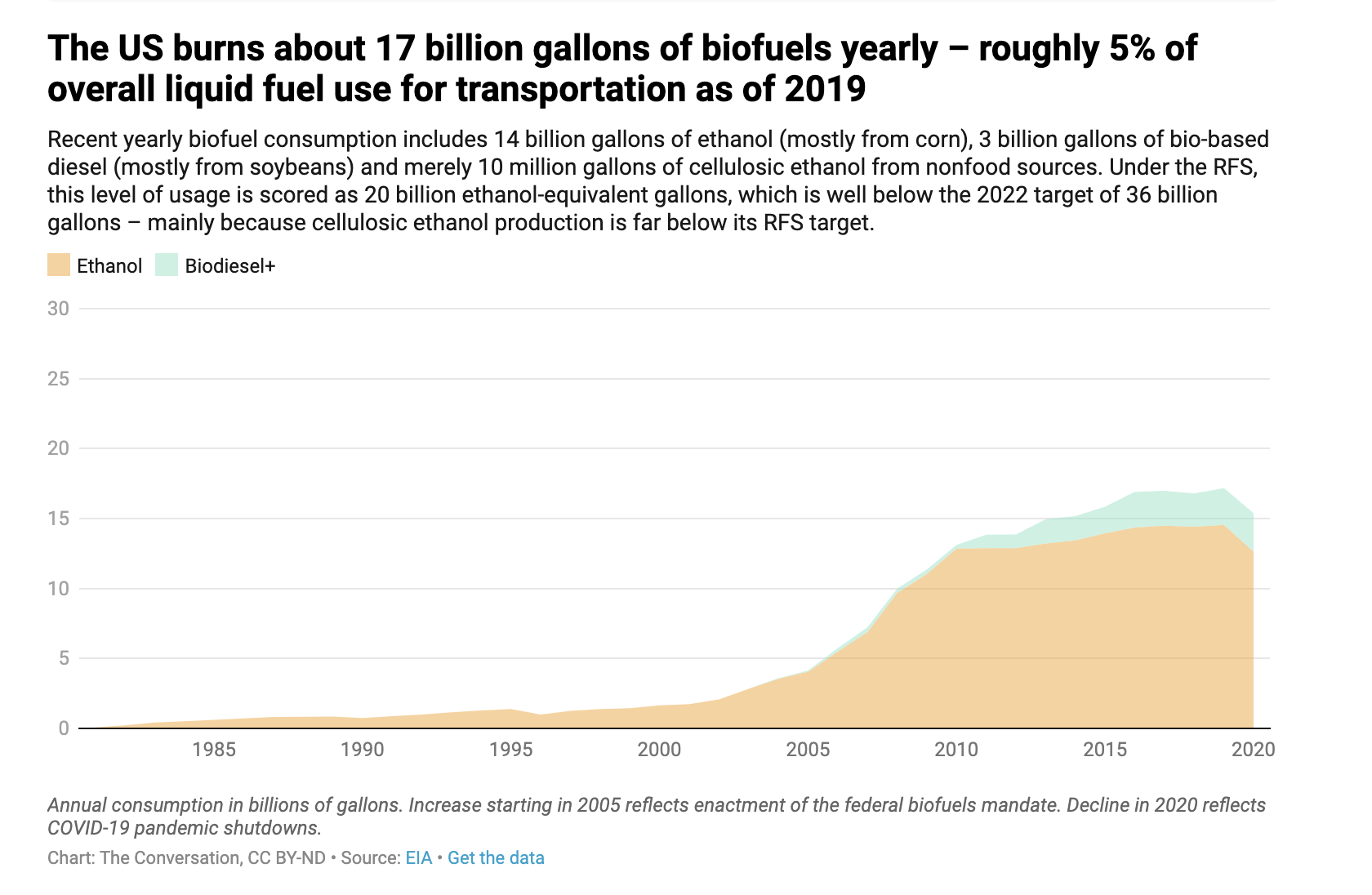 Higher Profits For Many Farmers

The RFS’s clearest success has been boosting income for corn and soybean farmers and related agricultural firms. It also has built up a sizable domestic biofuel industry.

The Renewable Fuels Association, a trade group for the biofuels industry, estimates that the RFS has generated over 300,000 jobs in recent years. Two-thirds of these jobs are in the top ethanol-producing states: Iowa, Nebraska, Illinois, Minnesota, Indiana and South Dakota. Given Iowa’s key role in presidential primaries, most politicians with national ambitions find it prudent to embrace biofuels.

The RFS displaces a modest amount of petroleum, shifting some income away from the oil industry and into agribusiness. Nevertheless, biofuels’ contribution to U.S. energy security pales compared with gains from expanded domestic oil production through hydraulic fracturing — which of course brings its own severe environmental damages. And using ethanol in fuel poses other risks, including damage to small engines and higher emissions from fuel fumes.

For consumers, biofuel use has had a varying, but overall small, effect on pump prices. Renewable fuel policy has little leverage in the world oil market, where the biofuel mandate’s penny-level effects are no match for oil’s dollar-scale volatility.

Some researchers have found that adverse effects of biofuel production on land use, crop prices and climate are much smaller than previously estimated. Nevertheless, the uncertainties surrounding land use change and net effects on CO2 emissions are enormous.

Biofuels Are Not Carbon-Neutral

The idea that biofuels are good for the environment rests on the assumption that they are inherently carbon neutral — meaning that the CO2 emitted when biofuels are burned is fully offset by the CO2 that feedstocks like corn and soybeans absorb as they grow. This assumption is coded into computer models used to evaluate fuels.

Leading up to passage of the RFS, such modeling found modest CO2 reductions for corn ethanol and soybean biodiesel. It promised greater benefits from cellulosic ethanol — a more advanced type of biofuel that would be made from nonfood sources, such as crop residues and energy crops like willow and switchgrass.

But subsequent research has shown that biofuels are not actually carbon-neutral. Correcting this mistake by evaluating real-world changes in cropland carbon uptake reveals that biofuel use has increased CO2 emissions.

One big factor is that making biofuels amplifies land-use change. As harvests are diverted from feeding humans and livestock to produce fuel, additional farmland is needed to compensate. That means forests are cut down and prairies are plowed up  to carve out new acres for crop production, triggering very large CO2 releases.

Expanding farmland for biofuel production is also bad for the environment in other ways. Studies show that it has reduced the abundance and diversity of plants and animals worldwide. In the U.S., it has amplified other adverse impacts of industrial agriculture, such as nutrient runoff and water pollution.

The Failure of Cellulosic Ethanol

When Congress expanded the biofuel mandate in 2007, a key factor that induced legislators from states outside the Midwest to support it was the belief that a coming generation of cellulosic ethanol would produce even greater environmental, energy and economic benefits. Biofuel proponents claimed that cellulosic fuels were close to becoming commercially viable.

Almost 15 years later, in spite of the mandate and billions of dollars in federal support, cellulosic ethanol has flopped. Total production of liquid cellulosic biofuels has recently hovered around 10 million gallons per year — a tiny fraction of the 16 billion gallons that the RFS calls for producing in 2022. Technical challenges have proved to be more daunting than proponents claimed.

Environmentally speaking, I see the cellulosic failure as a relief. If the technology were to succeed, I believe it would likely unleash an even more aggressive global expansion of industrial agriculture — large-scale farms that raise only one or two crops and rely on highly mechanized methods with intensive chemical fertilizer and pesticide use. Some such risk remains as petroleum refiners invest in bio-based diesel production and producers modify corn ethanol facilities to produce biojet fuel.

Today the vast majority of biofuels are made from crops like corn and soybeans that also are used for food and animal feed. Global markets for major commodity crops are closely coupled, so increased demand for biofuel production drives up their prices globally.

Some researchers have found that adverse effects of biofuel production on land use, crop prices and climate are much smaller than previously estimated. Nevertheless, the uncertainties surrounding land use change and net effects on CO2 emissions are enormous. The complex modeling of biofuel-related commodity markets and land utilization is impossible to verify, as it extrapolates effects across the globe and into the future.

Rather than biofuels, a much better way to address transportation-related CO2 emissions is through improving efficiency, particularly raising gasoline vehicle fuel economy while electric cars continue to advance.

A Stool With Two Weak Legs

What can we conclude from 16 years of the RFS? As I see it, two of its three policy legs are now quite wobbly: Its energy security rationale is largely moot, and its climate rationale has proved false.

Nevertheless, key agricultural interests strongly support the program and may be able to prop it up indefinitely. Indeed, as some commentators have observed, the biofuel mandate has become another agribusiness entitlement. Taxpayers probably would have to pay dearly in a deal to repeal the RFS. For the sake of the planet, it would be a cost worth paying.

John M. DeCicco, Ph.D., is a research professor emeritus retired from the University of Michigan. His work addresses energy and environmental challenges through an interdisciplinary approach anchored in physical science while drawing insights from economics, other social sciences and public policy. He has testified many times before Congress and has more than 200 published papers, articles, reports and formal public policy submissions to his credit.

Hamza Mudassir Lecturer in Strategy at University of Cambridge
URL: https://www.brinknews.com/the-us-biofuel-mandate-operates-on-outdated-assumptions/
Get ahead in a rapidly changing world. Sign up for our daily newsletter. Subscribe
​​