Why India Is Heading Toward an Economic Slowdown 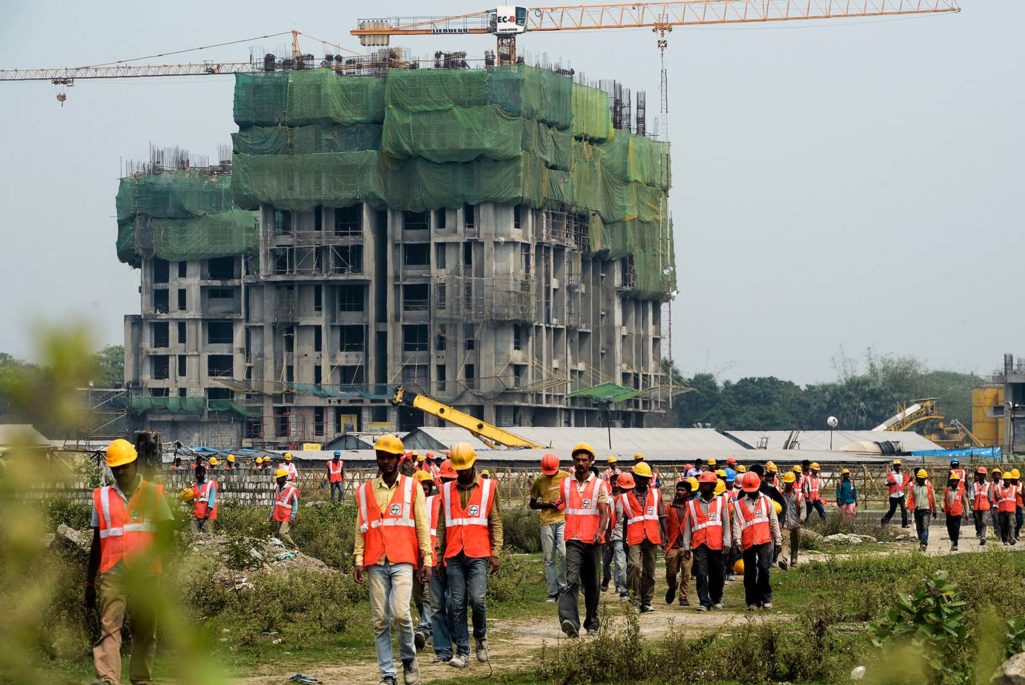 Indian construction laborers walk to their shelter during a shift change at a housing project construction site. India's economic fortunes have been hampered by the global economic slowdown and a failure to push much-needed reforms through parliament.

The International Monetary Fund pruned India’s growth forecast from 7.6 percent to 6.6 percent in October 2016.* Three months later, India’s official forecasting agency, the Central Statistics Office, estimated the Indian economy will grow by 7.1 percent in FY 2016-17 instead of 7.6 percent—and this is without factoring in the effects of demonetization, which is expected to adversely impact economic growth.

The downward revision of growth forecasts is an indication of a looming economic slowdown. Here are a few signs that India is gradually heading toward one.

Investment slump. It is estimated that investment, as measured by gross fixed capital formation, will fall in 2016-17 by 0.2 percent, after having increased by 3.9 percent and 4.9 percent in the two preceding years. The Indian economy cannot continue to grow at 7-8 percent unless investment, especially from the private sector, picks up.

Demonetization has hurt domestic sales of most businesses, and exports have remained sluggish for almost two years. Private sector firms are sitting on unsold inventories and operating well below installed capacities, and as a result, their capex plans are on hold and show no signs of a pickup anytime soon given the stressed balance sheets of large Indian companies in key industrial sectors such as construction and infrastructure.

In India, the fiscal multiplier of capital expenditure is 2.5 compared to less than 1 for revenue expenditure, including expenditure on salaries and allowances of government officials, fuel subsidies and interest payments. This means that each rupee spent on the creation of capital assets leads to a 2.5 rupee increase in India’s national income, while each rupee spent on revenue adds less than 1 rupee to the national income.

While Finance Minister Arun Jaitely’s latest budget increased capital expenditure by 11 percent, that stood for no more than a 0.5 percent increase in the share of capital expenditure in total budgeted expenditure, which is not sufficient to boost growth. It is also not enough to make up for the decline in private sector investment. Moreover, much of this increase may be because of the reclassification of different heads (how the expenditure is calculated) rather than a genuine increase in capital allocation.

An analysis of 597 Indian companies shows that combined sales barely increased in the fourth quarter of 2016.

The third important leg of investment is foreign direct investment (FDI). India received $43 billion in FDI between April and November 2016, but it also witnessed an outflow of $16.4 billion, implying a net inflow only $26.6 billion, which is not that impressive. Even more importantly, about 60 percent of the FDI inflow to India is in the form of private equity investment that doesn’t necessarily create new assets or new jobs.

Job crunch. One million youths are joining India’s workforce every month and the current rate of job creation is insufficient to absorb them. The eight key sectors of the economy—manufacturing, construction, trade, transport, hospitality, information technology, education, and health—added 135,000 jobs in all of 2015; 421,000 in 2014; and 419,000 in 2013.

On the other hand, Indian companies are facing difficulties in hiring suitably skilled personnel, and many positions remain unfilled. Jobless growth will eventually dent consumption demand, which is currently driving the Indian economy at a time when investment and export demand are not supportive and fiscal considerations are likely to keep government expenditure capped.

Poor corporate show. An analysis of 597 companies—excluding those in banking and finance, and the oil and gas sectors—shows that their combined sales increased by just 4.3 percent on a year-on-year basis in the fourth quarter of 2016, the slowest in the last five quarters. Moreover, aggregate sales data may not give an accurate picture of the problem because of the better performance by India’s IT services companies, which contributed over one-third of the total sales.

Demonetization could have worsened the current situation, but the performance of India’s formal sector has been on a downward spiral for quite some time, with differences across sectors. Fertilizer and real estate companies have performed badly compared to automobile and fast-moving consumer goods companies, for example.

Subdued exports. India’s merchandise exports value had been hovering around $300 billion for four years or so until 2014-15. In 2015-16, exports fell to $262 billion, and the decline has continued in 2016-17. While merchandise exports started to rise after September 2016, leading many to think that Indian exports turned a corner, the increase may be due to the low base effect as India’s exports have declined for almost two years prior. Moreover, given the calls for rising protectionism and the continued global slowdown, it is too early to predict a revival, and for the moment, India’s export prospects remain bleak.

A slowing Chinese economy will also continue to put pressure on India’s exports going forward, both in its domestic market as well as third country markets, where Indian firms compete with their Chinese counterparts in sectors such as steel, chemicals and textiles. Furthermore, the Trump administration could look to penalize imports and outsourcing by American firms, and that will hurt both India’s goods and services exports in the future.

India cannot rely solely on external markets for supporting its economic growth and will have to put its own house in order. The implementation of the goods and services tax will integrate India’s fragmented state markets into a nationwide market of a population of 1.3 billion and a GDP of $2.1 trillion and improve India’s relative attractiveness as an investment destination for domestic and foreign sources. To tap the entrepreneurial talent of the young and first-time entrepreneurs, India needs to overhaul its business facilitation regime and make it easier to conduct business. Meanwhile, the strict implementation of India’s Insolvency and Bankruptcy Code will help address the problem of bad debts and improve banks’ willingness to lend.

Easier access to credit and an improved business facilitation regime can help address the investment slump that’s threatening to derail India’s growth story. Attention must be focused on addressing the major concerns of industries that possess high backward and forward linkages. Real estate, textile, food processing, electronics and tourism, for example, have these linkages, and they can add another 1 or 2 percent to India’s GDP, create many more new jobs in the process and aid consumption.