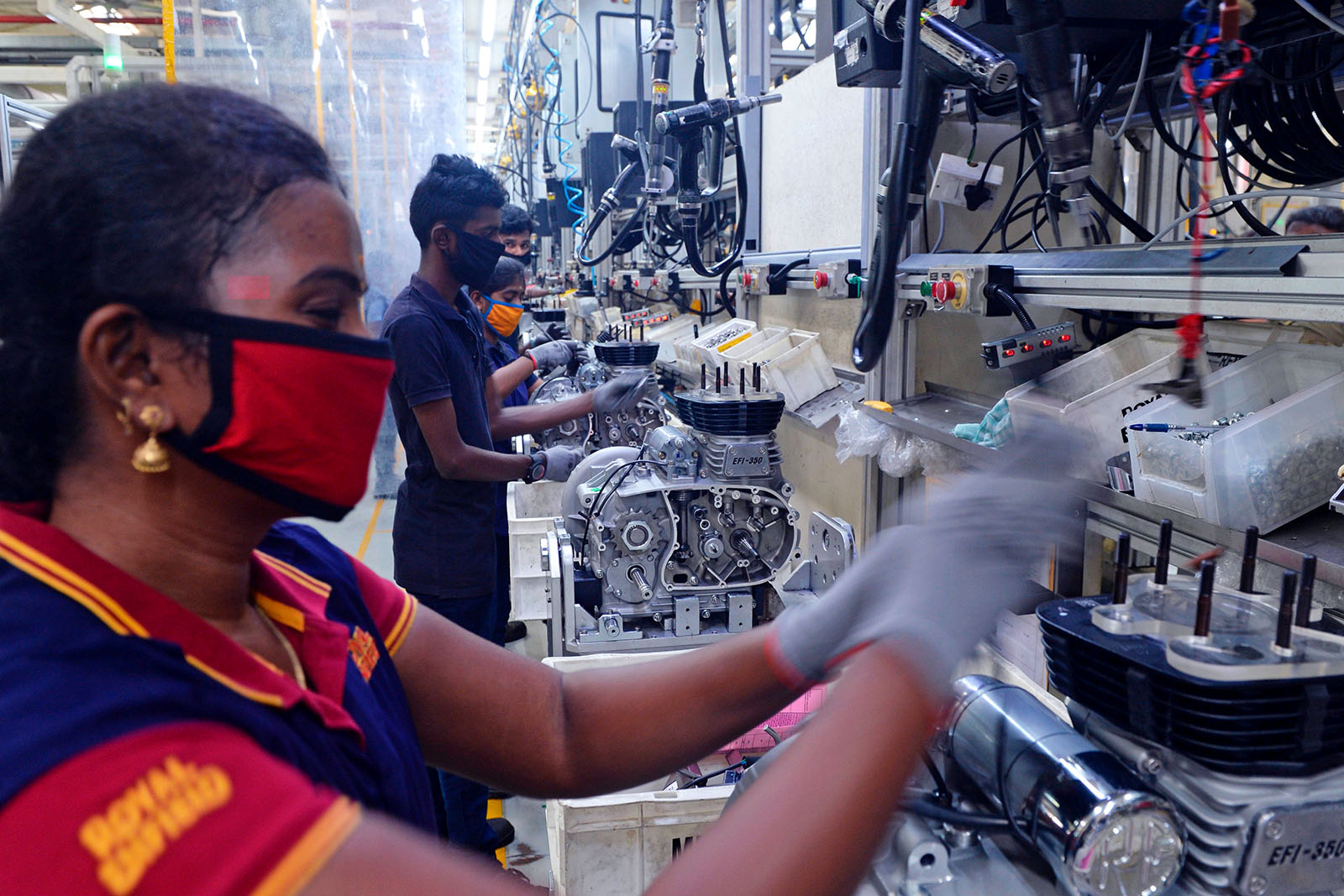 Workers assemble motorcycles inside a factory in Oragadam, Tami Nadu on June 2020. Will Self-Reliant India embrace globalization or be a road to economic nationalism?

Addressing the nation on the COVID-19 pandemic recovery on May 12, Prime Minister Narendra Modi announced a historic $266 trillion stimulus package and advocated a new concept of “Self-Reliant India.”

He said there are five pillars of becoming self-reliant: economy, infrastructure, system, demography and demand. These, he said, will bring a quantum jump in the Indian economy.

Infrastructure “should become the identity of India,” the prime minister said in his address.  He touched on the idea that “the system should be based on 21st-century technology,” that “a vibrant demography is the source of energy for a self-reliant India,” and that “the supply chain should be utilized to full capacity to meet strong demand,” according to an article in the Economic Times. “These changes would promote business, attract investment, and further strengthen the Make in India mission,” said Prime Minister Modi.

Apart from providing near-term working capital, loan financing and tax holidays for small businesses during an unprecedented health crisis, the announced fiscal stimulus — which amounts to nearly 10% of GDP — lays down a bold intent to reenergize, revamp and reinforce a strong industrial manufacturing sector for India’s long-term growth in a post-COVID era.

India is often considered a poster child for emerging economies based on its success in achieving high growth rates, despite almost skipping the industrial manufacturing phase. The services sector has been the fastest growing sector since the 1990s, while manufacturing’s share has stagnated between 14-16% since the 1970s. Agriculture, despite growing only 3% per year, accounts for more than 50% of employment.

Back in 2014, Prime Minister Modi came up with the “Make in India” initiative, with the identification of sectors such as automobiles, chemicals, information technology, pharmaceuticals, textiles, ports, aviation, leather, tourism and hospitality, wellness and railways, among others, as growth drivers and appropriating sector-specific foreign direct investment (FDI) policies.

Subsequently, India’s ranking in ease of doing business and competitiveness improved, and it has become an assembly hub in manufacturing industries such as mobile phones, light consumer electronics and pharmaceutical products.

Nonetheless, the domestic value addition of imported components continued to be low at less than 30%. With the catchphrase and marketing pitch of “Make in India 1.0,” India moved in the right direction, but not enough.

The new “Self-Reliant India” drive is likely to press for vertical integration, where the components of regional supply chains are coerced to help domestic companies scale up and become competitive in the longer run.

‘Self-Reliant India’ is not only beneficial for India in moving forward, but also for many other emerging economies in the region to build a better sustainable future.

The economic rationale behind this is to generate learning, which leads to efficiency gains, but the economic history of this approach has been mixed. Self-reliance in state-run heavy industries such as steel and strategic sectors such as railways, in the decades following independence, had placed India ahead of the most developing countries in the world. However, since the 1970s, India has not been able to modernize these industries to climb high up the technological ladder.

Left Behind by China

India completely missed out on the third industrial revolution, which comprised the manufacturing of electronic goods, microprocessors, personal computers, mobile phones, and decentralized manufacturing, and it failed to become part of global value chains or regional production networks.

Learning from Japan’s post-war success, East Asian countries such as South Korea, Taiwan, Singapore and, later, China took huge technological and industrial strides since the 1980s. They determinedly moved up in the global value chains in electronic goods, consumer durables, automobiles and heavy machinery. They have also developed manufacturing capacities in advanced technologies in niche areas such as robotics.

Their self-reliant capabilities were enabled by planned state investments in research and development (3%-5% of GDP), vocational education and skill development (4%-5%), targeted incentives to private corporations (5%-8%) and priority spending on infrastructure connectivity (8%-12%).

The Fifth Industrial Revolution Is Still Within Reach

Unfortunately, India may have missed the opportunity in many of these manufacturing industries in which the United States, Europe and East Asia have established insurmountable leads. Yet self-reliant capabilities in artificial intelligence, biotechnology,  electric and fuel cell vehicles, electricity storage systems, green energy, pharma, municipal solid waste management, prefabricated housing supercomputing, space communication and others are within its reach, but it needs a strategic focus and some sharp innovations.

Both the central and state governments should redirect macro-economic policies, incentives, FDI regulations and intellectual property rights toward building cohesive and comprehensive manufacturing ecosystems for the sectors that have a competitive advantage in the local and global markets.

Second, large-scale concerted endeavors are needed to ramp up the research and development expenditure, including vocational education and skill development for its young workforce, to increase the share of manufacturing in GDP. State-funded industrial research by national institutes, universities and public sector enterprises are to be scaled up significantly, well above the current dismal 1% of GDP. Private sector-driven, delivery-oriented innovation networks also need public support for meaningful participation in manufacturing at appropriate levels of supply chain.

Avoid the Temptation of Economic Nationalism

Third, existing free trade agreements should be recalibrated to tap into export potential of micro-, small- and medium-sized enterprises. India’s use ratio of the bilateral trade agreements remains as low as 16%. To reinforce the economy toward full use of global demand, the channelization of FTAs and India’s support for the successful conclusion of mega trade agreements like the Regional Comprehensive Economic Partnership become critical.

When complex economic systems come to a critical point of instability, they remerge in distinctly new forms. Driving self-reliance while combating COVID-19 is a blessing in disguise for India. With appropriate policy reforms and partnerships, there exist significant socioeconomic opportunities.

“Self-Reliant India” is not only beneficial for India in moving forward, but also for many other emerging economies in the region to build a better sustainable future. This dynamic concept should embrace the inevitability of globalization and not be a road to economic nationalism.