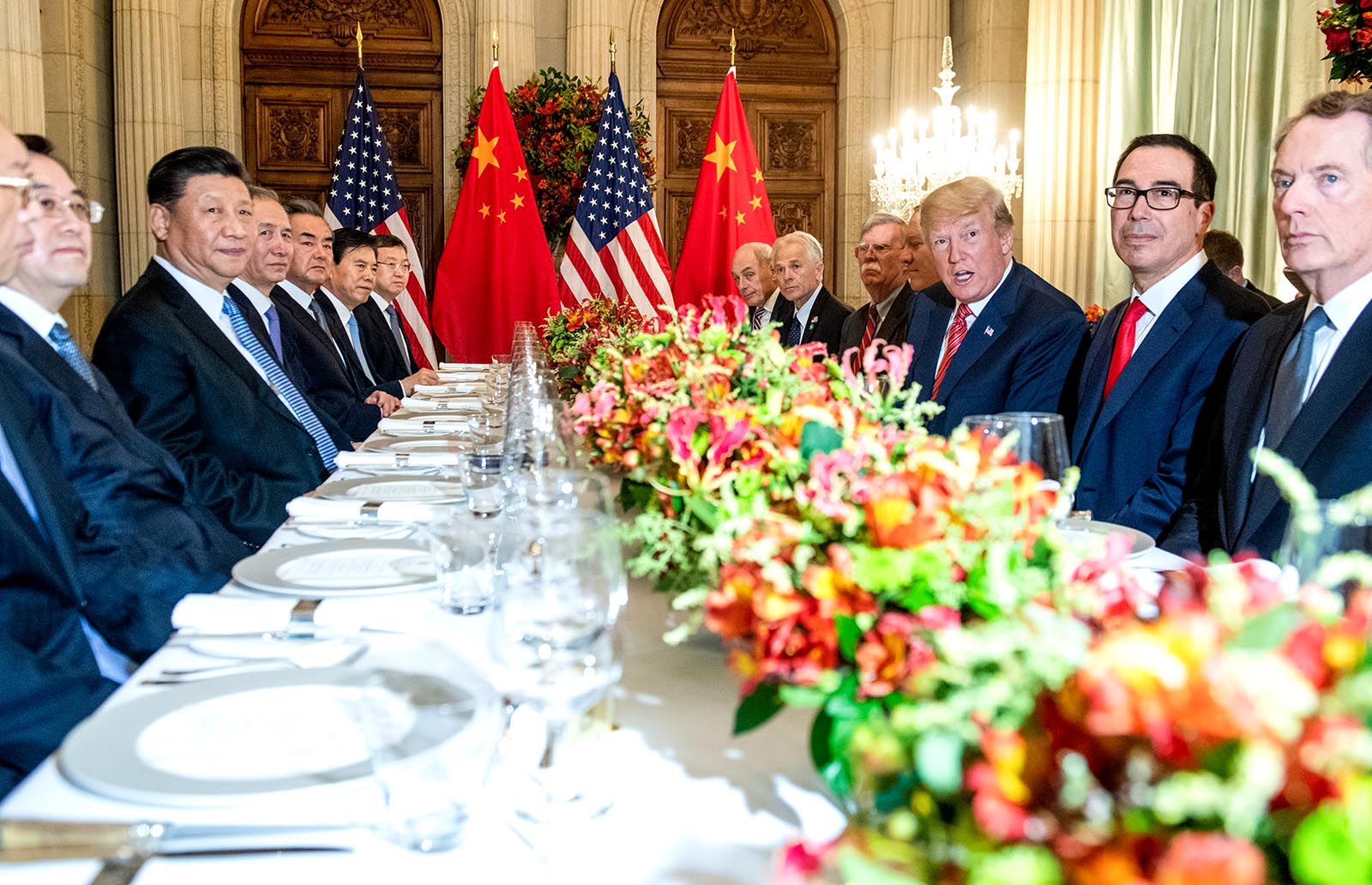 The United States delegation holds a dinner meeting with Chinese government representatives at the end of the G-20 Leaders' Summit in Buenos Aires. China’s recognition of the structural features of the U.S.-led trade war has brought about a drastic change in its response to the U.S.

The truce agreed on by China and the United States at the sidelines of the recent G-20 meeting in Buenos Aires doesn’t really change the picture of the U.S.’s ultimate goal of containing China. The reason is straightforward: The U.S. and China have become strategic competitors and will continue to be so for the foreseeable future, which leaves little room for any long-term settlement of disputes.

China’s recognition of the much more structural features of the U.S.-led trade war has also brought about a drastic change in its response to the U.S.

China has shifted from a tit-for-tat tactic based on retaliatory measures on trade to a three-pole strategy: sustaining domestic growth at any cost, finding alliances externally, and accelerating China’s upgrade of its technology capacity.

First and foremost, China needs to cushion its structural deceleration in growth. The problem became more acute in 2018 because of a much worsened sentiment stemming from the U.S.-led trade war. So far, monetary easing and a half-hearted fiscal stimulus have taken place in 2018, but neither has been enough to stop the deceleration of the economy. In fact, the announced 1.3 trillion yuan cuts in taxes ($188 billion) do not seem to have been effective in stimulating the economy, and fiscal expenditure has not expanded, either.

The latter may be related to the increasingly tighter control of the central government on the investment of local governments, especially the clamp down on shadow banking, as well as the fear of President Xi Jinping’s anti-corruption campaign. On the monetary side, the liquidity injected by the People’s Bank of China (PBoC) since the spring to lower the cost of funding across the board has not been effective beyond the money market. In fact, private companies, in particular, have not profited from the reduction in the cost of funding.

Stimulating the Economy, Whatever It Takes

Given the above and the increasingly worrisome data on the investment and even the consumption front, China has no choice but to pull out all the stops and stimulate the economy. On the fiscal front, China is coming back to the quick fix—namely increasing infrastructure investment by allowing local governments to leverage further.

China’s realization of the structural nature of its competition with the U.S. has led the Chinese authorities to a more strategic, rather than tactical, response.

Given the size of the stimulus, China should be able to achieve a stabilization of growth or, at least, a moderate deceleration in 2019. This will constitute the best response to the U.S. containment, but we cannot forget that the sustainability of such growth is the key question mark down the road. In fact, leverage will only increase as the economy is stimulated through demand policies once again.

First, it needs to embrace more alliances, especially with the largest economies in the world. The European Union is the most obvious target, as its economic size as a bloc is comparable to that of the U.S. or China. This explains China’s recent push to improve its economic relations with the EU and with individual member states—the so-called 16+1 platform, composed of 16 Eastern European and Balkan countries and China is a good example as is President Xi’s recent trip to Spain and Portugal. The recently improved relationship with Japan is also clear in the light of China’s frantic quest for alliances.

China’s second external objective—to achieve self-reliance by reducing its technology gap with the developed world—can be achieved more easily (or more quickly) by purchasing technology abroad. This would push China’s M&A activity to a further high, at least in the sectors targeted in China’s medium-term industrial strategy, Made in China 2025. The increasingly wary attitude of the U.S administration, along with other developed countries including Japan and Korea, makes the EU an easier target—although protection against China’s M&A is also on the rise in the EU.

All in all, China’s realization of the structural nature of its competition with the U.S. has led the Chinese authorities to a more strategic, rather than tactical, response to the U.S. containment push, which has characterized Sino-American bilateral relations since the beginning of the year.

More specifically, from a tit-for-tat retaliatory tactic, China is now focusing on pushing growth domestically, even if it requires pulling out all the stops and finding alliances externally while it accelerates its technological self-reliance through the acquisition of technology, especially in Europe.