How Should Asia Address Its Urban Pollution Challenge? 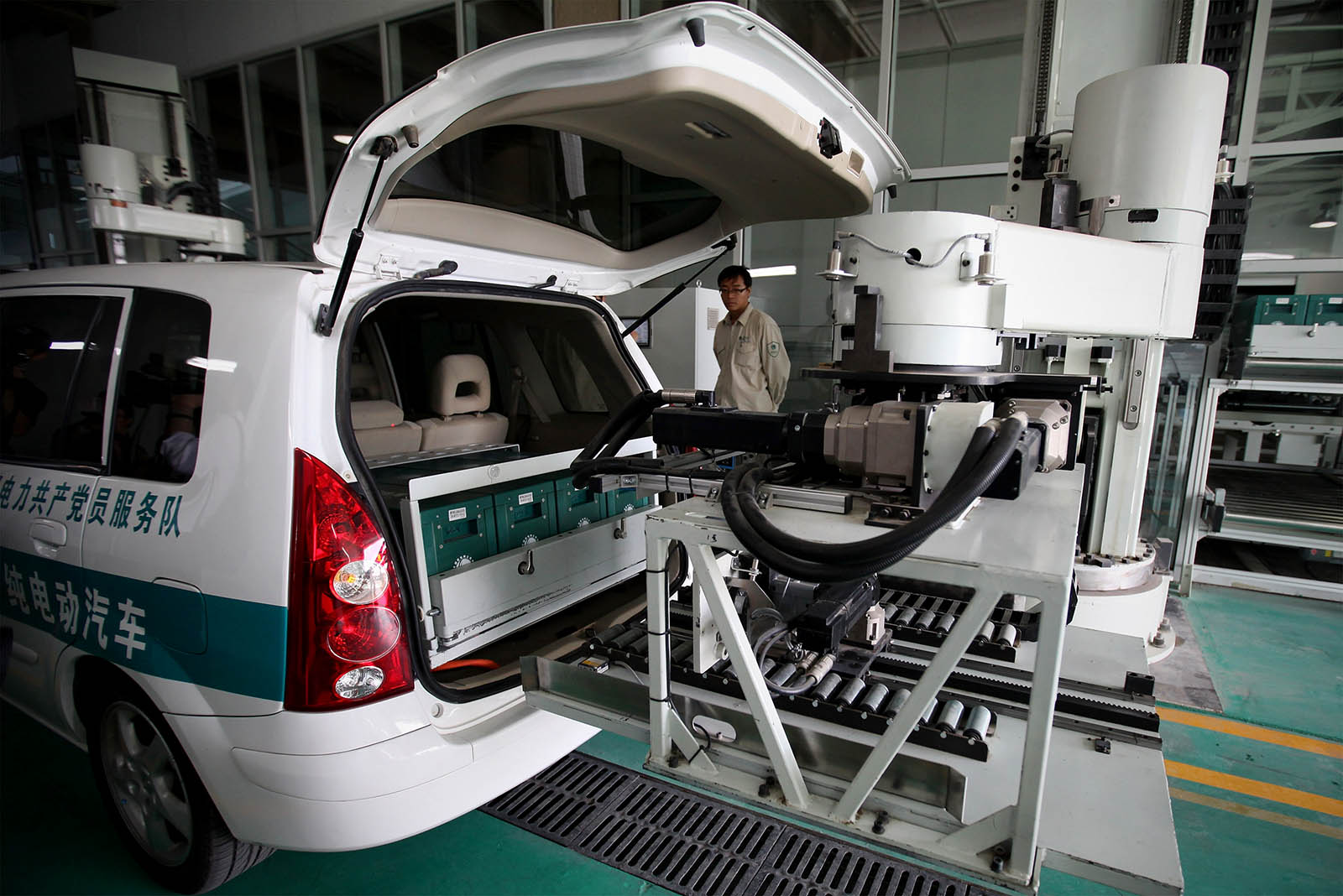 A Chinese worker watches as a robot changes the batteries in an electric car at China's largest electric vehicle battery recharging station in Beijing.

Major cities in Asia and around the world are often shrouded by smog, and this can be exacerbated if they are located in a valley, sheltered from wind. This dirty fog becomes dangerous when sunlight reacts with nitrogen compounds often emitted from vehicle exhaust, especially from diesel, as it forms ozone that attacks weak respiratory systems.

People in many parts of the world have clamored for change, and so mayors and governments have responded by restricting city access for cars, especially diesel cars. Governments have pressed further recently, some of them saying they will ban the sale of fossil-fuel-powered vehicles by 2030-2040 and stating that non-polluting battery-powered vehicles should become the norm. The Chinese government, for example, has championed electric vehicles for some time and has stated it wishes to become the world’s largest EV manufacturer.

Carbon dioxide was blamed initially for raising global atmospheric temperatures, but it is now accepted that there are many “greenhouse gasses,” and a formula combines their deleterious effects into one criterion, known as the “carbon footprint.” As all nations vary in their state of development, so does their level of industrial pollution, their modes of electricity production, their buildings’ insulation, and their transport-pollution profile; thus, their pollution-control regimes also vary.

China, the world’s most populous country, massively productive, and with the world’s largest network of electrified railways, consumes more electricity than any other country. However, it is also the world’s biggest solar energy producer—and so an increasing proportion of its electricity can be said to have “zero emissions.” China is very active in reducing its carbon footprint and acknowledged that this is a difficult administrative task as it has a devolved administrative structure from the central government, through its provinces and cities to its people.

Nevertheless, British climate economist Nicholas Stern and analyst Fergus Green have opined that China’s greenhouse gas emissions are likely to peak by 2025 or earlier, as opposed to 2030 as previously thought. The government’s pressure to produce more EVs will accelerate its overall greening process.

Many vehicle manufacturers around the world have rushed to create non-polluting EVs to reduce their products’ average pollution. But their arguments have become as opaque as the smog itself—becoming conflated with autonomous cars and the reduction of car ownership as people move to car sharing or Uber-like taxi-on-demand systems using EVs.

U.S. President Donald Trump’s administration is confounding the issue by looking to roll back former president Barack Obama’s order that the U.S. Environmental Protection Agency mandate fleet gasoline consumption should be over 50 miles per gallon. U.S. manufacturers had begun introducing EVs to reduce their average gasoline consumption—but now, if rules are relaxed, they may cut their R&D on EVs. This would be a retrograde step.

The Chinese government calls all battery vehicles “new-energy vehicles” and total domestic NEV sales are expected to soon reach above 1 million units per year. BAIC BJEV, a leading EV manufacturer, is expanding production into South Africa and is lifting its total production to 800,000 cars per year. The Chinese government is offering subsidies to EV purchasers, like all governments when stimulating new markets via subsidies, but it knows it needs to reduce these subsidies to zero once a critical mass is reached.

A recent study found that woodburning, even in efficient stoves, can cause as much mortality as car fumes.

In China the time for this is nearing, and subsidies are being reduced. The government is also going to overseas NEV firms soon to start manufacturing in China, increasing competition. Moreover, the presence of foreign automotive producers will also result in transfers of technology and bring greater R&D activity.

Banning Fossil-Fuel-Powered Cars not a Panacea

The reactions by cities and government leaders against cars in cities have possibly been misdirected under pressure from global populist groups at times. As the developed world’s health has improved, people live longer and succumb mainly to diseases associated with old age, especially cancer. Autopsies have revealed a greater incidence of small particulates, such as PM2.5, in lungs allegedly caused by car emissions in cities. The populist reaction is to ban these cars, but this may have unintended consequences and may be based on erroneous data. More research is needed, quickly. And we should promote informed discussion to counter the hysteria of populism.

Recent analysis in Sweden has found that woodburning, even in efficient stoves, can cause as much mortality as car fumes. The researchers state that the main sources of PM2.5 emissions are from tire and brake wear in road vehicles, construction and woodburning.

The researchers also say that EVs can possibly contribute larger amounts of PM2.5 from their tires and brakes than standard cars because EVs are heavier. This situation is likely to be the same throughout Europe. Furthermore, surveys such as one in the UK show an underestimation of woodburning in domestic stoves, which is increasing due to a more affluent middle class indulgently recalling an earlier epoch of roaring wood fires.

By all means clean up engine exhausts and bring these rules into long-term growth plans, as in China’s 13th Five-Year Plan (2016-20), which looks to develop environmental technology, ecological living and ecological culture. Environmental protection and green development were prominent themes at the 19th National Congress of the Communist Party of China last month, too.

But we must be careful not to cripple globalization by halting the global diesel industry that manufactures all agricultural, marine, rail and commercial road-freight engines by succumbing to popular demands: Do not force people to buy only EVs in this evolving transition phase. We must accept that new inventions will take years to be satisfactorily commercialized. Realistically, it may be better to press for behavioral change—to get people to walk, ride a bike or to use public transport instead.

A version of this piece has appeared in the Global Times.

Swenja Surminski Managing Director, Climate and Sustainability at Marsh McLennan Advantage
URL: https://www.brinknews.com/how-should-asia-address-its-urban-pollution-challenge/
Get ahead in a rapidly changing world. Sign up for our daily newsletter. Subscribe
​​