Is the Future of Farming Vertical? 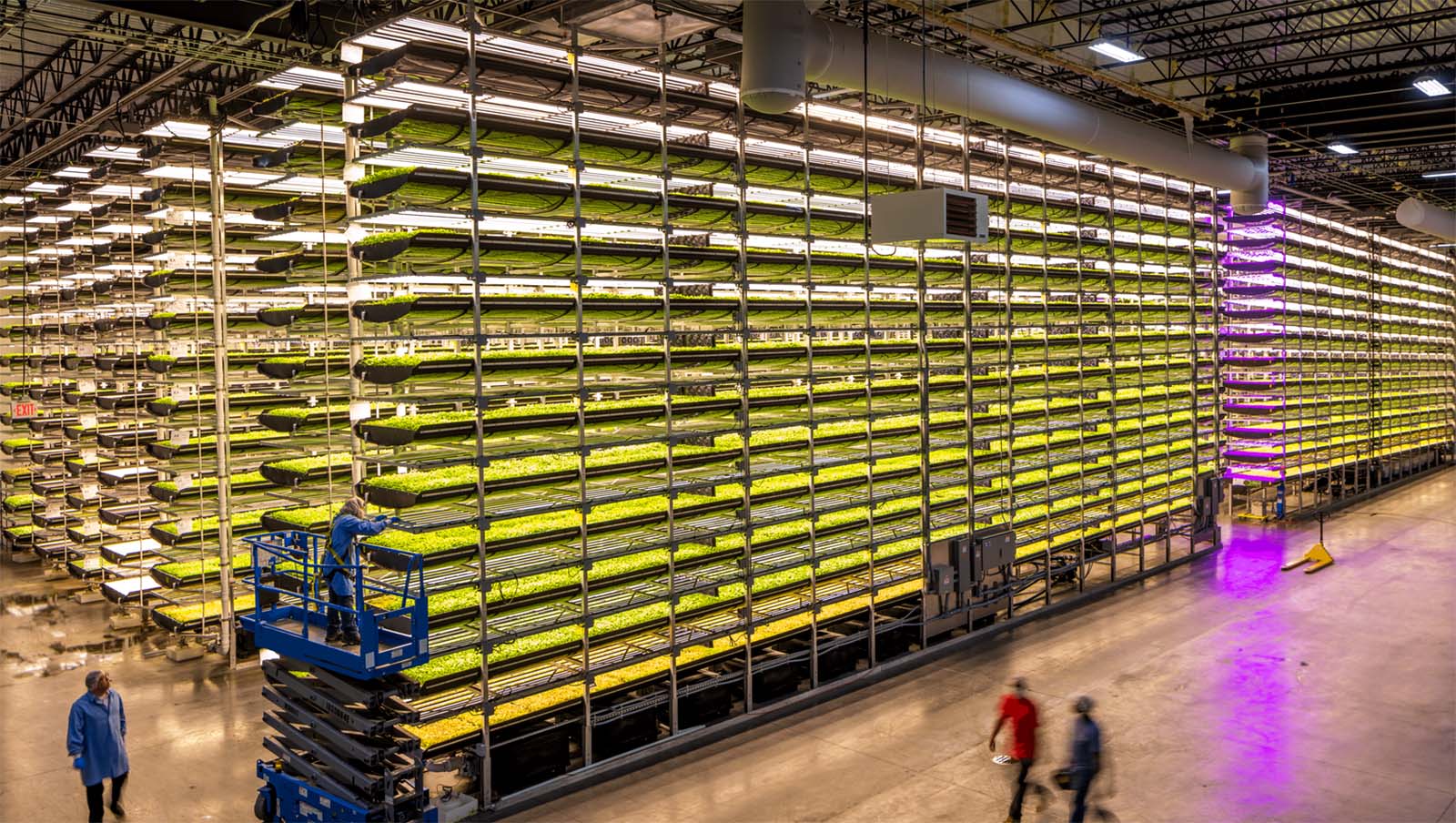 A century ago, fresh produce had no choice but to be local and seasonal, but technology changed all of that. Innovations in refrigeration and transportation allowed food production to concentrate in regions that could produce a wider variety of crops all year round. Today, the U.S. has a third as many farms and three times as many people as it did a century ago.

Our food is coming from fewer places, but feeding more people, most of whom live in cities. Three states—California, Arizona, and Florida—produce more than three-quarters of the nation’s vegetables, measured by value. California alone produces 400 different commodities, including one-third of all U.S. fresh fruits and vegetables and two-thirds of all the nuts.

The Pressure of Climate Change

Once again, America is having to rethink where and how it produces its food. In the 21st century, the U.S. food system is likely to change even more than it did in the past century. Because of climate change, major production areas such as California will experience extremes in temperature and precipitation, generally growing hotter and drier—and all at a pace that appears to be happening sooner than predicted.

The U.S. food system needs to diversify production. But instead of expanding into grasslands or areas already used for other crops, we should think about growing food at scale in big cities. Would our food system benefit from “vertical farms”? And if so, can we seize an opportunity to use existing, stranded assets?

Are Vertical Farms the Answer?

Vertical farms are usually indoor operations with stacked or wall-like planters that leverage networked technology to monitor and nourish plants precisely, often without the use of soil.

AeroFarms is one notable vertical farm, headquartered in a former steel mill in Newark, New Jersey. Though its flagship farm was only seeded in September 2016, it reports yielding up to 1,000 tons of greens per acre in a year. Plenty Inc. has vertical farms just outside of San Francisco and Seattle and uses 20-foot-high walls, from which the company reports significantly higher yields and less water use than conventional agriculture. With the costs of production coming down, it claims to offer “Whole Foods quality at Walmart prices.”

Thermal power plants have qualities that make them inherently amenable to vertical farming. They consume about 45 to 50 percent of all the water used to cool plants during power generation. Disposing of the hot water is both a nuisance and a cost. Heat, water, energy and captured slipstream emissions are all byproducts of energy generation and could be available for producing food.

By creating vertical, urban food production, we can give consumers what they want: local food that’s produced transparently and sustainably.

There are social advantages, too. In most urban areas, thermal power plants are surrounded by low-value brownfields that have little or no productive use. Many have had to be been taken over by cities for back taxes, and they are usually in “food deserts”—poor neighborhoods with little to no access to grocery stores with fresh produce. These areas could benefit from vertical farms and fresh produce.

Cutting Down on Waste

While there’s a perception that local food has a smaller carbon footprint because it travels shorter distances from farm to table, research shows that transportation comprises a small portion of food’s greenhouse gas emissions. That said, moving food production closer to consumers would still deliver environmental benefits by reducing waste.

About a third of the food that’s produced around the world is wasted. Estimates are slightly higher in the U.S., where as much as half of the fruits and vegetables grown in the U.S. are not eaten.

They are lost or wasted in the field, in transit, in supermarkets, in food service, and in the home—a waste not only of food, but also of the land, water, energy, greenhouse gases, fertilizer, soil and other resources associated with producing it. If produce could be grown closer to where it’s consumed, it could shorten the time between harvest and sale by two or three weeks, extend the life in the home, and reduce waste significantly.

Narrowing the Gap between Farm and Table …

Finally, vertical farming can create business opportunities. The centralization and specialization of food production has put considerable distance between consumers and their food, both figuratively and literally. By creating vertical, urban food production, we can narrow that gap and give more consumers what they want: local food that’s produced more transparently and sustainably, that is, with less waste and fewer impacts.

… But More Research Is Needed

How much energy is needed to grow food without the sun or soil? How much will it cost? How much better is vertical farming in terms of net greenhouse gas emissions for food consumed? If urban, vertical farming takes the risks—precipitation, severe storms, heat and cold—out of farming, will large companies dominate the food system even more than they do today? Can communities be engaged to ensure a more equitable and inclusive food system? And, all these questions aside, what are the most likely unintended consequences? The sooner we answer these questions, the sooner we can act.

Many parties have vested interests in the answers: Power companies can benefit from added value; retailers can benefit from shorter supply chains and reduced waste; government agencies can improve local food systems; communities can eliminate their food deserts; tech companies can drive research and development; and academics and research institutions can build capacity about new ways to grow our food.

The biggest threat to protecting biodiversity and critical ecosystem functions is where and how we produce food. As long as we depend on soil to produce food, we will require more and more land and greater surpluses to feed everyone. Producing food in cities could be part of the solution by producing more with less which would relieve pressure on the natural resource base.