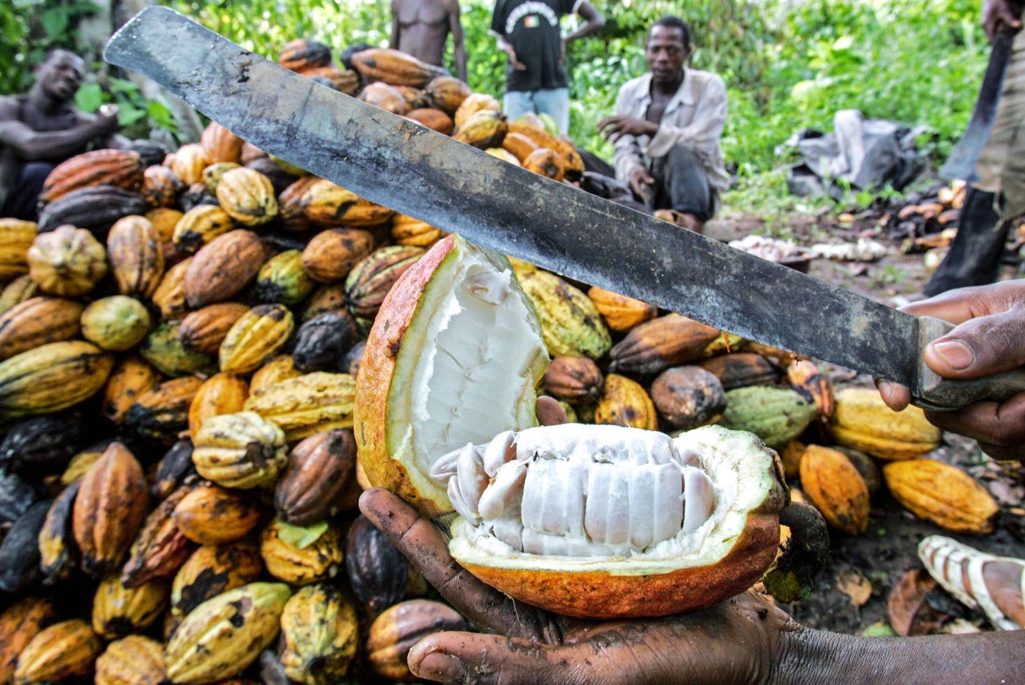 Workers cut cocoa in the southwestern Ivorian village of Godilehiri. Ivory Coast is the world's leading producer of cocoa, which along with coffee accounts for 40 percent of the country's exports and about 20 percent of gross domestic product.

Twenty-eight years ago, I helped create Rainforest Crunch with Ben & Jerry’s. The goal was to use the sale of candy and ice cream to prove that rainforests are more valuable intact than when the land is cleared for ranching. Today, however, cocoa is a leading cause of deforestation. Here’s why: Last year, global cocoa production fell 100,000 metrics tons (MT) below annual consumption.

By 2030, that deficit in cocoa production could reach 2 million MT if nothing is done to fix the problem. At the nexus of aged trees, even older producers, smallholder dilemmas and climate change, cocoa will either become a model for sustainable production or a cautionary tale for other commodities.

The world loves chocolate. We consume close to 3 million tons of cocoa products a year; each Swiss citizen alone consumes more than 20 pounds of chocolate a year.

For all the emotion it elicits, cocoa is as much about purse strings as it is about heart strings. With a global market valued at around $100 billion in 2015, cocoa production employs between five and six million farmers, mostly smallholders living on less than $1.25 a day. Tens of millions of people depend on it for their livelihoods.

Yet cocoa is in crisis. In addition to declining productivity, the world’s cocoa plantations are well beyond their most productive years, and those who produce it are even older. Income from cocoa is so low that young people do not want to become cocoa farmers. Then there is climate change: By 2030, West Africa, where 70 percent of the world’s cocoa is produced, will be significantly less suited for production than it is today.

The cocoa industry will not survive in its current form, and in the next two decades, what is happening in cocoa will likely become the norm across other key commodities, particularly other tree crops produced by smallholders.

Fortunately, the seeds of change already exist to transform the cocoa sector. It will only take a few key actors working together to make this happen. If we get cocoa right, it could become the test case for new strategies to produce other tree crops more sustainably, not only to feed future generations, but to make smallholder farmers more viable.

Cocoa is in crisis as productivity plummets, but change exists. If we get it right, it’s a model for sustainability.

A Crisis in Cocoa

The bulk of the world’s cocoa plantations are 10-20 years beyond peak production. The biggest challenge facing production is that cocoa is generally not replanted on the same land. Traditionally, production has been increased by expanding production into new areas through the clearing of tropical forests to create new plantations; however, deforestation is no longer acceptable for consumers, retailers or brands.

The social costs of “business as usual” are equally high. Increasing demand and decreasing production are huge drivers of illegality in the sector, particularly child labor and deforestation. A report last year by the U.S. Department of Labor noted that, because of increased demand, “21 percent more children are illegally laboring on cocoa farms in Ghana and Cote d’Ivoire than five years ago.”

Just as important, however, is the fact that cocoa farmers in Cote d’Ivoire and Ghana earn the equivalent of only $0.54 and $0.82 per day cultivating the crop. Meanwhile, in Cote D’Ivoire, it is estimated that 70 percent of illegal deforestation is related to planting cocoa, with 12 percent of the country’s cocoa now produced within national parks.

These are all tough, systemic problems. They are beyond the control of any single actor, but not the sector. Like many problems, they must be solved together. This is true of most sustainability issues.

Let’s be clear: The cocoa industry is not doomed. The key players recognize that several problems need to be dealt with. Collectively, they have spent hundreds of millions of dollars to address them, through certification programs as well as separate and collaborative strategies within supply chains and across sector-wide platforms. While the results have not moved the needle at the speed or scale required, at least there is consensus within the industry that a new approach is needed.

Here is why I think the cocoa sector is well-positioned to rehabilitate itself: The industry is concentrated in only a few players and a few countries; it has new tools and planting materials; demand is growing beyond supply; consumer interest in sustainable cocoa has increased and overall demand has increased.

So what’s the issue? All the pieces are there, but no one had turned the kaleidoscope a notch or two to see what is possible. What is missing is a new mindset: the willingness to do whatever it takes to help the industry turn the corner. That means unlikely partnerships: companies such as Mars, Nestle and Mondelez; Cargill, Barry Callebaut and Dreyfus. It also means companies and governments working together in pre-competitive approaches to replant cocoa plantations where they already are and rehabilitate those degraded soils.

Pre-competitive approaches to create more sustainable supply chains like the members of Bord Bia in Ireland, the Consumer Goods Forum and the Global Salmon Initiative are becoming more common, but they are not easy. Industry participants need a reason to work together as well as ways to work together if they are going to use the market to transform their industry.

So what does a credible, pre-competitive strategy to transform the cocoa sector look like?

First, start with where there is the most leverage: in Cote D’Ivoire, the largest cocoa producer. Change it and you change the industry. It has the oldest plantations, the oldest farmers, the lowest productivity, the lowest producer income per day and the highest rates of child labor. It also has the most production inside protected areas and the highest overall production globally.

Second, demand that each player does what it is supposed to do, but do it better. Producers produce cocoa, governments enforce the law, traders buy and sell products, banks finance and retailers and brands create demand. The system will be transformed when each does its job better. This will shift the entire industry.

Third, start with a demand signal. “Build it and they will come” was never a good strategy for producers. To transform cocoa, we need demand. Companies need to send a strong signal. They could agree to pay a premium per ton of product to jumpstart replanting—this could be $100, $500 or even $1,000 per ton. Long-term contracts (7-10 years) could also be a catalyst. Don’t include price in the contracts; rather include a price-finding mechanism (e.g. one or more spot market prices on the day of sale, etc.). Or, they could do both. The question is, why would the producers of what becomes a little luxury in so many lives receive so little for their work?

Fourth, use the contracts to buy down the risk of investing in more sustainable production. The traders and the banks need to lead this, however, not the brands. Brands know nothing about production and development on the ground. Again, let each player do what it does best. Long-term contracts send a very clear message up the supply chain: “We are partners, not adversaries, and all our futures depend on getting this right. We will work with you to do that.”

The clock is ticking on cocoa. The question is whether the industry can work together to revitalize itself in time.

Fifth, use the funds to support producer access to improved planting materials and other inputs they need to replant existing plantations or rehabilitate them if they are degraded. The mechanism can be customized for different types of growers with different needs. In addition to replanting costs, funds should be available to cover the living costs of producers until their new crops are economically viable. At this time, it is difficult, if not impossible, for smallholders to find financial institutions that will accept long-term contracts as collateral.

Sixth, when companies invest in the future production of a country, they expect the local government to hold up its end of the bargain. Address illegality once and for all: illegal deforestation, the sovereignty of national parks, illegal cross-border sales, slavery and illegal child labor.

Seventh, leverage both the product demand and long-term contracts to bring insurance companies to the table. These actors can help identify or develop the appropriate insurance and financial tools to address side selling, crop insurance and life insurance for producers.

Finally, develop ways to deliver inputs and planting materials directly to smallholders (fertilizer, seeds, grafts or shoots) and train them to use these correctly. This is the most critical aspect of the strategy; it is also the hardest part. There will have to be engagement across the value chain, especially with producer groups, traders and aggregators that are able to reach individual producers most effectively. Since there is no single best way to work with associations and producers, it will be important to respect the differences and find ways to make each work. The focus here, however, should be on the results, not how to achieve them.

Any transformational change in cocoa will take place against the backdrop of what World Wildlife Fund describes as the “$200 Billion Gap.” As of 2015, private sector companies (traders, retailers and brands) have committed to sourcing more than $450 billion of sustainably produced raw materials by 2020.

Producers, including millions of smallholders across the globe, currently produce only 60 percent of those commitments. Like cocoa producers, they lack access to the inputs and the capital they need to invest in more sustainable practices.

This is why getting cocoa right, as a proof of concept for a new theory of change, holds such promise for other commodities, such as palm oil, soy and shrimp. If we can empower cocoa producers to tap into the demand for sustainable production, we can begin to move the needle at the scale required—and set the stage to replicate that success in other sectors, too.

The Clock Is Ticking

The clock is ticking on cocoa; 2030 is only 14 years away. The question is whether the industry can work together to revitalize itself in time.

We have the tools, the business models and the opportunity to get it right. Together, we can rehabilitate aging plantations and create a viable future for the next generation of producers. We can provide the needed inputs to optimize performance—not just for cocoa, but for food production more generally.

Alan Jenn Assistant Professional Researcher at The Institute of Transportation Studies at the University of California, Davis
URL: https://www.brinknews.com/rainforest-crunch-cocoa-and-deforestation-its-time-to-shift-the-paradigm/
Get ahead in a rapidly changing world. Sign up for our daily newsletter. Subscribe
​​