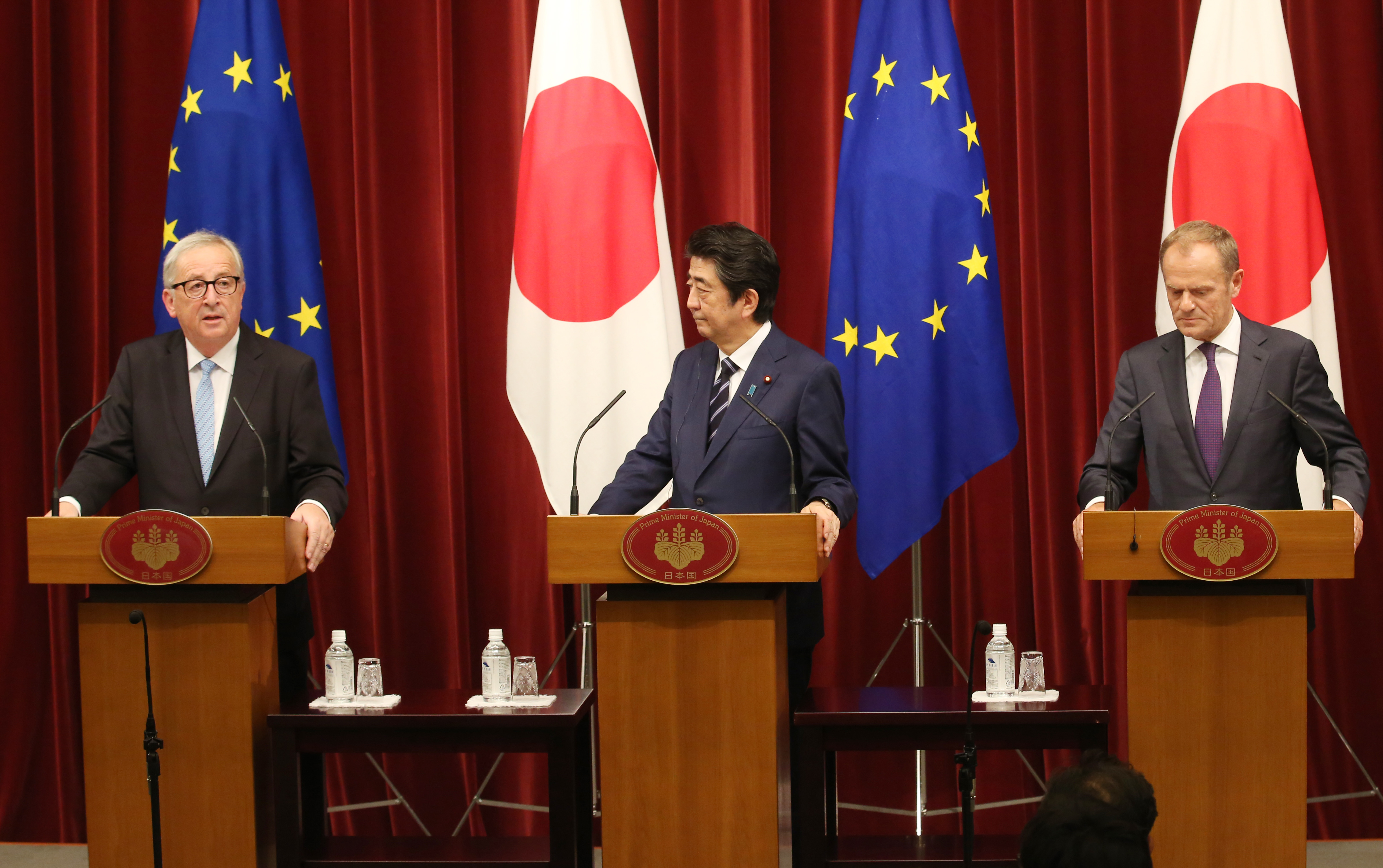 With “America First,” the current U.S. administration is undermining the multilateral rules-based order and shifting toward unilateralism in its external policy. This is particularly clear in the area of trade and commercial relations as one of President Donald Trump’s first acts after assuming office was to pull America out of the Trans-Pacific Partnership agreement and to seek the re-negotiation of the North American Free Trade Agreement. Of late, the charge against free trade has increased through the imposing of unilateral tariffs on trading partners, unleashing the threat of trade wars.

Facing the U.S.’s turn to protectionism, the EU and Japan have stepped up efforts to defend the rules-based international trading regime. At the EU-Japan Summit held in Brussels on July 17, the world’s largest trading bloc and the world’s third-largest economy showed that they remain committed to free trade with the signing of the EU-Japan Economic Partnership Agreement (EPA). This mega trade deal, creating a free-trade zone covering 600 million people and accounting for a third of global GDP, when ratified, will not only benefit the EU and Japan, but it’ll be an important signal that they stand ready to take on the mantle to defend open and free trade.

Steps To Protecting the Multilateral Order

Of late, both the EU and Japan have been actively pursuing free-trade agreements around the world to push back against U.S. protectionist antics. Japan had, for instance, stepped in to save the TPP when the U.S. pulled out of the TPP. Together with 10 other partners, a reconstituted TPP-11, known as the Comprehensive and Progressive Agreement for Trans-Pacific Partnership, was finalized at the end of 2017, and the process of ratification has begun.

The EU has also made clear its intention to deepen economic diplomacy in the Asia-Pacific and step up efforts to negotiate free-trade agreements with Asian partners. Besides the EU-Japan EPA, FTA negotiations have been concluded with Singapore and Vietnam and are ongoing with several other members of the Association of Southeast Asian Nations. In June this year, the EU launched negotiations with Australia and New Zealand.

Facing the U.S.’s turn to protectionism, the EU and Japan have stepped up efforts to defend the rules-based international trading regime.

At a time of great uncertainty posed by the backlash against free trade and globalization, the mere fact that the EU and Japan, two major economic powers, are reaffirming their support for free and open trade to deliver on economic growth and development, sends an important signal for other smaller economies to keep faith in the system. Ideally, it will also unify other economic players against unilateral measures by the U.S. to undermine the economic order.

Implications of the EU-Japan Pact

In parallel with the EU-Japan EPA, the EU and Japan also signed a strategic partnership agreement (SPA) during the summit. The significance of the EU-Japan EPA and SPA goes beyond the mutual benefits in bilateral relations between EU and Japan. At a time of geopolitical competition and strategic uncertainties, the SPA offers the EU an incentive and foothold into becoming a more strategic actor in Asia. For Japan, unnerved by the current U.S. administration’s disregard for its security allies and alliances, the SPA offers an opportunity to diversify its foreign and security policy and be more independent in its external relations.

As the EU and Japan deepen their economic and political cooperation and boost exchanges on security and defense matters, their strategic relevance will also be enhanced, particularly in Asia, where both are already important economic players.

A stronger EU-Japan partnership not only makes both parties better off economically, but can help to reinforce the strength and capacity to reinvigorate the rule-based multilateral order. The strategic autonomy of the EU and Japan, thus far too dependent on the U.S., can be reinforced as they learn from each other through their increased engagement. In partnership, they are also better placed to leverage on each other’s strength and capacity to share the burden and responsibility of leadership on transnational challenges, such as climate change.

The EU and Japan have long been important economic players in the global economic order. However, they have not been able to effectively leverage their economic prowess to become important strategic players, in part because of their strong security reliance on the U.S. With an unpredictable and transactional American leadership, the EU has increasingly taken steps to boost its own security and defense capabilities in order to achieve strategic autonomy. Similarly, Japan has become more assertive and diplomatically proactive in pursuing closer strategic relations with other powers in the Indo-Pacific region.

Acting in tandem, the EU and Japan could perhaps fill the leadership void in specific areas and build on their own respective identities as multilateral players, support the emerging multipolar order by insisting on rules-based multilateralism.

Continuing along the Multilateral Path

The recent about-turn by the U.S. after President Trump’s meeting with Jean-Claude Juncker, president of the European Commission, to start negotiations with the EU, is a clear indication that the EU, with its economic power, is no pushover. It is time for the EU to stand up firmly for what it embodies in its treaty.

The EU will have to continue its proactive approach to seek out like-minded partners, such as Japan, and work on the convergence of interests. Coming at a time when it is increasing its presence in Asia, the EU should again look into reviving the EU-ASEAN FTA negotiations. The EU-ASEAN FTA will have important significance as the EU-Japan EPA comes in the wake of increasing trade tensions between the U.S. and China. Both regional blocs—the EU and ASEAN—need to step up their engagement in support of the open, rules-based multilateral trading order, something that will be of benefit to all stakeholders involved.

Jonathan Munemo Professor of Economics at Salisbury University
URL: https://www.brinknews.com/the-eu-japan-economic-partnership-agreement-filling-the-leadership-void/
Get ahead in a rapidly changing world. Sign up for our daily newsletter. Subscribe
​​