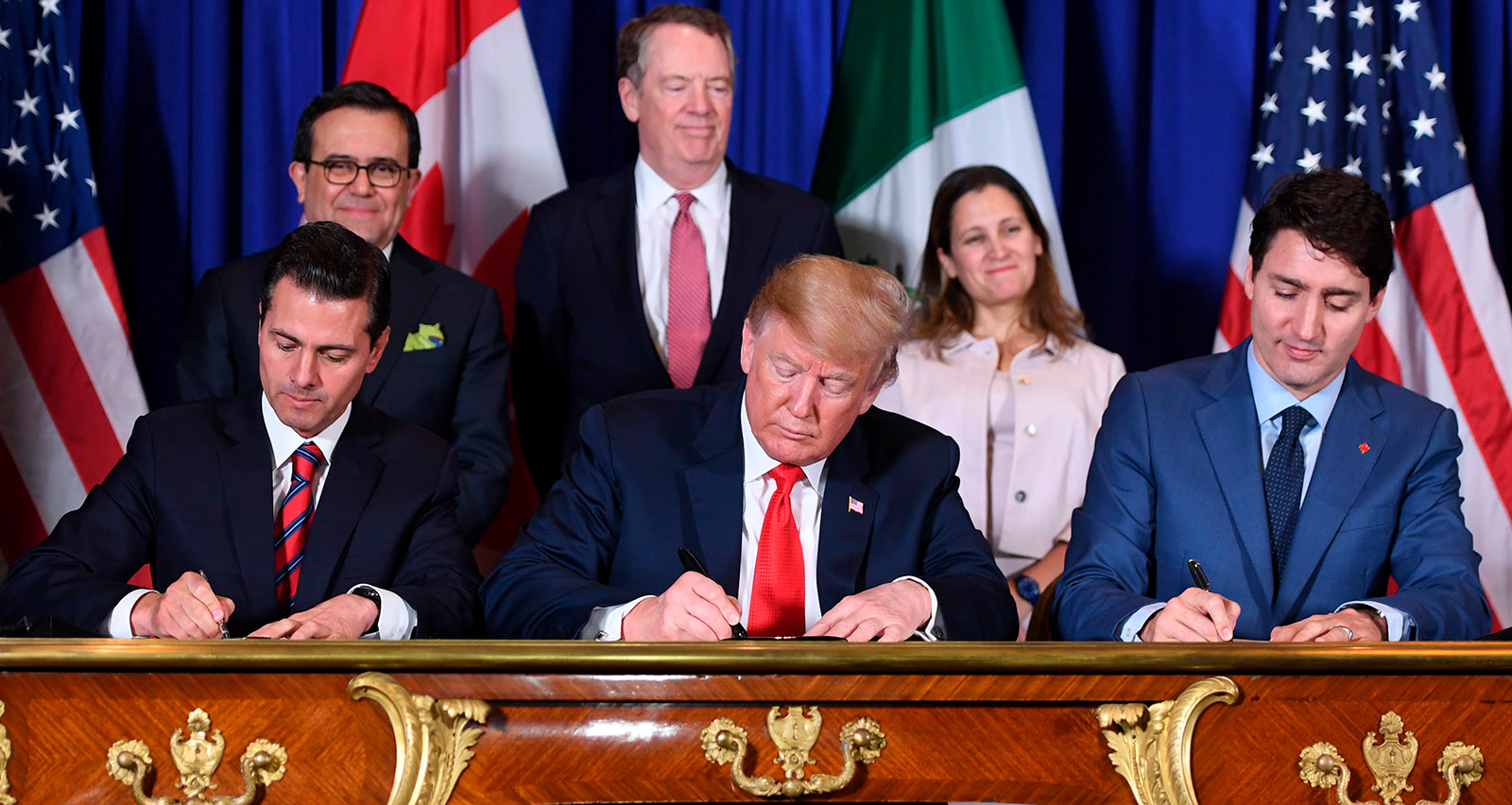 This is the first of two pieces looking at the USMCA. The second one, on the view from Mexico, was published on January 29th.

One year ago, I contributed an article to BRINK that began with the comment, “From a Canadian business perspective, restoring a more certain trade environment in North America is at the top of any wish list for 2019.” By that measure, 2019 was very successful.

This development marked a restoration of sanity to the management of North American trade relations and was greeted with relief in Canada and by most Americans.

A year ago, the larger drama surrounding the fate of the new NAFTA, the USMCA, remained uncertain. The general view seemed to be that the Democrats who had taken control of the House of Representatives in the midterm elections were hostile to the USMCA and would not be willing to give President Trump a “victory” as he prepared to seek a second term.

However, as spring turned to summer, it was becoming clear that many Democrats and, importantly, Speaker Nancy Pelosi were interested in trying to find a way to a “yes” on the agreement. Just as important, the administration was prepared to work with the Democrats to address specific concerns they had raised about the USMCA.

At the same time, Robert Lighthizer, the American trade representative, was engaged in parallel discussions with his counterparts in Canada and Mexico. The result of all these efforts was the signing on December 10 by the three countries of an amending protocol that revised (what we call in Canada) the Canada-United States-Mexico Agreement (CUSMA) and put it on a clear path toward ratification.

What followed was even more astonishing.

On December 19, the day after voting to impeach President Donald Trump, the House of Representatives voted overwhelmingly by 385-41 to approve the USMCA and enact the implementing bill. Notably, 193 Democrats and 192 Republicans voted in favor.

Such massive and bipartisan support for a trade agreement has not been seen since the passage of implementing legislation for the Tokyo Round of GATT negotiations in 1979. The Senate predictably also approved the USMCA by 89 to 10 on January 16. The strength of political support in the United States for the new NAFTA augurs well for the future of trade cooperation in North America.

The Mexican Senate easily ratified the amending protocol in December. This now leaves Canada as the only country not to have ratified the agreement.

Although the situation for the USMCA looks a lot better than it did 12 months ago, there are still some dark clouds on the horizon.

When Will Canada Ratify?

2019 was a federal election year in Canada.

So when Parliament was dissolved for the October 21 election, all pending legislation died on the order paper. In the election, Prime Minister Justin Trudeau’s Liberals were rebuked by the voters and lost their majority, but Prime Minister Trudeau, as leader of the party with the most seats, retained his job as prime minister.

On January 21, Prime Minister Trudeau told the press that the government would submit draft legislation to provide for the implementation of the USMCA immediately after Parliament resumes sitting on January 27.

Support for the Democrats’ Changes

Some criticism of how the government managed the negotiations can be expected from the opposition parties, but no party has a serious interest in trying to scuttle the deal. Expect ratification in Canada to occur well before Easter.

Importantly, the changes to the USMCA resulting from the administration’s negotiations with House Democrats are viewed very favorably in Canada.

Canadian negotiators led by Deputy Prime Minister Chrystia Freeland had sought to strengthen the dispute settlement system in a similar fashion to what the Democrats achieved. Most Canadians are supportive of the strengthened provisions on labor and the environment. And finally there was virtually no support in Canada for lengthening the duration of the protection for biologic drugs; indeed the government had opposed this proposal by the U.S. administration.

So the situation looks a lot better than it did 12 months ago. However, there are still some dark clouds on the horizon.

WTO Reform Moving Up the Agenda

The Appellate Body at the WTO has ceased to function because the United States has not allowed new judges to be appointed over concerns about how the body has operated. The WTO remains important even for Canada-U.S. trade and the uncertainty resulting from this development is damaging.

The Phase I agreement between the U.S. and China has helped calm markets, but the purchase commitments made by China will unfortunately erode export prospects to China for Canadian producers of the products covered by the deal. Furthermore, on the face of it, these commitments would seem to be a violation of the most favored nation provision of GATT Article I.

On a more positive note, the U.S. administration is taking a larger role in promoting WTO reform. A good example is the January 14 Joint Statement of the Trilateral Meeting of the Trade Ministers of Japan, the United States and the European Union calling for strengthening WTO rules on industrial subsidies.

Finally, it is hard to overestimate the importance of the strong bipartisan support given by Congress to the USMCA. This shows that the U.S. can negotiate and implement major modern trade agreements. This development should send a positive signal to other countries contemplating whether or not to engage in negotiations with the United States.

Chris Miller Associate Professor at the Fletcher School at Tufts University
URL: https://www.brinknews.com/unexpected-success-story-canada-and-usmca/
Get ahead in a rapidly changing world. Sign up for our daily newsletter. Subscribe
​​