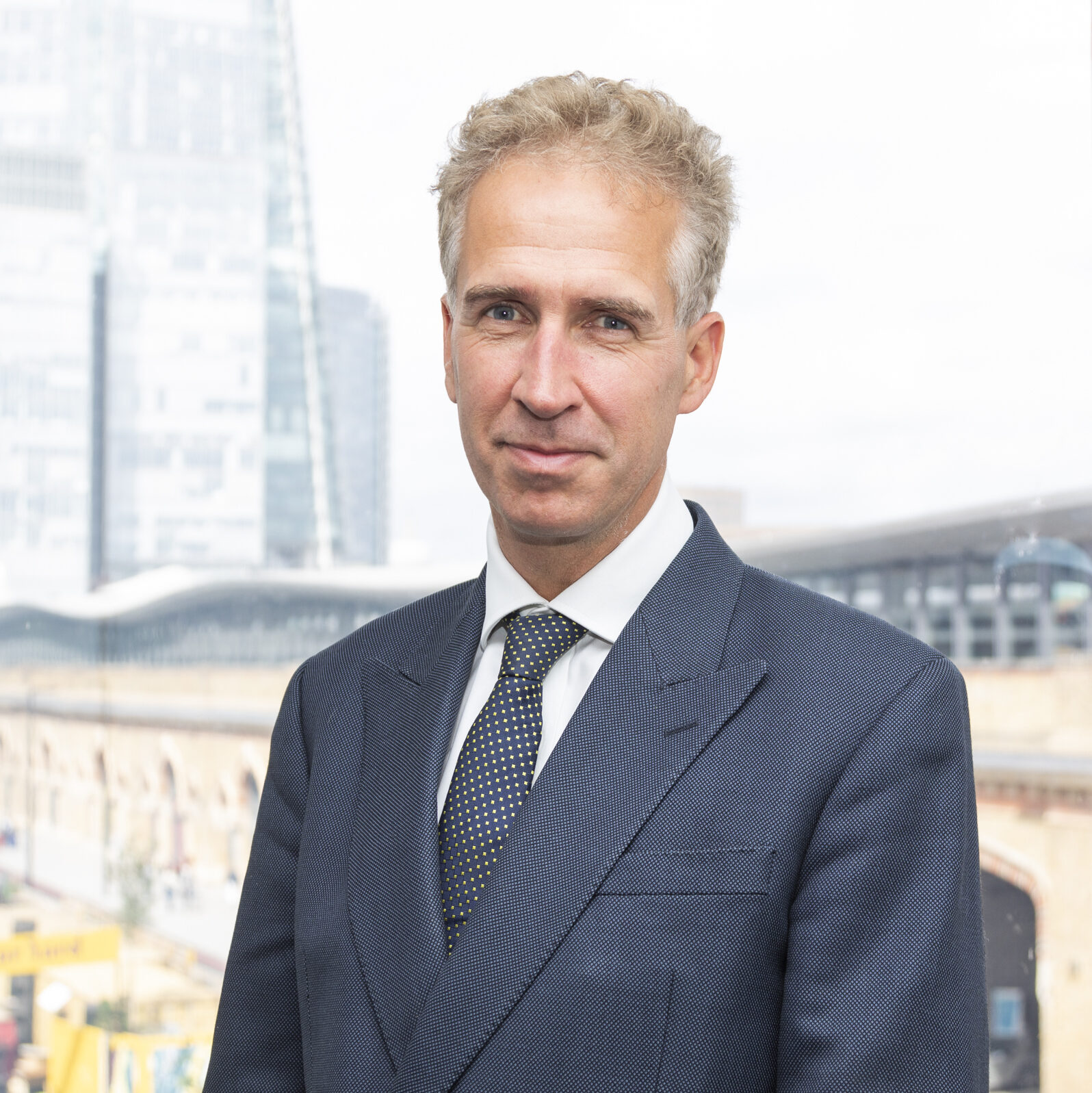 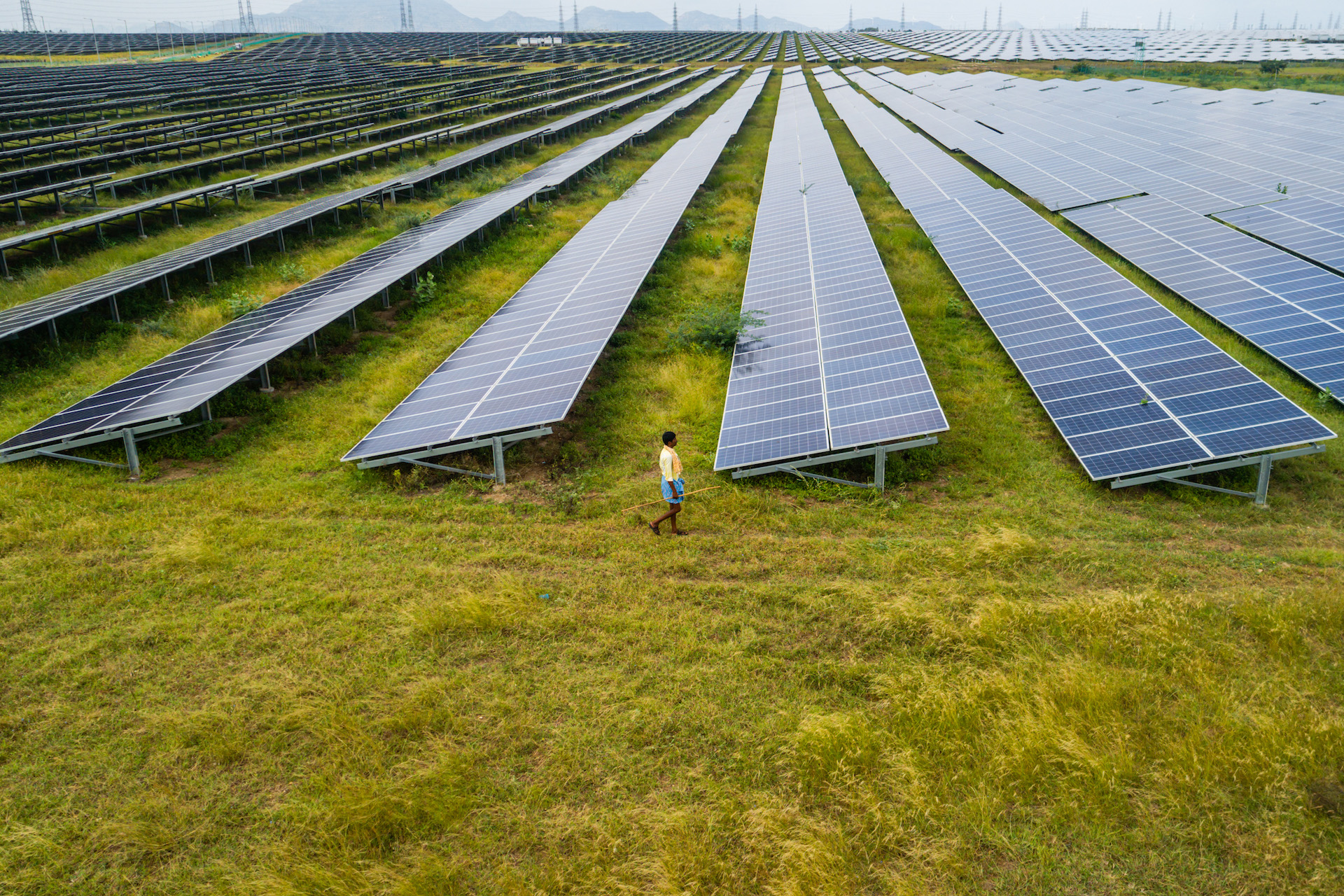 An aerial view shows a shepherd walking past photovoltaic cell solar panels in the Pavagada Solar Park on October 11, 2021 in Karnataka, India. For the first time, investment in clean energy, like solar power, is outstripping fossil fuels.

Investment in clean energy technology is now outpacing fossil fuels. According to the IEA, clean energy will be 60% of total investment in energy in 2022. New research from the Rocky Mountain Institute shows that the world reached peak fossil fuel demand in 2019 and is bouncing along a plateau of demand.

RMI predicts that fossil fuel demand will enter a steep decline by the end of the decade, as greater efficiencies and rapid deployment boost clean energies. BRINK spoke to Kingsmill Bond, lead author of the RMI report.

BOND: Global demand for energy grows at about 1% a year or around 6 ExaJoules (EJ). But global supply growth for solar and wind is growing by around 20% a year, also about 6 EJ this year using the BP methodology, and 17 EJ by the end of the decade. And as this new technology is deployed, there is no longer any room for fossil fuel demand to grow.

Coal demand peaked in 2013, and since then, we’ve been bouncing along a plateau for a decade. As solar and wind move up their growth curves, they will push coal off the edge and into decline. A similar thing is now happening in oil. You’ve got a peak in 2019; it fell in 2020, bounced back in 2021, but not to the 2019 levels. It bounded back again in 2022 but again, not to the 2019 levels; so it’s bouncing around on a plateau. As the electric vehicle market grows, oil demand will start declining.

The S Curve of Exponential Growth

BRINK: Your analysis shows a very steep drop in fossil fuel demand, almost a cliff, from about 2027 onwards. What precipitates that?

BOND: What lies at the heart of this energy transition is exponential growth in the new technologies, known as an S curve. To give you a flavor, think about electric vehicles. Three or four years ago, electric vehicles had a market share of around 1% and were still niche. Now, they have passed their tipping point, and the market share is 15% globally and 30% in China, the world’s largest market. There’s a very clear path on an S-curve where you go essentially from about 5% to 80% within a decade, so we think that electric vehicle sales are shifting towards a market share of 80% in leading markets by the end of this decade.

It’s a similar story with solar panels. A decade ago, we were struggling to deploy 30 gigawatts a year of solar panels. In 2022, Bloomberg NEF raised its central forecast for solar panel deployment globally to 270 GW of new capacity. To put that number in context, it is three times as much as the total deployed capacity in the U.S. at the end of 2021 and will provide over half of the expected increase in electricity demand globally this year. It’s clear that in a decade’s time we’ll be deploying between 500 and 1,000 gigawatts of solar, which will be easily enough to supply all the growth in electricity demand.

BRINK: If we look ahead to 2030, what will be the clean energy mix, according to your calculations?

BOND: By 2030, fossil fuel demand will clearly be in decline across the system, after 200 years of growth. The implication of current growth rates is that solar and wind would increase from 12% of electricity generation to 35%, fossil fuels would decline from 60% to 40%, and nuclear, hydro, and biomass would stay basically flat at about a quarter of the system.

No one is suggesting that fossil fuel demand will vanish overnight. It’s always the same in technology transitions: You don’t go from having tens of millions of horses and thousands of miles of canals to no canals or no horses overnight. You simply find a better solution, stop growing the old system, and then it enters into decline.

Capital allocation is shifting from fossil fuels to renewables. If you take the IEA data from their World Energy Investment publication, fossil fuel capital expenditure has dropped from $1,200 billion in 2015 to about $950 billion this year, at the same time as renewable capital expenditure has grown from $1,000 billion dollars to $1,400 billion. Essentially, what’s going on here is replacement. Capital is reallocating from an industry that is about to enter decline to an industry that has got spectacular amounts of growth. This is quite normal. 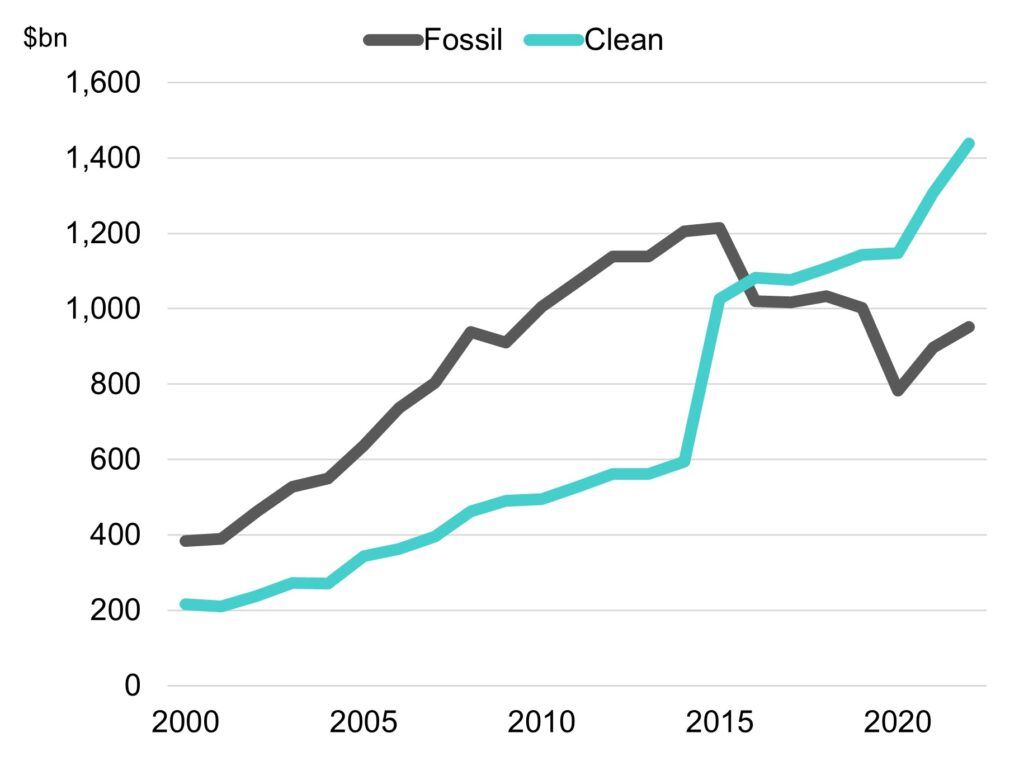 BRINK: There’s been a lot of talk about how the recent crises have propped up demand in fossil fuels. Could that upset this trajectory?

BOND: [President Vladimir] Putin removed a piece of Russian energy supply from the global system, so we had a supply shock and prices went up. But if somebody doubles the price of something, you’re going to use less of it. That’s precisely what’s been happening. Of course, Europe is using more coal, but it is using less gas; on a global basis, people are using less fossil fuels because the price is so much higher and they’re using as much renewables as they possibly can. Our solar deployment is 50% higher than last year. Asia has decided not to embrace gas. And battery and hydrogen deployment has gone through the roof.

Because fossil fuels are so inefficient compared to renewables, the very fact that these renewable technologies are being deployed at scale will increase the efficiency gains of the system. So fossil fuel demand will be squeezed between rising efficiency and growing renewables. That’s what creates the real risk for the system right now.

We have calculated that the deployment of new technologies like electric vehicles, heat pumps and solar and wind would increase efficiency by 1%, which doesn’t sound very much, but if the efficiency gains in previous decades have been 2% a year with 3% global growth, and now efficiency gains are going to increase to 3% at the same time as global growth is actually decelerating towards 2%, you get a very clear picture of a system that is much more vulnerable to the growth of renewables.

Kingsmill has worked as a financial market analyst and strategist for over 25 years, including for Deutsche Bank, Sberbank and Citibank in London, Hong Kong and Moscow. He joined RMI in 2022 to write analysis on the impact of the energy transition on financial markets, and has written many pieces on that theme.

Mark Campanale Founder and Executive Chair of The Carbon Tracker Initiative
URL: https://www.brinknews.com/we-have-reached-peak-fossil-fuels/
Get ahead in a rapidly changing world. Sign up for our daily newsletter. Subscribe
​​