What Role Can Blockchain Really Play in Smart Cities? 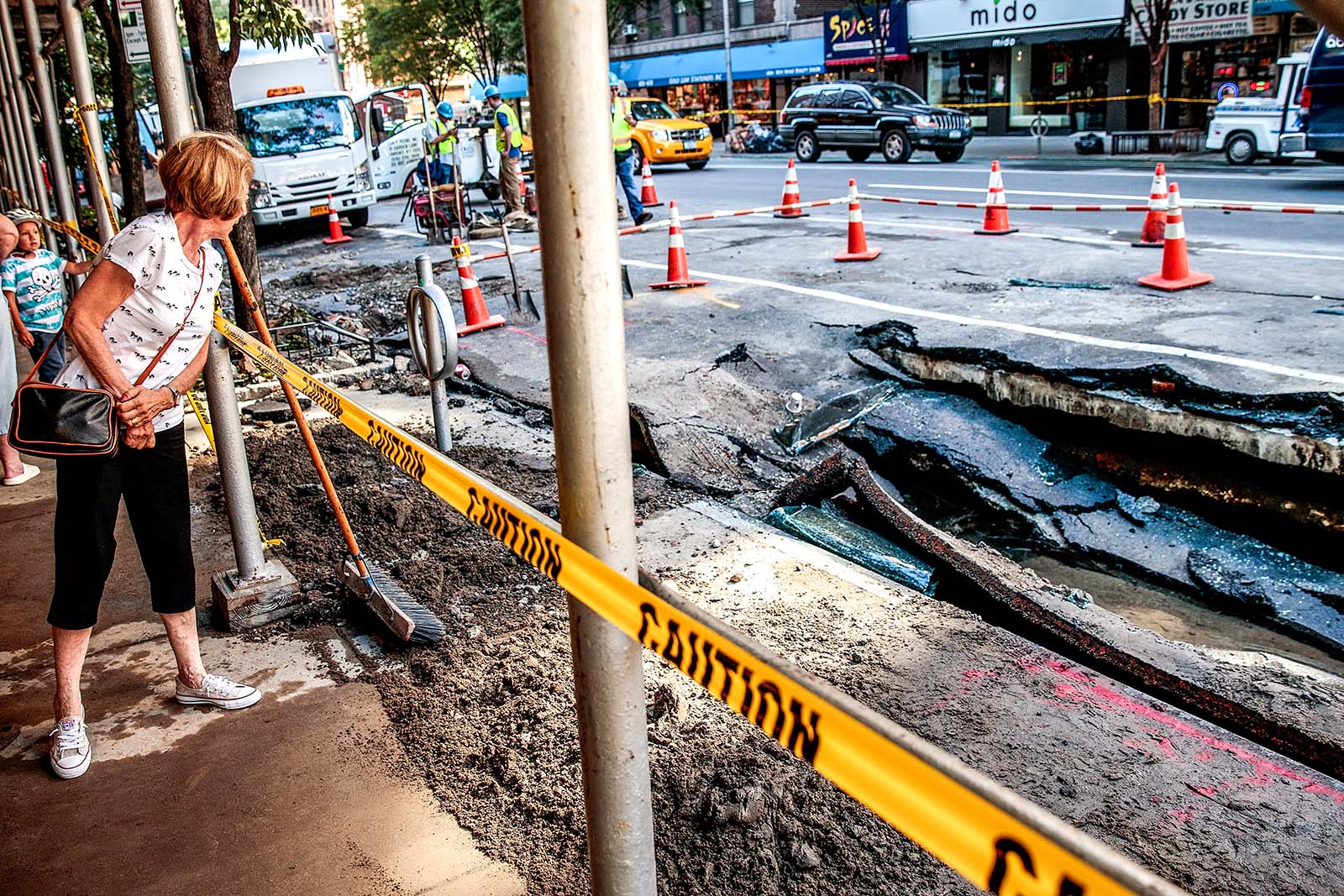 A woman peers into a sinkhole caused by a water main break on the Upper West Side section of Manhattan in New York City. Blockchain is a useful technology, but it isn't suited for all the urban problems smart city innovations aim to address.

Blockchain can do some amazing things. It pushes the frontier of how we exchange and use data. It opens up new possibilities for how we do business and how we respond to exceptions in a normal process flow.

But it doesn’t solve every problem.

If you live in a city, you’re familiar with the need to fix urban infrastructure. Wouldn’t it be great if blockchain would fill that pothole on the street? Or get the neighborhood kids to stop stealing that sign on the corner? Sure it would—but blockchain doesn’t do those things.

Blockchain is a fundamentally different way of thinking for most people. As a result, we see lots of political and industry leaders talking about how blockchain can solve a variety of vague problems. One UK position paper, for example, referred to a “chain of transactions” as a potential next step for trade after Brexit—with little further clarification.

The fact that it doesn’t solve every problem is something that hasn’t yet filtered down into the discourse.

In a recent survey about smart cities, this phenomenon was on display. Seventy-seven percent of respondents agreed that blockchain could solve urban problems that they faced. However, when pressed, only 15 percent of urban residents could think of exactly what this meant.

The reason for this misconception is that blockchain is lumped in as a technology solution without a clear understanding of exactly what it does.

Most urban problems are physical. They are the downsides of density. Your trash doesn’t get picked up on time. Traffic congestion is getting worse, and public transportation isn’t picking up the slack—making you late for work (again). Physical infrastructure is falling apart. The global trend of urbanization is an important step forward for growth and development—innovation happens when smart people group together—but this comes with a lot of problems.

The broad solution to physical problems is intelligent urban planning. This is why the smart cities movement has focused on faster and more accurate performance measures and better communication and information.

The technologies that facilitate better urban planning are those that allow better and faster data collection and analysis. Technologies like the Internet of Things and machine learning that uses big data have done the most to optimize urban processes.

In this capacity, blockchain can play an important—but supporting—role. Ultimately, smart cities are much more about analytics and IoT, not blockchain. This explains why so few of the respondents in the smart cities survey could identify a clear use case for the technology.

Blockchain solves problems about trust and verification of information. It makes data safer and more trustworthy. This is particularly valuable when there are multiple parties involved in a transaction. Let’s cover four things that blockchain does really well.

First, it helps multiple participants reach consensus over a set of shared facts. Say you run a small business. Since you’re a crafty entrepreneur, you want to start exporting your goods to Japan. To fulfill export documentation, you’ll need to prove exactly where all your inputs came from. Blockchain would serve you well in this capacity.

A second thing blockchain does well is create digitally scarce assets. This includes tokenizing assets, which represent goods that themselves are not on the blockchain. Today, the only currency that is on blockchain is cryptocurrency. But companies are working hard to tokenize fiat, for example.

Before we target blockchain as the magic solution to all of our problems, we need to sit back and think about what it does well.

Third, an environment in which blockchain is useful is where participants control the evolution of shared facts. In such a system, both the buyer and the seller would need to agree to any changes in the price of goods—for example, in the event of a new tariff.

A fourth benefit of blockchain is that it can slot in when there is a need for an industry-workflow tool without a single actor that coordinates or knows everything. This is the case where a centralized source of data is creating vulnerability or where there is market-sensitive data being shared.

Blockchain Can Still Play a Role in Cities

So now that we’re all on the same page, let’s revisit the smart cities survey. What were those 15 percent of respondents—who had a very clear idea of how cities could use blockchain—referring to?

A lot of the benefits of blockchain for smart cities are related to public goods administration. Cities are growing faster than ever. This means that more residents are putting pressure on processes that were not built with that volume of demand in mind.

First, blockchain can make government records more accessible, reliable and transparent. Historically, the centralization of government records has been a problem: Corruption, misadministration, destruction of records and opacity of bureaucratic systems are just a few of the difficulties surrounding access to public records.

This is worse in developing countries or following wars and natural disasters when it can be difficult to re-establish who owned what. This is precisely what happened in Haiti in 2010, when many public records were destroyed by an earthquake. Today, many of these records are still missing.

In 2018 in the UK, HM Land Registry began experimenting with blockchain as part of an initiative to facilitate property buying and selling. This is one area where blockchain has produced some important value added for problems faced by urban residents. Title registries are subject to fraud, and they’re often not updated, among many other problems. Blockchain enables an immutable history of sales and transfers, introducing transparency into a situation where multiple actors are often working with different versions of the truth.

Blockchain can also improve cybersecurity of critical public goods. Electricity is central to today’s population, touching on everything from the banal—charging your phone to use Instagram—to the essential—lighting your home. While the government has a number of security measures in place, there is still a single central grid in most countries. And any central grid can be hacked.

Is it a big deal if someone hacks the electricity grid? While the U.S. is big enough that the whole country is unlikely to go dark, those of us on the East Coast remember the 2003 blackout, which left 50 million people in the U.S. and Canada without power for about 24 hours. Traffic lights went out, passengers had to be evacuated from subway tunnels in New York and airports closed. The implications of electricity disruptions have multiplied exponentially in 2018.

Eighty percent of the world’s GDP is created in cities. However, the rapid urbanization of the global population has put pressure on our perilously creaky infrastructure. Smart cities’ initiatives aim to produce and collect more data to make urban growth more efficient and, ultimately, less costly for urban citizens.

Blockchain has an important—but specific—role to play in this transformation. Before we target blockchain as the magic solution to all of our problems, we need to sit back and think about what it does well. Is your problem data-related? Is it an issue where centralization is not efficient or desired? Then decentralization and blockchain might be the solution.

Alan Jenn Assistant Professional Researcher at The Institute of Transportation Studies at the University of California, Davis
URL: https://www.brinknews.com/what-role-can-blockchain-really-play-in-smart-cities/
Get ahead in a rapidly changing world. Sign up for our daily newsletter. Subscribe
​​