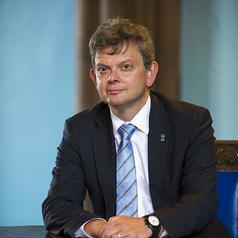 Anton Muscatelli
Principal and Vice Chancellor at University of Glasgow 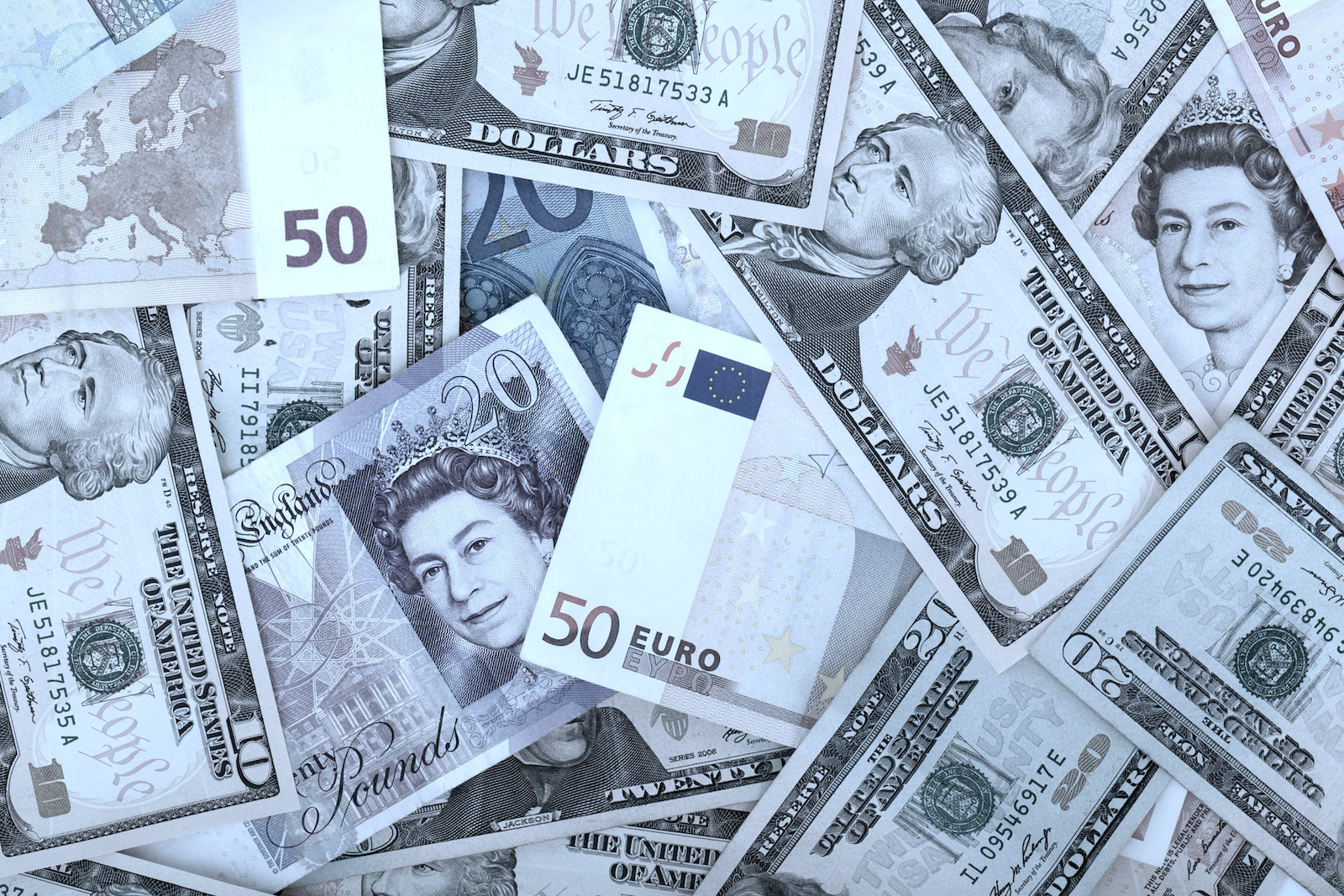 Central bankers’ public statements all hint at the difficult decisions ahead.

Central banks are being tested by the recent resurgence in inflation, with the U.S. recently reporting an annual rate of inflation of 6.8%, the highest in nearly 40 years. The question they are all asking is whether this inflation is temporary (“transitory”) or persistent.

If it is only transitory, it would be counterproductive to deal with it aggressively. If central banks tighten monetary policy unnecessarily by sharply raising short-term interest rates or quickly unwinding those government asset purchases (known as quantitative easing or QE) which supported many economies during the COVID-19 economic shock, it will needlessly push back the recovery.

Central bankers’ public statements all hint at the difficult decisions ahead. The chair of the U.S. Federal Reserve, Jay Powell, signalled recently that the strong U.S. economy combined with rising inflation meant the Fed would “taper” its QE asset purchases more quickly (they are currently due to end by June 2022).

The Bank of England is due to end its asset purchases this month, and Huw Pill, the chief economist, has indicated that “the conditions now existed for him to vote for higher interest rates”. The European Central Bank’s chief, Christine Lagarde, has struck a more dovish note, saying it is unlikely the ECB will increase interest rates in 2022, despite inflation well above its 2% target, as it considers it transitory. It is unclear whether the ECB will extend its QE programme beyond March 2022.

So how significant is the current inflationary shock, and what are its causes?

As you can see below, the recent surge in prices is not large compared with those of the 1970s and early 1980s, which were caused by large increases in oil prices. 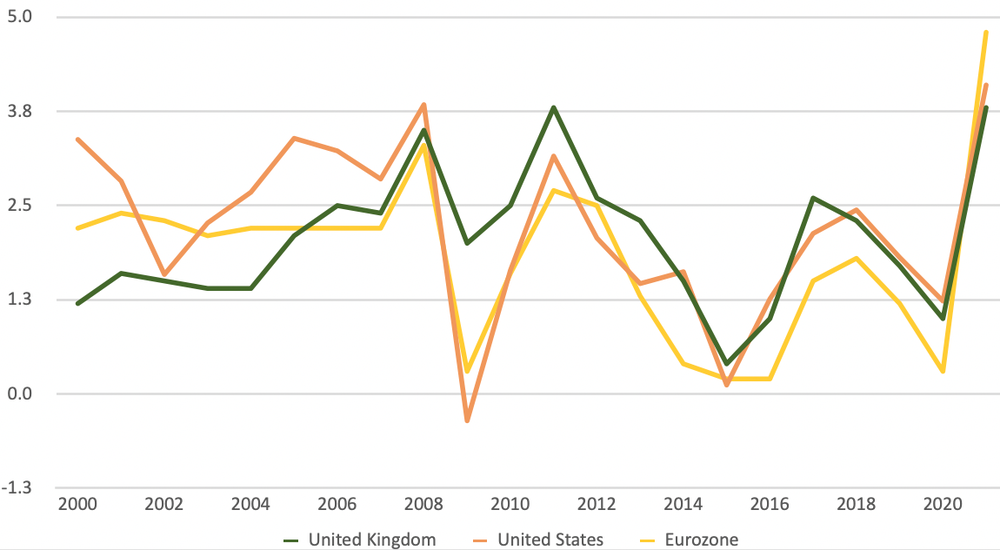 However, if one compares the current inflation increase to the 2000s, it is one of the biggest shocks since the Bank of England became independent and the ECB was set up. 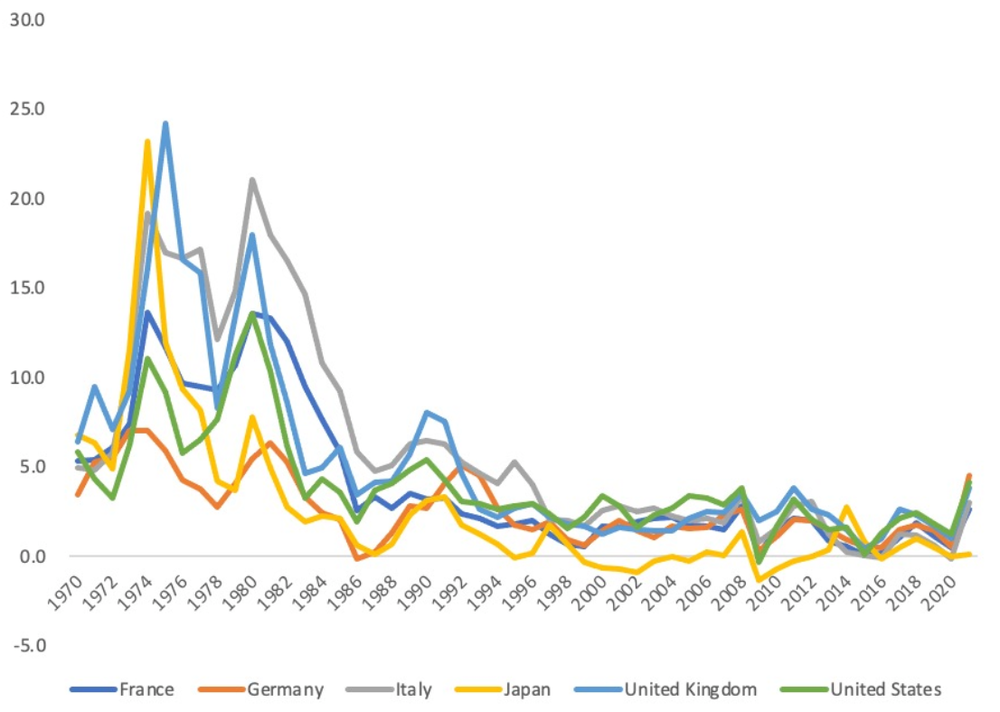 Today’s inflation is due primarily to the disruption the pandemic has caused to key global supply chains. In sectors like electronic goods and vehicle production, bottlenecks and shortages of key inputs such as semiconductors emerged as consumer demand recovered more rapidly after the first pandemic wave than suppliers could keep up with. Similarly, shortages of shipping containers and freight capacity have increased costs.

The rapid economic recovery in 2021 has also put pressure on energy prices, especially spot gas prices in Europe. Meanwhile, there have been labour shortages to contend with: the U.K. and U.S. are among those nations that seem to be seeing labour-force participation falling due to people retiring. The U.K. and certain northern European economies have also not been seeing enough of the short-term migrants that they need for sectors like hospitality and goods transportation. When there are fewer workers available, employers have to pay higher wages to fill posts.

How should monetary policy respond? For central banks, the key question relates to inflation expectations. If consumers and businesses believe that inflation will continue at similarly high levels, as they did in the 1970s, they will try to incorporate it into wage claims and in setting future prices. Inflation will then become more persistent.

What is the evidence for these “second-round effects” on wages and price-setting? There is some evidence from consumer surveys and bond prices that inflation expectations in the U.S., eurozone and U.K. have increased marginally in the latter half of 2021, but they still seem contained.

One difference with the 1970s and 1980s is that labour markets are more flexible, in the sense that trade unions have less wage-bargaining power in the private sector, and there is greater international competition as a result of globalisation. Rather than setting off a wage-price spiral, rising prices might therefore be absorbed by wages falling in real terms (meaning they would increase below the rate of inflation).

That depends on the COVID-19 supply disruptions being temporary, as ultimately, with tightening labour markets across most countries, employers would eventually have to pay wages that keep pace with inflation. Unfortunately, the omicron variant is a sign that as COVID-19 becomes endemic, economic recovery might be punctuated by occasional disruptions and further supply shocks, potentially increasing the pressure on employers to pay higher wages.

The key to gauging whether inflation remains transitory will be future labour market and expectations data. Suppose that by early to mid-2022, inflation appears to be dissipating, central banks might only need to increase rates gradually to anchor expectations.

But if the data points to inflation remaining stubbornly higher than central banks’ inflation targets (say 4%-5%) for a longer time-horizon, it would be evidence that a wage-price spiral has set in. Central banks would then have no alternative but to substantially increase short-term interest rates and reduce QE — potentially reducing economic activity until wage and price increases moderated. As we know from the 1970s and early 1980s, this can cause painful recessions, leading to unemployment.

At any rate, QE needs to be ended carefully. It has created extra demand for government bonds and increased the supply of money available to invest in other assets such as stocks, so tapering has the potential to cause volatility in these markets. This is likely to be compounded by investors selling stocks in the belief that tighter monetary conditions will mean less economic growth.

Nontraditional Business Risks May Call for a Unique Safety Net

The QE purchases have also greatly enlarged central banks’ balance sheets. For example, the Fed balance sheet has increased from around US$4 trillion (£3 trillion) to US$8.7 trillion since the start of the pandemic. Besides tapering, this is going to have to be unwound. It can either be done very slowly as QE-debt matures, or — if central banks feel they need to tighten monetary policy more aggressively – by selling these bonds on to the market. This might mean selling at a loss, in which case governments would have to rebuild central banks’ balance sheets. By making central banks dependent on governments in this way, it might compromise their independence.

There is also a more immediate challenge to central-bank independence, which was granted several decades ago to stop monetary policy being subject to political interference and to reassure the markets that inflation would be kept under control. Yet just because a central bank sets rates independently of government, it may not be immune from external pressures during a major economic crisis. Central bankers could succumb to political and media pressure either to move too fast on tackling inflation, or too slowly to preserve the economic recovery.

Some central banks like the Bank of England look set to hold fire on interest rates until early 2022 — despite the comments from Huw Pill — given the uncertainties surrounding the omicron variant. The ECB is similarly holding steady. So all eyes will be on the Fed on Wednesday 15 to see if it is going to taper QE faster than previously announced. For the time being, I would argue that it would be better to wait. The next few weeks will give us more data on both inflation expectations, but also on how COVID-19 might continue to affect our economies.

A version of this piece was originally published by The Conversation.

Principal and Vice Chancellor at University of Glasgow

Professor Sir Anton Muscatelli is a principal and vice chancellor at the Univeristy of Glasgow. Muscatelli has been a consultant to the World Bank and the European Commission and was a member of the Panel of Economic Advisers of the Secretary of State for Scotland from 1998 to 2000. Since 2007, he has been an adviser to the House of Commons Treasury Select Committee on monetary policy, and in 2008 he was appointed to chair an independent expert group for the Calman Commission on Devolution, set up by the Scottish Parliament and led by the Chancellor of the University of Glasgow, Sir Kenneth Calman.

Jonathan Munemo Professor of Economics at Salisbury University
URL: https://www.brinknews.com/why-inflation-is-the-biggest-test-yet-for-central-bank-independence/
Get ahead in a rapidly changing world. Sign up for our daily newsletter. Subscribe
​​