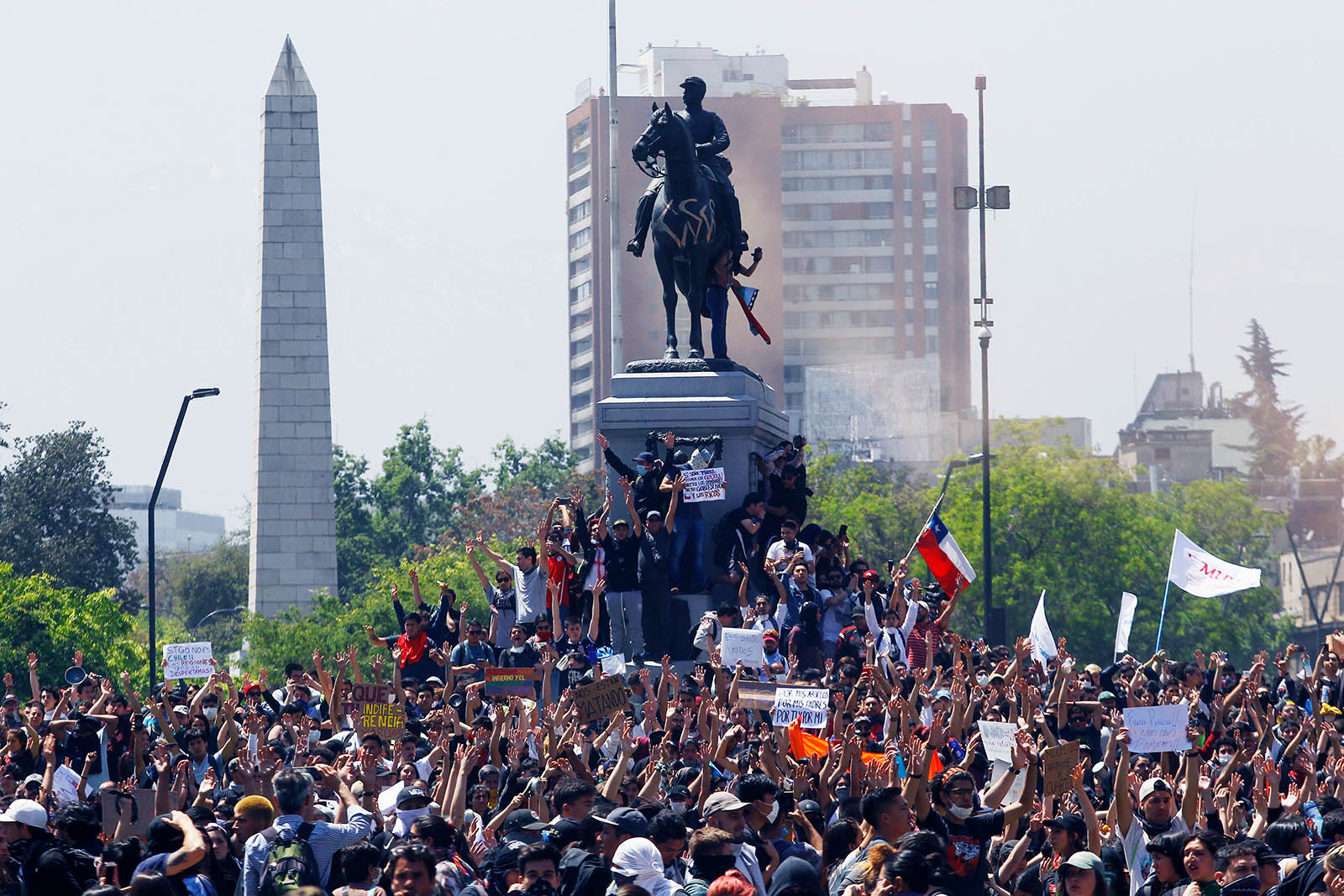 Anti-government protests have roiled the globe in 2019, from Hong Kong and Indonesia to Lebanon and Iraq. But the mobilizations in South America took many by surprise. Over the past three months, virtually every Andean nation — Venezuela, Ecuador, Peru, Bolivia, Chile and Colombia — has erupted into mass protest.

The protests have some common threads. But their different sparks also make for unique explanations and outcomes. After teasing out some common themes in the protests, here’s what’s useful to know about what is happening and why (arranged by countries from south to north).

The clear common denominator in all protests stems from economic woes. According to the International Monetary Fund, Latin America and the Caribbean economies will grow an anemic 0.2% this year — the worst performance of any major region in the world. Compare that to the growth of emerging markets, slated to rise globally by 3.9% in 2019.

The region’s slowdown is clashing with rising expectations. The economic reforms undertaken by many countries in the early part of this century coincided with a commodities boom that lifted 10 million Latin Americans every year into the middle class from 2002 to 2012. As a result, the percentage of Latin Americans living in poverty shrank from 45% to 25% in that same period.

But rising middle-class status brings middle-class expectations — people don’t only want more schools or wider access to health care, but better schools and shorter waits for doctors. The subsequent slowdown left citizens feeling like the rug was pulled out from under them — just as circumstances were improving.

There is also a lack of confidence in the political system. Corruption scandals and inequality rates are harder than ever for Latin Americans to swallow. According to the Latin American Public Opinion Project at Vanderbilt University, only 57.7% of Latin Americans support democracy — the lowest level since the survey was started 15 years ago. More than 80% of citizens across the region believe at least half of their politicians are corrupt.

The protests in Chile, long considered the region’s economic and democratic model, were the most surprising.

The Chilean economy will expand by close to 3% in 2019, even though the economy’s dependence on copper exports has proved painful amid trade wars and China’s slowing growth. Inflation is low, unemployment has been steady, and poverty rates have declined to less than 10% over the last three decades.

But while the economy performed brilliantly over the past decades, growth slowed in the past five years, and the cost of living skyrocketed. Socioeconomic immobility remains pervasive. Chileans demand better pensions, improved public services, quality education and wider access to health care. Protestors have called for redistribution and better public services.

Facing a popular movement, the administration of Chile’s President Sebastián Piñera successfully negotiated with lawmakers a national accord to hold a referendum in April 2020 on whether to have a new constitution and what kind of body should write it. This is now seen as the key to the structural change that many young Chileans seek, and a vote for a new constitution seems unstoppable. Most Chileans support the idea; and all parties, except for some on the far left and the far right, have signed the accord.

Most likely, Chile will maintain a competitive market economy with stronger elements of European-style welfare. So, if Chile’s new constitution can succeed both in defending capitalism and leveling the social playing field, the protests go into the history books as having contributed to advancing, not deterring, President Piñera’s promise to turn Chile into Latin America’s “first developed country” by 2025.

The past months’ protests are less about ideology than about the honest demands by citizens for better and more transparent governments.

The issue in Bolivia was a highly contested national election result.

Even after losing a referendum in 2016 to allow for a fourth presidential term, former President Evo Morales steamrolled ahead — packing the Constitutional Court that subsequently declared his right to be reelected a “human right.” Fast forward to the October 21 presidential elections this year: With about 80% of the ballots counted, Bolivia’s electoral tribunal mysteriously stopped counting ballots as it became evident that former President Morales would face a second round of elections. Days later, the counting resumed, miraculously showing former President Morales’ outright win. Organization of American States observers condemned the irregularities and demanded a new vote amid protests that led former President Morales to flee to Mexico.

After a terrible start by the interim government of right-wing Senator minority leader Jeanine Áñez, Bolivia now seems back on track for a return to democratic rule.

On November 24, Interim President Áñez signed into law a bill annulling the results of last month’s elections and calling for a new vote within 120 days. The legislation was even supported by Movement for Socialism (MAS), former President Morales’ political party. New officials will be chosen to head a reformed electoral authority — a key step for a more transparent electoral system in Bolivia.

None of this means that MAS is going away. The party leadership seems ready to move beyond former President Morales, although there isn’t a clear successor. Nevertheless, a MAS-lite candidate who rejects unconstitutional behavior but supports former President Morales’ social policies could have a winning message. After all, the former president left office still a relatively popular figure with a significant political base.

President Lenín Moreno seems to have dodged a political bullet in Ecuador. Following mass protests in October, an official peace deal was negotiated, and the government was successfully moved from Quito to Guayaquil.

The price of staying in power, however, was restoration of fuel subsidies. The original scrapping of subsidies was part of the deficit-cutting pledges agreed upon in return for $10 billion from the IMF. Rather than increase taxes, President Moreno decided to cut fossil fuel subsidies, which cost $1.4 billion a year — albeit without a social safety net for the poor.

President Moreno benefits from having organized opposition groups with whom to negotiate, including the indigenous group CONAIE. But his government now faces the task of passing tax reforms through the National Assembly. If they fail or prove unpopular, Ecuador could face longer-term challenges to economic growth or a return to populism in 2021.

Colombia at a Crossroads

Colombia is the latest Latin American nation to join the wave of anti-government mobilizations, with a 250,000-person march and a nationwide strike on November 22nd.

While Colombia has been a model of growth over the past decades, the protests were hardly surprising: President Iván Duque Márquez’s administration has been plagued by problems during his 16 months in office, resulting in low approval ratings and unsuccessful legislative efforts.

Demonstrators in Colombia are rallying against an array of issues: from plans to raise the pension age and cut minimum wage for young people (which President Duque Márquez denies supporting), anger over corruption scandals, to a spike in the murder of human rights activists. The parts of the peace deal with the FARC (The Revolutionary Armed Forces of Colombia — People’s Army) that President Duque Márquez wanted to overturn have proved constitutionally untouchable — while the accord’s social investments have been stalled.

As a reaction to the protests, President Duque Márquez followed the playbook of French President Emmanuel Macron’s response to France’s “yellow jacket” protests of last winter: He pledged to begin a complicated and multifaceted national dialogue. Not an easy task — his political party was trounced in the October 2019 local elections. With two and a half years before presidential elections, that leaves a long stretch of time for either talk or more strife.

Democracy isn’t in danger in Latin America — yet. At the end of the day, it looks like the only president to not finish the term as a result of the protests will be in Bolivia. The past months’ protests, while sometimes exploited by extremists, are less about ideology than about the honest demands by citizens for better and more transparent governments that address pocketbook issues.

Such goals will require a new and deep reform agenda across the Americas. Pensions, health care, education, security and infrastructure will all be in play. Unless some progress is made on these demands, the legitimacy of democratic governments will become increasingly fragile in a region where citizens are already questioning the ability of democracy to improve their lives.

Alain Frachon Senior columnist for Le Monde
URL: https://www.brinknews.com/why-is-latin-america-aflame-with-protests/
Get ahead in a rapidly changing world. Sign up for our daily newsletter. Subscribe
​​