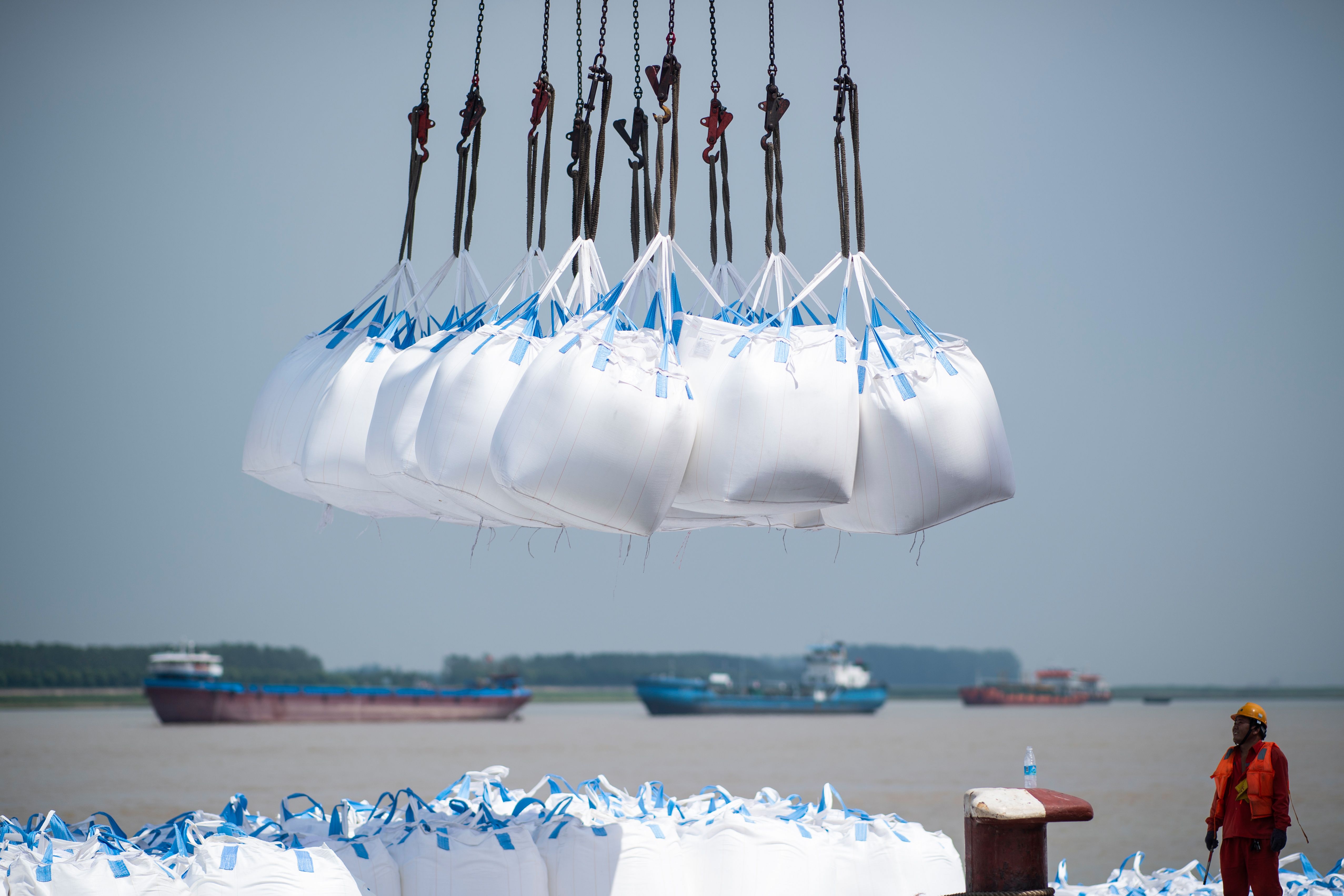 Workers unload bags of chemicals at a port in China's eastern Jiangsu province. The trade agreement reached between the U.S. and China will cause a slowdown in economic activity in China.

The response of the global financial markets to the trade agreement reached between the United States and China has been very positive, probably excessively so given the relatively limited size of the agreement reached.

The positive thing about the agreement is that it allows a truce — at least partially — in the strategic competition between China and the United States. This truce comes at a key moment for both President Donald Trump and President Xi Jinping for different reasons. China cutting tariffs in half on U.S. goods will serve President Trump as he aims to show that he has managed to take China on before the U.S. presidential election.

China Gains Sentiment but Little Else

The China dream (also named the Nation’s Rejuvenation) needs 5.7% GDP growth in 2020, which could probably have been reached with the better sentiment following the agreement reached on the Phase 1 deal. But as President Trump reminded the world in Davos, the U.S. has been the main beneficiary of the deal, as existing tariffs on Chinese imports will not be dismantled, and China will need to import as much as the equivalent of $200 billion in goods from the U.S. A large trade diversion will be created to satisfy the import amount and is the main reason China may be considered a loser of the Phase 1 deal.

Additionally, for China, any positive sentiment that the deal generated around the Chinese economy has now vanished as a consequence of the coronavirus outbreak.

Corona Has Dispelled the Good Feelings

Such a massive increase in imports from the U.S. can only be guaranteed by substituting Chinese imports from other parts of the world. The trade diversion generated from such a substitution will not only hurt Chinese consumers, but also other key exports to China. For the $50 billion of agricultural and energy products, the losers are generally the emerging economies.

For the $80 billion in manufacturing products, the main losers are Germany and, to a lesser extent, South Korea and Japan for autoparts, chemicals, aerospace and semiconductors. In other words, the trade agreement between the U.S. and China should not be read so positively in Europe, especially in Germany, or in South Korea and Japan.

The outbreak of the coronavirus can only make things worse as China will have an even harder time fulfilling the commitments to the U.S. in terms of imports due to meager growth. This means that cuts on EU imports are even more likely than before.

The other reason Phase 1 is creating so many losers is that it is not comprehensive, i.e., it does not really push for reform in China. Other than the push for stronger protection of intellectual property rights and technology transfer, the deal does not call for the elimination of subsidies to production or, more generally, the reform of China’s productive sector.

Without external pressure, it seems unlikely that China will embark on such bold measures.

This also means that China’s potential growth will continue to slow down. This is bad news for China and for any countries that depend heavily on the provision of goods and services to the Chinese market. Germany, Korea and Japan are cases in point.

The negative impact of the coronavirus on the Chinese economy will make it harder for China to fulfill its commitments with the U.S. It would not be surprising if the $200 billion in imports do not take place in the light of sagging demand for imports.

Furthermore, this could cause the renminbi to end up much weaker than before Phase 1 was concluded, notwithstanding recent warnings from the U.S. administration against “cheap currencies.” And major exporters to China will lose from the trade diversion generated by the forced imports from the U.S.

Chris Miller Associate Professor at the Fletcher School at Tufts University
URL: https://www.brinknews.com/why-the-us-trade-agreement-will-dampen-economic-activity-in-china/
Get ahead in a rapidly changing world. Sign up for our daily newsletter. Subscribe
​​