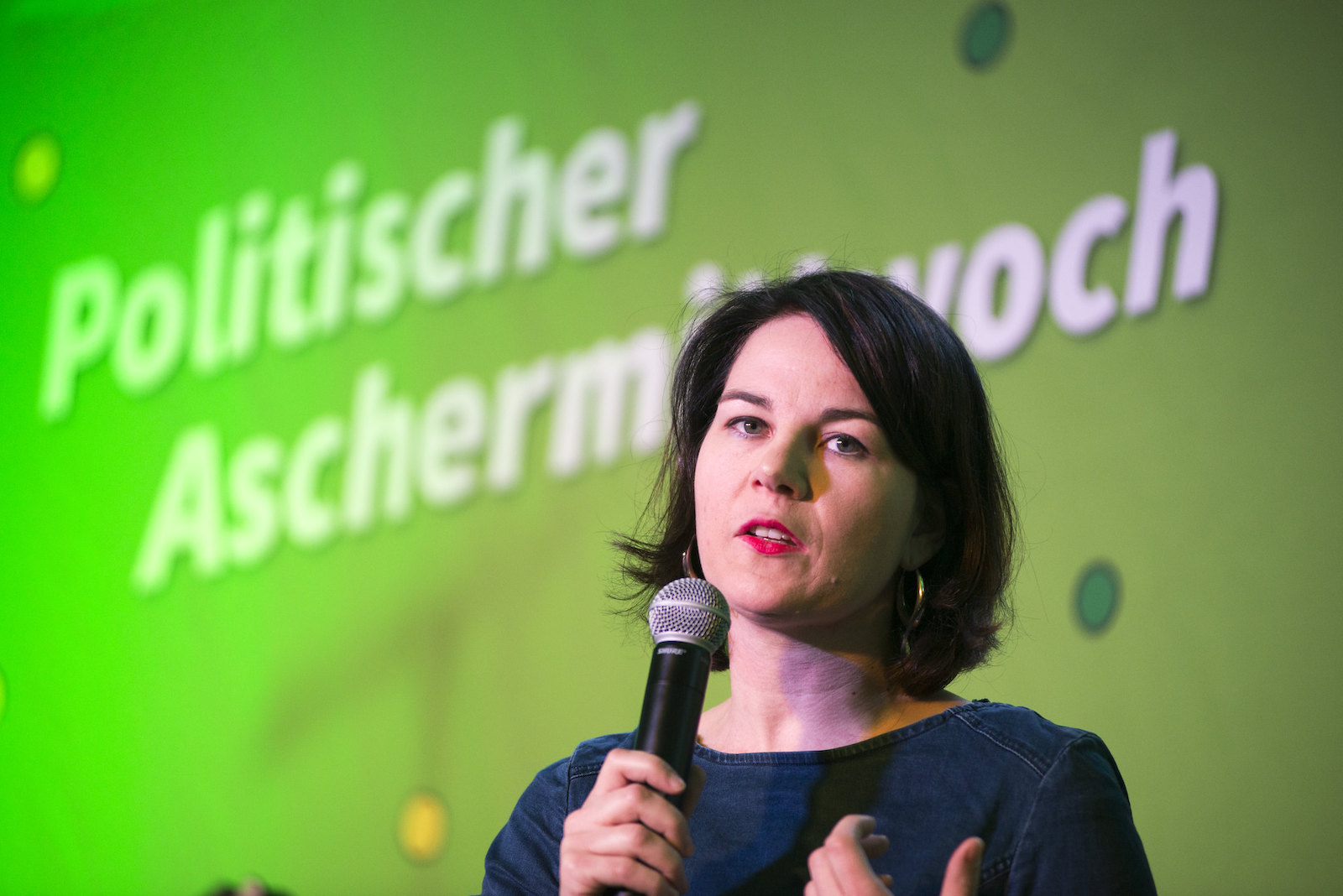 Annalena Baerbock speaks at an Ash Wednesday event in 2018. Baerbock has continued to be a critic of the controversial Nord Stream 2 gas pipeline, even after settling in her new office at the foreign ministry.

The Ukraine crisis represents the first real test for Germany’s new Foreign Minister Annalena Baerbock and the new government in Berlin. It also provides an early opportunity to gain a better understanding of the balance of power within the German cabinet and, more generally, within the new ruling coalition of Social Democrats, Greens and Free Democrats. So far, a few elements stand out.

The crisis has caught the German government by surprise, highlighting the very different approaches toward Russia pursued by more vocal critics, such as Baerbock’s Greens party, and the traditionally ambivalent Social Democrats of Chancellor Olaf Scholz. Both sides are trying to converge toward a common position, but the need to find a middle ground in the midst of a crisis makes the government look passive and timid in its approach.

The Greens have not shied away from using a more confrontational tone toward Moscow, albeit within the self-imposed limits of the traditional, German, postwar Russia policy. Most German politicians are still hostages of the Ostpolitik of Willy Brandt that emerged in the 1970s and further evolved with former Chancellor Helmut Kohl almost twenty years later, when Germany was finally reunified.

Germany is still thankful for the constructive role the Soviet Union played when the Berlin wall fell. As a consequence, engagement with Russia at almost any cost has been the commitment of successive German governments, from former Chancellors Kohl to Merkel, almost regardless of who holds the levers of power in Moscow.

Economic engagement should be seen not only as an opportunity for the export-driven German economy to expand into new markets, but also a political attempt to build bridges and allow Russia to become part of the democratic world, eventually. Despite the setbacks of the past 15 years, the country’s post-reunification Russia policy is still anchored in — or chained to — those constraints.

It is in part for this reason that any hope of early commitments by Germany to deliver arms to Ukraine, directly or indirectly, are met with initial resistance. Anything that could be perceived as an excuse for Russia to escalate the crisis further is bound to face a good deal of skepticism in the German government. Shaking off these accommodating reflexes toward Russia is difficult, but not impossible.

One of Chancellor Scholz’s predecessors once famously described himself as the ‘chef’ of foreign policy and his foreign minister as the ‘waiter.’ Baerbock is trying to avoid that division of labor.

Greens Not Afraid of Confrontation

Baerbock has already demonstrated that she is willing to make Russia pay a price, if necessary.

The government’s tone toward Russia is adapting to the new circumstances. Since Germany’s soft power dwarfs its hard power, Baerbock initially focused on highlighting differences with Russia on democracy and the rule of law, and she has done so without mincing words, even during a recent visit to Moscow.

Her transatlantic credentials are solid. She is committed to a stronger Europe. The Greens appear to believe that close engagement with the current Russian regime is a double-edged sword, and Germany can ill afford to play its own, bilateral diplomatic game. Hence the need for close coordination with France, European partners and the U.S.

Complicating matters further, many Greens suspect that Russia tried to influence the outcome of the recent German election and to weaken the Greens. I am not aware of any Green politician that harbors any illusions about President Vladimir Putin’s true intentions in Russia and Europe.

Importantly, Baerbock has continued to be a critic of the controversial Nord Stream 2 gas pipeline, even after settling in her new office at the foreign ministry. Nord Stream 2 would allow Russian gas to flow directly to Germany, bypassing countries such as Ukraine and Poland. The pipeline is completed, but the project still awaits final authorization from both German and EU authorities. Its future was always going to be a potential point of contention within the German ruling coalition.

It is a project launched by former Social Democratic Chancellor Gerhard Schroeder that continued to be pursued by his successor, former Chancellor Angela Merkel. They both defended the project, despite mounting criticism in Europe and across the Atlantic.

Chancellor Scholz was expected to go ahead with Nord Stream 2, not least because of the need to contain a sustained surge in gas prices while the country and Europe face the difficult and costly transition toward a more sustainable economy. However, more recently, Chancellor Scholz has opened a small door toward reconsidering the project, no doubt under the pressure of events and a more clearly positioned foreign minister. Social democrats now say that all retaliatory options are on the table in the case of Russian aggression. Nord Stream 2 is not excluded.

Baerbock has demonstrated a well-developed foreign policy compass, while it appears that Chancellor Scholz is still in search of one. We got used to German chancellors who dictated foreign policy with their own civil servant apparatus from the chancellery.

One of Chancellor Scholz’s predecessors once famously described himself as the “chef” of foreign policy and his foreign minister as the “waiter.” Baerbock is trying to avoid that division of labor. Chancellor Scholz comes to the chancellery from his previous role as finance minister and has surrounded himself with capable economic advisors from that time. He has a well-developed European Union focus, but is still looking for a wider foreign policy agenda. His cautious instinct is pushing him to use pages taken from the Merkel playbook. That may be too little, given current challenges.

It is a void that has catapulted Baerbock into a frontline role that, if fully supported by her party, could prove hard to dismantle. The bigger question is whether Germany will finally recognize the need to develop more of its hard power, at least to partially match its economic heft. This would not be to project national power, but rather to make Europe a stronger, more self-reliant and reliable transatlantic partner. Germany’s allies as well as its foes are still waiting for the answer.

Xianbin Yao Professorial Lecturer of International Studies at De LaSalle University Manila
URL: https://www.brinknews.com/are-the-greens-shaping-germanys-russia-policy/
Get ahead in a rapidly changing world. Sign up for our daily newsletter. Subscribe
​​