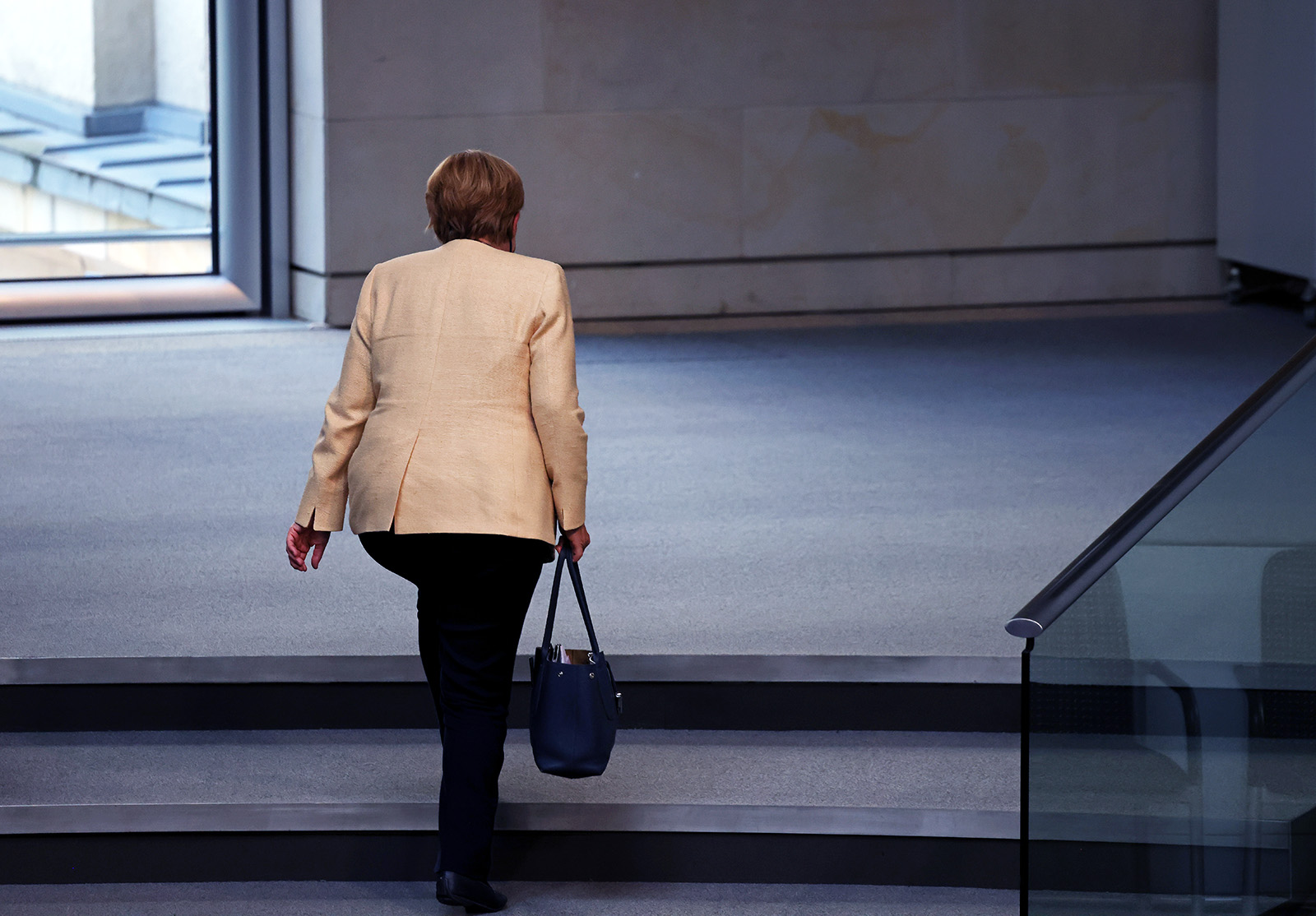 German Chancellor Angela Merkel, CDU, departs from the final session of the Bundestag before federal parliamentary elections. FDP's Christian Lindner is still bruised from wasting a golden opportunity to become part of a ruling coalition with Chancellor Merkel four years ago.

Germany’s election is finally over, but the search for Chancellor Angela Merkel’s successor at the helm of the largest European economy has only just begun. Not for the first time, building a new ruling coalition will be time consuming. Until the ink dries under a new coalition agreement, Chancellor Merkel will remain chancellor, albeit without a political majority in the new parliament.

Although it might be risky to argue that certain outcomes are more likely than others, it does appear that the number of possible scenarios has narrowed.

The Continuation of the Status Quo Option

Let’s start with what would be seen as the continuation of the status quo: the grand coalition of Christian Democrats and Social Democrats (SPD), which has ruled the country for the past eight years. This could still emerge as the only viable option in the end, but only if all attempts at forming an alternative three-way alliance fail.

In this scenario, the Christian Democrats of Chancellor Merkel would represent the junior partner. The chancellor would be a Social Democrat, Olaf Scholz, the current finance minister. Surely, Christian Democrats would insist on securing the finance ministry, and it should not surprise observers if they interpreted the role with a conservative bias, wary of big spending domestically, especially at the European level.

Could Be Trouble in Brussels

This means that talks at the European level on changing the rules contained in the Stability and Growth Pact would become very difficult. The scope for a significant overhaul of the fiscal pact would recede.

The paradox of this election is that although voters have given a mandate for continuity, very little has stayed the same.

Under such a scenario, it is also rather doubtful that “Next Generation EU,” the joint European Recovery Fund launched in response to the economic fallout of the pandemic, would become a permanent feature of the EU’s fiscal toolbox anytime soon.

A new grand coalition would, therefore, represent a different kind of continuity at the European level. In fact, as memories of the economic fallout of the pandemic fade, so would the recent German political willingness to make progress toward greater European financial burden-sharing. For EU supporters, it was worrying to see that Europe was not mentioned much during the political campaign.

The Most Likely Option

However, the most likely scenario currently under review is a coalition between the Social Democrats, the Greens, and the market-friendly Free Democrats (FPD) — without the Christian Democrats.

The success of this possibility depends on whether Greens and Free Democrats can iron out their differences, particularly on public spending. If they do, talks with Social Democrats shouldn’t be too difficult. Much depends on whether an understanding can be reached about the role of government in accelerating the transition toward a greener economy.

The Greens want to soften the German constitutional debt brake and allow for more domestic and European spending to boost the transformation of the German and European economies. They seem to have powerful allies. Shortly after the results were in, the CEO of the Volkswagen Group, Herbert Diess, publicly came out in favor of a faster and more ambitious transition toward a climate-neutral economy. Diess has bet the future of Volkswagen on non-fossil mobility. As CEO of one of the largest German corporations, his words matter.

If the powerful manufacturing industry rallies behind similar calls, the traditionally pro-business Free Democrats will have a hard time defending their minimalistic approach of lower taxes and less government. Free Democrats would have to accept that, in order to accelerate the green and digital transition, governments will have to play an active part.

What is Germany’s Succession Plan After Merkel?

Will Germans Allow Their Civil Liberties To Be Restricted Now To Prevent Future Climate Change?

The FDP could face the choice between accepting more national spending and ditching the constitutional debt brake, or formally preserving the debt brake and shifting additional green expenditures toward a boosted European common fund. To make sure that they have greater control over purse strings, both Greens and Free Democrats would claim the finance ministry.

Many European partners, in Rome, Madrid as well as in Paris and Brussels, are worried. A Free Democratic finance minister would be seen as an attempt to turn the clock back to pre-pandemic orthodox policies, based on frugality and less fiscal solidarity.

However, in such a coalition, the Free Democrats would be squeezed between SPD and Greens. They would have to adapt to circumstances. The FDP can ill afford to stay in opposition once again. Their leader Christian Lindner is still bruised from wasting a golden opportunity to become part of a ruling coalition with Chancellor Merkel four years ago. A new refusal to enter a government would not go down well with his party.

There Is a Third Possible Scenario

As unlikely as it currently seems, it’s possible that talks between the SPD, FDP and Greens fail and a coalition emerges of Christian Democrats, Greens, and Free Democrats — without the SPD.

It is no secret that conservatives of Chancellor Merkel and Greens have flirted for some time, thinking that a two-way coalition between them could be formed after the election. Both parties have taken a beating, though: the Greens by not fulfilling their full potential and the Christian Democrats by collapsing, weighed down by 16 long years in power and a lack of a real and credible alternative to Chancellor Merkel.

In this scenario, similarities between conservatives and Free Democrats far outweigh the Greens. The Greens would risk being squeezed between a CDU/CSU that is in need of rekindling its connection to voters and Free Democrats determined to push the coalition toward traditional, fiscally conservative, orthodox liberal positions.

In this scenario, the Free Democrats would be the confident party, able to claim that they are keeping conservatives straight. The other two partners, however, would be constantly preoccupied with regaining lost support among voters. Such a state of affairs would likely exacerbate politicians’ propensity to focus on short-term gains, at the expense of medium to long-term priorities.

The paradox of this election is that although voters have given a mandate for continuity, very little has stayed the same.

Chancellor Merkel skillfully managed to reconcile seemingly contradictory policies by placing herself squarely at the center of the political spectrum. It seems that despite the greater political fragmentation, most Germans would like the next chancellor to behave similarly, regardless of which coalition emerges in the next few months.

Mark Campanale Founder and Executive Chair of The Carbon Tracker Initiative
URL: https://www.brinknews.com/where-does-germany-go-from-here/
Get ahead in a rapidly changing world. Sign up for our daily newsletter. Subscribe
​​