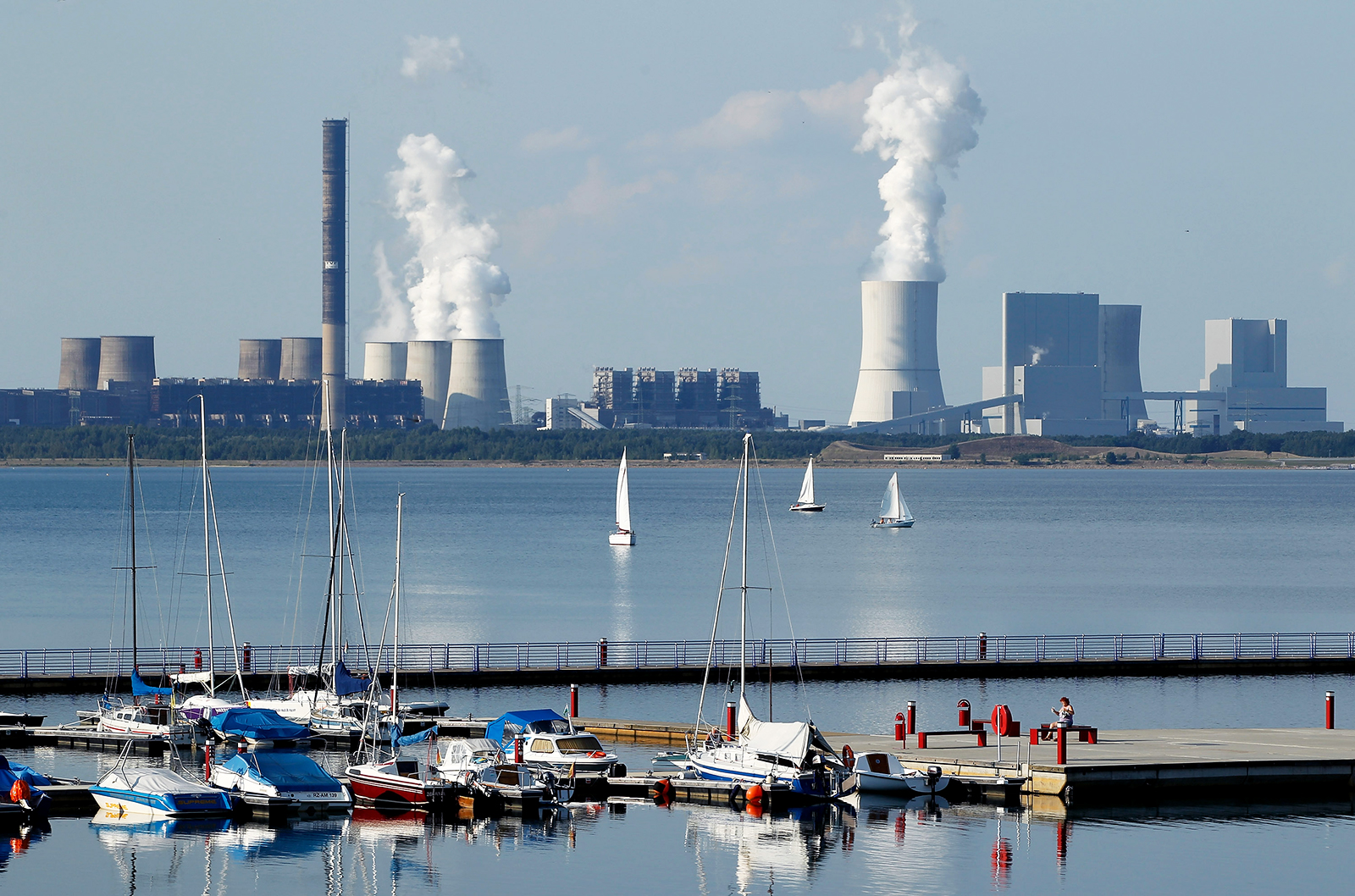 Sailboats pass in front of cooling towers at the Boxberg coal-burning power plant near Uhyst, Germany. The EU commission intends to encourage its industries to make hard choices today so they will be able to thrive in tomorrow’s green(er) global economy.

Despite ambitious commitments to reduce greenhouse gases dramatically to reach net zero global emissions by 2050, G-20 governments are still unable to turn lofty goals into a credible plan. Things are likely to come to a head in autumn, when G-20 leaders meet, and later in November when international climate talks, known as COP26, are held in Glasgow.

Until then, it is hard to imagine a breakthrough. Accelerating the transition to greener economies will not be pain-free. Extreme weather events have increased the awareness of public opinions, but still seem to fail to mobilize countries’ determination in committing to bigger sacrifices today to avoid much bigger ones tomorrow.

Plans for a Dramatic Expansion of the Carbon Market

Against this backdrop, the European Commission has launched its own plan to overhaul the European economy. Under the green deal unveiled in July, Europe would dramatically overhaul and expand its carbon market to include shipping, housing and transport.

According to EU estimates, only by doing so can climate goals for the next decade be met. The EU carbon market, known as the emission trading system (ETS), is the 27-nation bloc’s main policy tool to cut greenhouse emissions. It is centered on caps on emissions for manufacturers, utilities and airlines. So far, it only targeted big polluters.

Now, the EU commission is trying to broaden the scope, conscious that the scheme needs to go from its niche existence into the mainstream of the real economy. The ETS is based on a simple mechanism: Companies that produce less carbon get credits that they can sell, for example, to carbon-intensive industries, allowing them to abide by the limits imposed by European law.

The scheme is an incentive to go green faster, but also to make European industries leaders in low-carbon technology. By setting tough standards, the EU commission intends to encourage its industries to make hard choices today so they will be able to thrive in tomorrow’s green(er) global economy.

To ensure a level playing field and reduce the competitive disadvantage that industries will be exposed to during the costly transition, the EU commission proposed a new carbon-adjustment tax. The tax will put a carbon price on imports of a targeted number of products to ensure that emissions reductions in Europe encourage industries outside of the bloc to become greener — instead of pushing carbon intensive production outside of Europe.

As a result of recent pledges to increase climate goals by the EU, U.K., U.S., Canada, Japan, South Korea and Germany, carbon prices have already soared, from about 9 euros per metric ton in 2018 to the more recent 55 euros. Prices could stay at those levels or increase, but only if pledges are followed by concrete steps. And this is where the path forward in the EU could prove to be as tricky as it currently is at the global level.

Governments are wary of a new surge in populism and euroskepticism, this time fueled by the green plans of aloof technocrats in Brussels.

The commission’s green deal was instantly met with a barrage of criticism from national EU governments when unveiled. It is primarily the plan to expand carbon pricing to the biggest polluting sectors of the economy, such as cars and buildings, that drew the ire of capitals.

The fear: It would mainly hit the poorest in societies. Indeed, retrofitting homes in places like Rome or Paris is no small endeavor. Similarly, the plan to stop sales of diesel and petrol cars by 2035 is seen as too taxing for car owners in its present form, not least because it would also hit hybrid cars.

Governments are wary of a new surge in populism and euroskepticism, this time fueled by the green plans of aloof technocrats in Brussels. France, Spain, Italy, Hungary, Latvia, Ireland and Bulgaria are all reported to have raised concerns about the cost of such changes to ordinary citizens. To come into force, the commission’s plans need a qualified majority in the European Council (the body that represents member states) and support in the European Parliament.

On big legislative files, that process usually lasts two years. Less, if political support is overwhelming and technical obstacles can be addressed in a timely manner. More, if key member states have significant reservations.

France, in particular, is entering the final stretch of the presidency of Emmanuel Macron. President Macron can ill afford to be perceived as unconcerned by ordinary citizens’ worries, if his intention is to win a second term. President Macron is, therefore, unlikely to agree to anything that can be labeled as a sacrifice for French people by the opposition.

The discussions could become particularly intense when France takes up the rotating presidency of the EU at the end of the year. The presidency is tasked with coordinating the work of the various EU ministerial groups to facilitate reaching common positions vis-a-vis its co- legislators, the commission and the EP. It usually refrains from overtly pushing its own agenda with fellow governments.

The Planned Carbon Tax Could Help

Navigating the Transition to a Low-Carbon, Resilient Future

One way out of a prolonged impasse on the green file could be the deployment of financial support measures to cushion transition costs. This is where the scope of the planned carbon tax should play a role. There too, however, opposition to the distribution of more funds to member states could come from so-called frugal states, such as the Netherlands or Austria.

They want to reduce rather than expand the role of EU financial support. Crucially, much will depend on which way Germany goes. The Merkel government supports the ETS expansion and is likely to continue to do so, even with a new government, almost regardless of which coalition emerges from general elections in September. How much of its ambition the final EU compromise will sacrifice is difficult to predict.

Certainly, to fuel a virtuous circle, and increase support for a bigger carbon market, it would be helpful for the EU commission, if G-20 leaders managed to forge their own concrete green plan. What is needed is the spirit that allowed world leaders to find global responses to the financial crisis of 2008. Unfortunately, that spirit seems to be in short supply.

Til Schuermann Partner and Co-Head of Oliver Wyman’s Risk & Public Policy Practice
URL: https://www.brinknews.com/is-europes-carbon-market-finally-taking-off/
Get ahead in a rapidly changing world. Sign up for our daily newsletter. Subscribe
​​