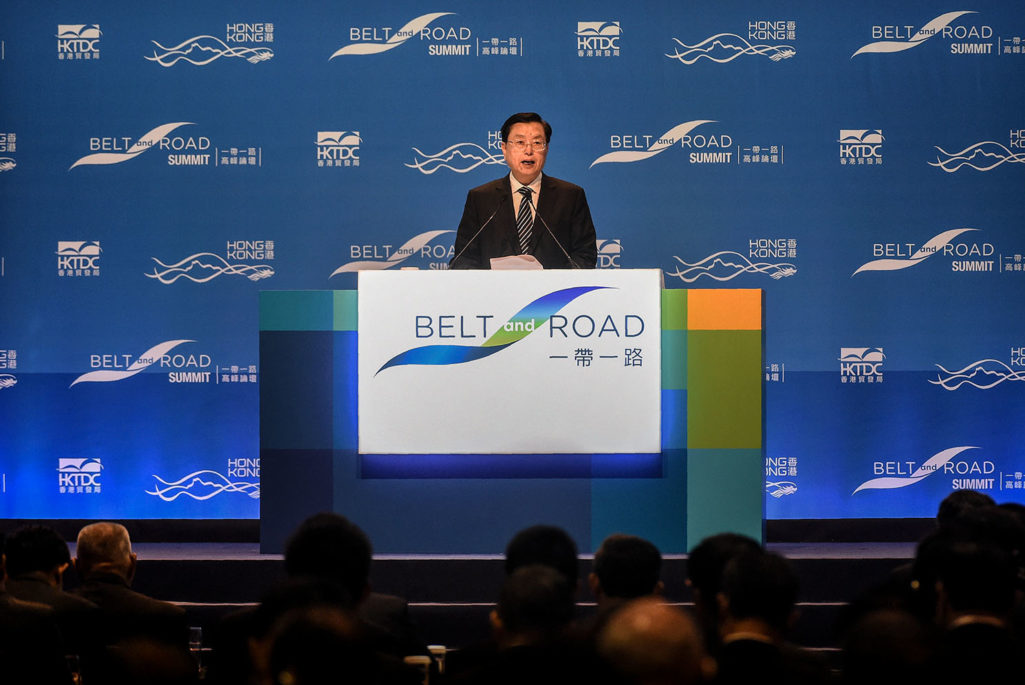 Zhang Dejiang, who chairs China's communist-controlled legislature, gives a speech at the Belt and Road Summit in Hong Kong on May 18, 2016.

Although there are many interpretations as to the ultimate objectives of China’s Belt and Road Initiative, there is one that nobody can deny: support of its exports.

Indeed, the initiative seeks to improve trade connectivity by upgrading transport infrastructure across much of Eurasia. The undertaking spans a massive geographic area covering as many as 63 countries, accounting for 60 percent of world’s population and 30 percent of global GDP.

This massive project is centered on two main routes over land and sea. On land, the focus is on transport and energy infrastructure. By sea, investments in new ports serve as pillars for promoting trade. Heavy investment will ease transportation bottlenecks affecting cross-border trade, and thereby impact Europe massively.

Among the many benefits of improved connectivity, trade is at the forefront. The idea that improved transport infrastructure fosters trade is intuitive, but which countries win or lose the most depends partially on their distance from the improved infrastructure.

In a recent Bruegel working paper, results show that 10 percent reductions in railway, air and maritime costs would increase trade by 2 percent, 5.5 percent and 1.1 percent, respectively. Can the Initiative Go Another Direction?

While the current focus is centered on infrastructure, there is another way it may evolve: dismantling trade barriers. In fact, Chinese authorities have begun to consider free trade agreements (FTAs) with Belt and Road countries. The issue is that EU countries have yet to be included. More problematic is that it is only possible for EU countries to collectively strike trade deals with China. This means that the chance for the EU to benefit from FTAs is slim.

If the Belt and Road Initiative focused on FTAs instead of infrastructure, the EU would be isolated from a sizable free trade area next to its borders. As one can imagine, this scenario is much less appealing than the previous one focused on infrastructure.

When the transportation cost is reduced, the EU is the largest winner of the Belt and Road Initiative from a regional perspective. Halving the cost of railway transportation is responsible for the large gains in rail transportation within Europe, particularly for landlocked countries.

If China establishes an FTA zone with Belt and Road countries, the EU—previously the biggest winner from the reduction in transport costs—now suffers slightly. Enhanced integration means that China and Belt and Road countries will substitute EU trade with trade among themselves. The Asia region then becomes the biggest winner, followed by non-EU European countries, which also benefit from the elimination of trade tariffs.

Under a situation with both improved transportation infrastructure and FTAs, most Asian countries become the biggest winners since they benefit from both a reduction in transport costs and the elimination of trade tariffs. Some EU countries also benefit significantly, but less so than Asian ones.

With the scenarios above, it may be in the EU’s interest to more actively take part in the Belt and Road Initiative. The EU is better positioned to take advantage of cheaper rail and maritime transport than Belt and Road countries financed by China. The EU clearly benefits from stronger trade links—and without an attached financial cost, at least for now.

On the other hand, a free trade agreement between China and Belt and Road countries—which leaves out the EU—would hurt EU trade slightly. The negative effects on the EU of a neighboring free-trade area are much smaller than the benefits of improved transport infrastructure. And a potential FTA would benefit Asian countries the most.

Therefore, the effects of the Belt and Road Initiative on Europe are considerable. Trade is only one of the many channels through which the initiative may affect Europe. Financial channels, such as FDI and portfolio flows, are also very relevant and should also be studied. It goes without saying: more research is needed.

Chris Miller Associate Professor at the Fletcher School at Tufts University
URL: https://www.brinknews.com/chinas-belt-and-road-initiative-can-europe-expect-trade-gains/
Get ahead in a rapidly changing world. Sign up for our daily newsletter. Subscribe
​​