Is the Spike in India’s Economic Growth Sustainable? 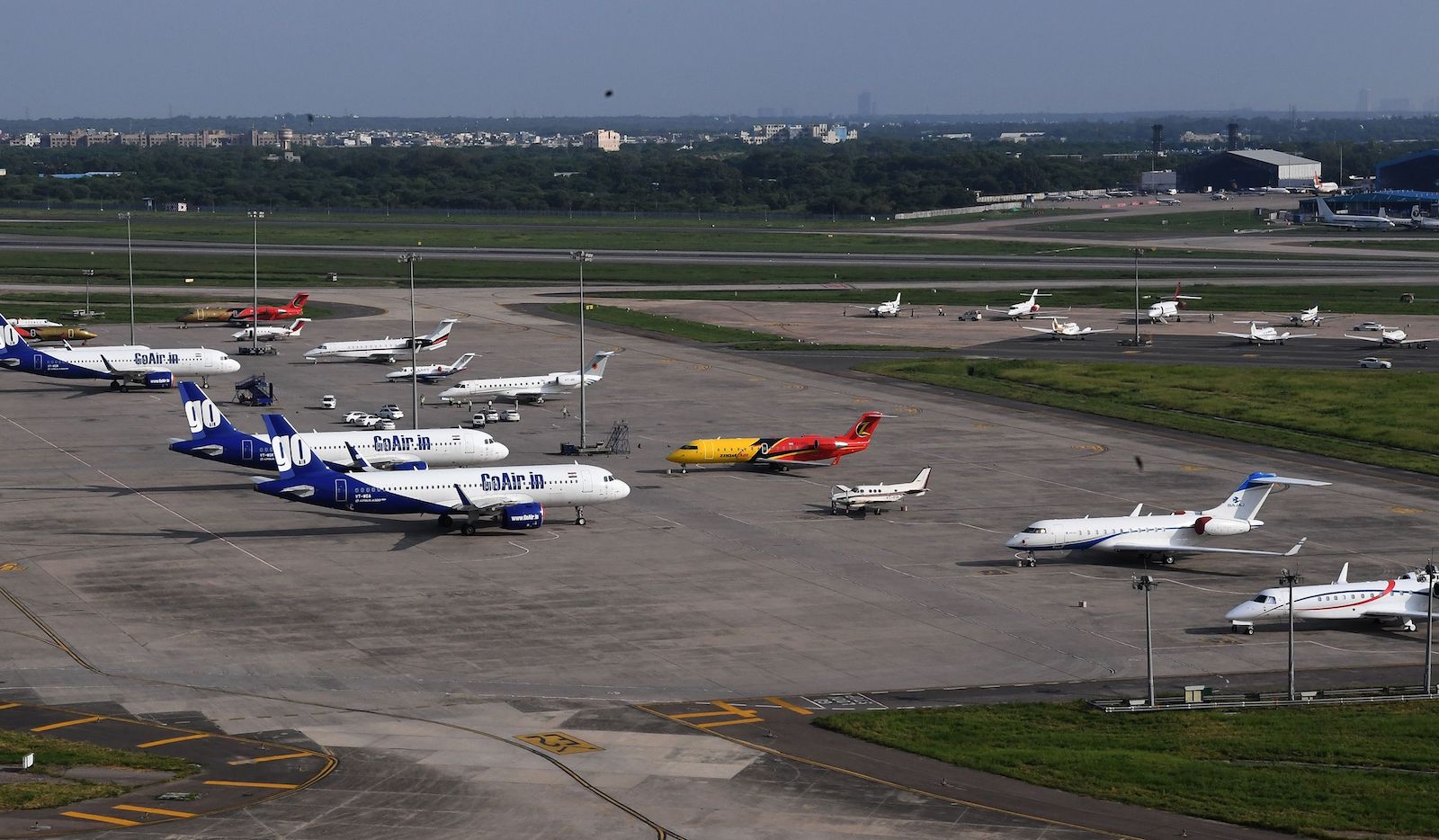 Aircrafts of different airlines at a parking bay at Indira Gandhi International Airport in New Delhi. High oil prices and a tumbling rupee are causing turbulence in India's hyper-competitive aviation market, as in other sectors of the Indian economy.

India’s gross domestic product grew by a whopping 8.2 percent in the first quarter of the current fiscal year (FY 2018-19).* According to the government, this marks the beginning of good days ahead, with manufacturing bouncing back to double-digit growth and investment levels returning to normal.

The government also suggests that demonetization and the newly introduced goods and services tax (GST) have led to improvement in tax compliance, with income tax payers almost doubling from 34.1 million in FY 2013-14 to 67.4 million in FY 2017-18. Further, the administration claims that the glitches in GST implementation have mostly been fixed and that tax collection remains steady—which will help keep fiscal deficit in check.

In other words, there is little that can derail India’s growth momentum.

Another Point of View

This exuberance, in my view, is unfounded. The double punch of a declining rupee and rising crude oil prices will increase the country’s rupee import bill, aid inflation and create complications on the fiscal front that can’t be ignored. On the flip side, however, we have strong consumption growth, and a weaker rupee should help net-exporting sectors going forward. But that will not be enough to sustain strong economic growth.

The GDP growth rate in the April-June quarter has benefitted from a low base effect as it grew by just 5.67 percent in the same quarter of the last fiscal year, primarily because of the effects of demonetization and GST-related disruptions. However, even in Q1 of FY 2016-17, GDP grew by 8.1 percent, but the full fiscal year’s GDP growth was still only 7.1 percent, and the same story may play out this time around as well.

Growth in manufacturing GDP did stand at an impressive 13.5 percent in the April-June quarter, compared to a drop of 1.8 percent in the same quarter a year earlier. However, the double-digit growth is unlikely to sustain, as major challenges ranging from poor regulations to infrastructure deficiencies remain. The average capacity use still remains around 75 percent—certainly an improvement over 71 percent previously, but still low—and will discourage companies from adding new productive capacities. Thus, even though gross fixed capital formation (a measure of investment) has gone up by around 10 percent in the first quarter of the current fiscal year, it will not be sustained, as most private-sector companies don’t have much investable surplus, earnings remain more or less flat and banks’ ability and willingness to fund large capex remains limited due to the problem of bad loans. High nonperforming assets also mean that banks will keep lending rates high to cut losses, irrespective of how the Reserve Bank of India (RBI) behaves on policy interest rates.

Separately, the average yield on corporate bonds is 9.1 percent, and most of the government’s borrowing will happen in the second half of the fiscal year. That will further push up interest rates, prune down profitability prospects and discourage new investment from the private sector.

RBI will need to defend the rupee to minimize the damage of its weakening value and rising crude oil prices.

The high rate of growth in the last quarter notwithstanding, sector-specific challenges remain. Power producers, for example, are struggling with excess capacity, while the country’s real estate companies are wondering how to restore the confidence of uninterested buyers. The health care sector, meanwhile, is suffering from price caps. The automobile sector, which had been doing well for the past several quarters, posted flat sales in August, while its input cost is going up due to the depreciation of the rupee. On the other hand, prompted by a recent Supreme Court decision, the government has proposed a new rule that requires buyers of cars and bikes to buy insurance cover for at least three and five years, respectively, at the time of their purchase. This tripling of insurance costs may discourage sales, too.

Agriculture and allied activities grew at 5.3 percent in Q1 compared to 3 percent a year back. However, most farm commodities are selling below their minimum support price while popular price-support policies are taking precedence over key reforms. This will keep the rural economy stressed. As a result of the backward and forward links between agriculture and other sectors, a stressed rural economy will drag down industries and services as well. The sales of two-wheelers and light commercial vehicles will be the most affected if things don’t improve in rural India.

The Double Whammy of Rising Fuel Prices and a Falling Rupee

Almost every segment of the economy—from logistics companies to airlines—is troubled by rising fuel prices. While the weaker rupee should ideally benefit exports, it won’t benefit too many sectors, barring a few net-exporting sectors such as apparels, pharmaceuticals and software services, because of the transformation of India’s export basket into a less price-elastic one. Moreover, with growing protectionism and the trade war between the U.S. and China, even these gains in exports will remain limited.

Additionally, a weak currency will continue to trouble corporates with imported inputs and high exposure to domestic sales. To make matters worse, roughly 60 percent of the country’s foreign exchange (forex) exposure remains unhedged. Besides, a volatile rupee will push up the cost of hedging even for those companies that hedge.

Consumption, which remains India’s major growth driver, grew at an impressive 8.6 percent in Q1, helped by an increase in allowances for 30 million government employees and pensioners along with robust growth in retail credit. Personal loans, including credit card loans, have been on the rise, and they now account for 25 percent of outstanding non-food credit, boosting demand for all kinds of consumer goods in the process.

However, maintaining robust consumption demand (8 to 9 percent) will not be as easy due to hardening inflation caused by a weaker rupee and high fuel prices. As such, the government will also be constrained fiscally in its ability to increase spending to support growth.

The combination of a weaker rupee and high crude oil prices is likely to persist in the near future due to supply disruptions in Venezuela and the looming threat of U.S. sanctions on Iran, a top energy supplier. This will increase the rupee cost of India’s oil imports, thereby increasing the subsidy burden and making it difficult to contain the fiscal deficit going forward.

Additionally, the pressures for populist spending in the run-up to crucial state and general elections will further reduce the fiscal space for productive spending in the government sector. All these realities cannot be ignored and will, in my opinion, cap India’s potential GDP growth to 7 percent or so this fiscal year.

There’s limited policy space to keep the Indian economy insulated from major developments in the global economy. India can’t really do much about crude oil prices except continue to buy from Iran while defying President Donald Trump’s warnings. With the rupee under free fall now, RBI will need to defend the rupee to minimize the damage caused by the double whammy of the weakening rupee and rising crude oil prices—even if it means going against the common advice of not interfering in the forex market.

*India’s financial year is from April to March.