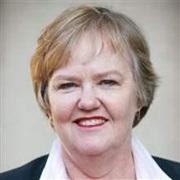 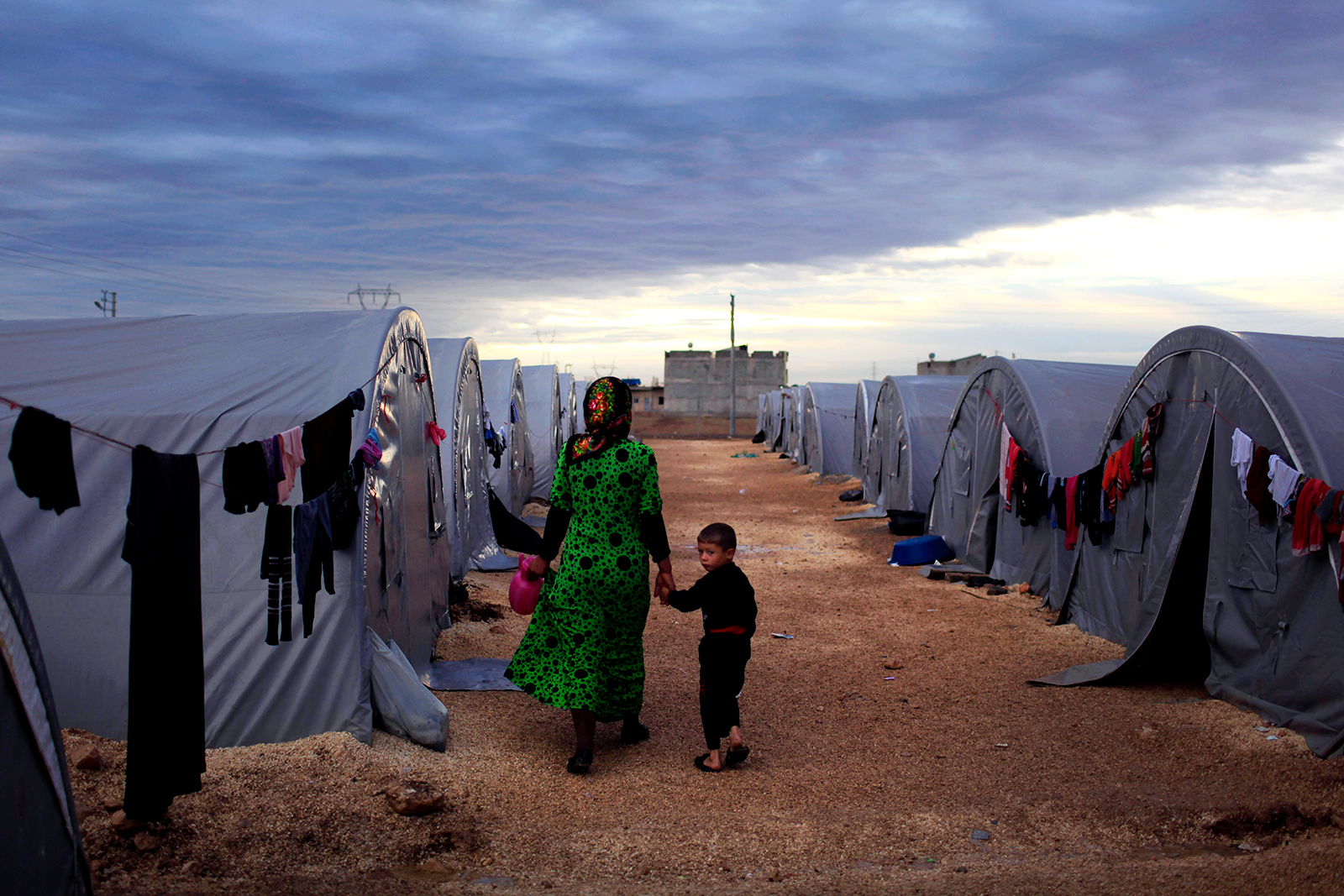 A refugee mother and son from the Syrian town of Kobani walk beside their tent in a camp in the southeastern town of Suruc on the Turkish-Syrian border in Sanliurfa, Turkey. For refugees throughout the region, the inability to work in the formal sector has been a big problem.

The scale of the Syrian refugee crisis dwarfs all others in recent history. Thirteen million people have been displaced by the Syrian war — more than the entire population of Switzerland — with millions now scattered across the Middle East and Europe. In all, about half of Syria’s pre-war population has been displaced.

Elizabeth Ferris recently published the book Consequences of Chaos: Syria’s Humanitarian Crisis and the Failure to Protect with Kemal Kirisci, which looks at the impact the crises are having on the region.

FERRIS: Turkey is currently the largest refugee hosting country in the world, with about three and a half million registered refugees in the country, plus undoubtedly, many more who aren’t registered. They’re distributed along the Turkish-Syrian border, but also in Istanbul and throughout the country.

And then there’s Jordan. Jordan has officially registered numbers of 650,000 Syrian refugees, but the Jordanian government estimates that the total number is probably twice that.

A large number of Syrians went to the EU countries in 2015 and 2016, but since the EU-Turkey deal of 2016, these numbers have fallen significantly. Under the agreement, the EU paid Turkey to prevent people from leaving Turkey to seek asylum in Greece and elsewhere in Europe. Within the EU, Greece is probably the country most affected with Syrian refugees living in the country in camps of appalling condition.

Refugees Do Not Depress Wages

BRINK: How have refugees impacted the overall economy of the Middle East, would you say?

FERRIS: The results have generally been mixed. On the one hand, there has been massive external international aid, which has helped cushion some of the economic impacts of the refugees.

All host countries fear that letting Syrian refugees enter the formal labor market will lead to higher unemployment and depressed wages for their nationals. But these fears seem to be unfounded. A soon-to-be published study on the economic impact of Syrian refugees in both Jordan and Lebanon finds that the refugees have had little effect on economic growth or unemployment.

Evidence from Turkey suggests that Syrian refugees are displacing poor Turks working in the informal sector, but then most of them are moving on into the formal sector, actually improving the economy as a result. I think there have been at least 10,000 businesses started by Syrian refugees. Many of these businesses hire Turks and are driving economic growth in parts of Turkey.

Of course, everything is complicated by COVID. More and more international funding has been diverted from supporting care and maintenance operations for long-term refugees into meeting the very real needs of responding to COVID today. The evidence suggests that Syrian refugees have been particularly hard-hit by the economic impact of measures taken to prevent the spread of COVID, experiencing higher unemployment and poverty than their counterparts in the host community.

BRINK: Has there been any softening of attitudes toward these refugees five, six years on?

FERRIS: There’s an amazing piece of research that has traced attitudes of Syrian refugees to being in Turkey, and attitudes of Turks toward the Syrian refugees over the last five or six years. And what these surveys show is that Syrian refugees feel more accepted over time: They have more friends in the community, their kids are learning Turkish and many of them are beginning to intermarry with Turks. They’re getting by economically and they feel more and more at home.

What refugees need to become fully integrated and for the economies to benefit are more job opportunities, possibility of working in factories, investments.

On the other hand, the attitudes of the Turkish population have undergone a major change. Initially, they were really welcoming and sympathetic toward the Syrian refugees. They were glad to offer hospitality to Syrians fleeing a brutal war. But with the passage of time, resentment grew, and there’s a widespread feeling that it’s time for them to go home. We’ve done our share, but it’s time for them to leave.

Haunted By the Palestinian Problem

BRINK: There’s obviously been a long history of refugees in the Middle East, including the Palestinians. Why is it so hard for these refugees to become absorbed into these countries?

FERRIS: It’s partly government policies and, in Turkey, it’s the language difference. Lebanon’s reaction to the Syrian refugees is certainly shaped by the Palestinian experience. Lebanon didn’t want to set up camps — or any permanent structures — for the Syrians because they didn’t want to create expectations that this would be anything more than a temporary stay for the refugees.

When you talk to Lebanese officials, some of them are very blunt in saying, “We were very generous to the Palestinian refugees back in 1948, and they’re still here. We do not want this to happen with the Syrians. Let them stay temporarily if there’s enough international support, but they’ve got to go home.”

The situation in Lebanon is also politically very fragile between different religious sects — between the Sunni, Shi’a and Maronite Christians. For decades, there has been a fragile arrangement on power-sharing between the three groups. And when you get a million, mostly Sunni Muslims, coming in, the political balance changes and there is a lot of fear of even further instability.

Inability to Work Is a Big Challenge

For refugees throughout the region, the inability to work in the formal sector has been a big problem. There are many Syrian dentists, engineers and accountants who are unable to work in Lebanon or Turkey because of government restrictions, so we see the widespread loss of human capital.

There are also different expectations between migrants and refugees, partly due to the international humanitarian system where refugees generally receive aid from a variety of sources, and economic migrants generally don’t and are expected to subsist on their own and not make demands on U.N. agencies for aid or government social service agencies.

In some countries, refugees are also stigmatized. There’s a feeling that, “Well, these people are coming from violent situations, maybe they’re going to bring violence into our communities.” In fact, a huge majority of Syrian refugees are fleeing violence and radical groups and don’t want to have anything to do with them once they cross an international border

The Private Sector Can Do Much to Help

BRINK: Is there anything that the private sector can do around this?

Crises in Lebanon Are Sparking a Societal Uprising

FERRIS: Absolutely. Everyone in the field is recognizing that this is not just a humanitarian issue, it’s a development issue. And what refugees need to become fully integrated and for the economies to benefit are more job opportunities, possibility of working in factories, investments.

In Jordan, there was a compact between the EU and Jordan to provide special trade incentives for companies to invest in refugee-employing businesses in Jordan. This didn’t work out terribly well, but I think that there’s still hope for that kind of model to really aid integration, to provide jobs for refugees who are usually desperate to find jobs.

Humanitarians have traditionally viewed the private sector as a source of donations to support their work — through corporate social responsibility programs. But more and more, they’re recognizing that businesses need to do what they do best, i.e., set up businesses, factories and enterprises that employ people and make a profit. And in the process, these businesses give sorely needed job opportunities for refugees.

Elizabeth Ferris is a research professor with the Institute for the Study of International Migration at Georgetown University. In 2016, she also served as a senior advisor to the UN General Assembly’s Summit for Refugees and Migrants in New York. Prior to joining Georgetown, she was a senior fellow and co-director of the Brookings-LSE Project on Internal Displacement and spent 20 years working in the field of humanitarian assistance, most recently in Geneva, Switzerland at the World Council of Churches.

Andrew Yeo Senior Fellow and SK-Korea Foundation Chair in Korea Studies at Brookings Institution’s Center for East Asia Policy Studies
URL: https://www.brinknews.com/millions-of-syrian-refugees-are-changing-the-middle-east-economy/
Get ahead in a rapidly changing world. Sign up for our daily newsletter. Subscribe
​​