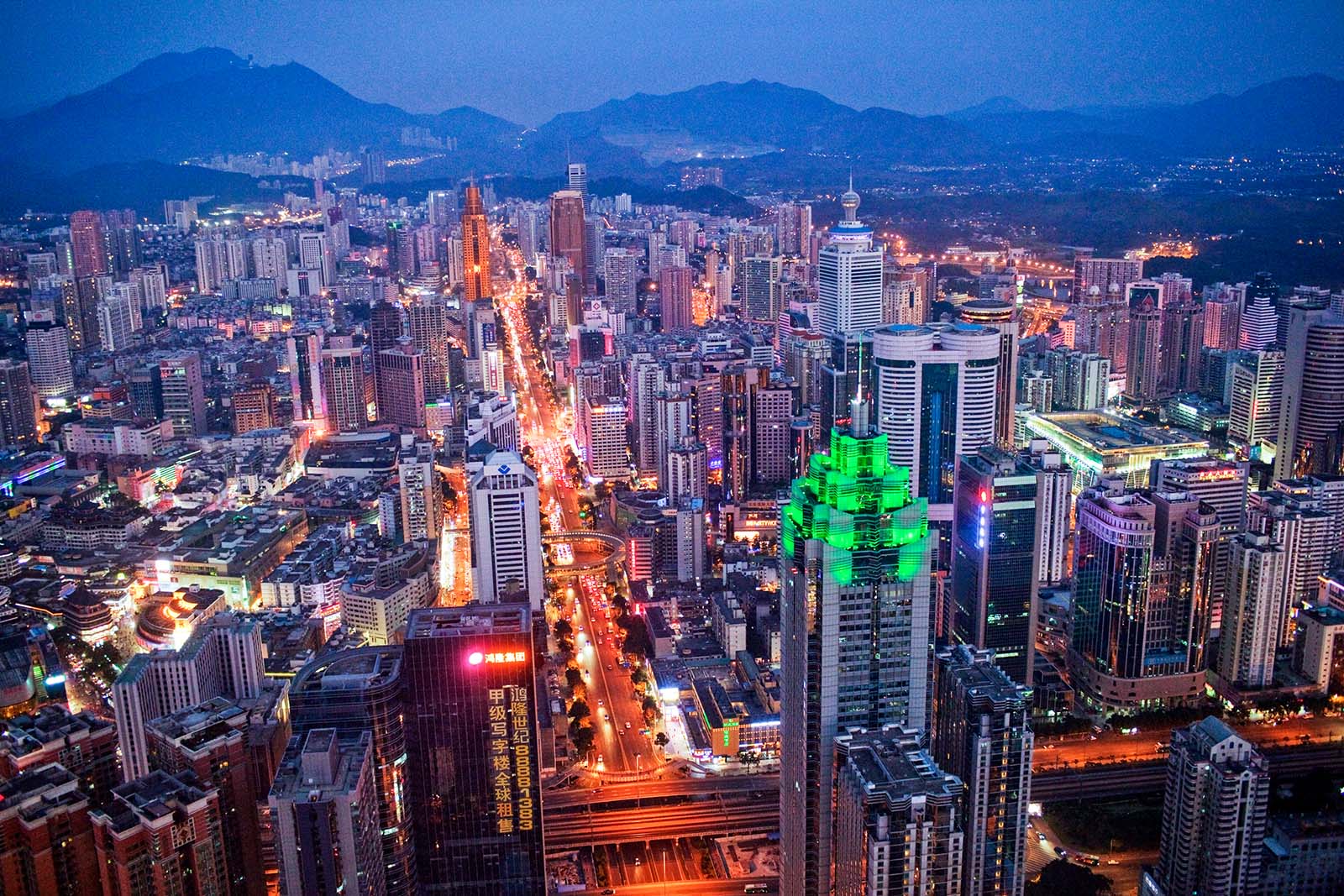 The Shenzhen skyline, including the Shenzhen World Financial Center, illuminated by green lights, stretches in to the distance in Shenzhen, China. Around the world, supercity clusters are fast-becoming mega-hubs for innovation and groundbreaking tech development.

Traveling to the city of Shenzhen in China can feel like passing through a portal to the future. Mobile-activated QR codes have replaced credit cards. Facial recognition technology instantly issues jaywalking tickets to WeChat accounts. Factories employ engineers not only to make goods, but also to augment human capabilities. Computerization, automation and AI innovation that attracts people to burgeoning megacities is, simultaneously, commoditizing human capital.

As a tech-centric megacity on the country’s southern coast, Shenzhen has China’s highest population of 20- to 40-year-olds and is well on its way to becoming the third-largest city in China. According to the World Economic Forum, Shenzhen is home to more than three million businesses and has grown its GDP by a staggering 1.2 million percent since 1978.

Shenzhen has played an outsized role in building China’s economic standing. The city is the anchor of the Chinese supercity cluster known as the Greater Bay Area (GBA), which also includes the cities of Guangzhou, Zhuhai and Foshan. GBA has the potential to surpass well-established economic metropolitan areas such as New York City, San Francisco Bay and Tokyo Bay.

Doing so, however, would require an enlightened approach, one that puts people, not technology, first.

Supercity Clusters Are on the Rise

Home to both established tech giants and startups loaded with venture capital, tech talent and resources, the San Francisco Bay and Tokyo Bay areas are in the upper echelon of supercity clusters. For example, although geographically Tokyo represents just a 10th of Japan’s total land mass, it holds 35% of the country’s population and generates almost 40% of its GDP.

Joining the expanding supercity map: Lille-Kortrijk-Tournai. This bi-national metropolitan area spans Lille, France, and Tournai, Belgium — and is now recognized as the longest-running and most successful cross-border collaboration initiative in Europe.

In China, three supercity clusters are home to a total of 300 million people, cover 400 thousand square kilometers and contributing more than 35% to China’s total GDP. Just recently, China announced plans to create 16 more supercity clusters over the next 10 years. By 2030, these clusters will account for about 80% of China’s GDP and complete China’s transformation from agrarian economy to manufacturing powerhouse.

Looming large among China’s current supercity clusters is China’s Greater Bay Area. Spanning 11 cities, GBA’s economic scale has similarities to San Francisco Bay, Tokyo Bay and New York City, and it has a GDP equal to all of Australia. It has a population larger than the United Kingdom and twice that of Canada. Geographically, it is five times bigger than Greater Sydney. China’s high-speed trains and the recent opening of the Hong Kong-Zhuhai-Macau Bridge have enabled an almost incomprehensible flow of 70 million people within a one-hour “living circle.”

Megacities will better deliver on their promises by prioritizing human needs and skills for a competitive advantage.

To realize its ambitions of scale and scope, GBA depends on integrating two systems and three currencies between Hong Kong, Macau and mainland China, as well as grappling with a wide range of differences in cultures, living standards, economic structures, trade practices, tax systems and legislation.

Humanization Is Key to Success

Enhanced cross-border movements of capital, people and goods and services are essential for the region’s successful development. The public and private sectors both play important roles — and have much to gain. However, growth and expansion will require not just disruption and reinvention, but humanization.

Disruption and reinvention are not possible without humanization. Technological innovations will not replace the uniquely human qualities that make people essential to the future of work — such as creative problem-solving, cross-cultural collaboration, emotional intelligence, empathy, reasoning and judgment.

Next-generation cities face the pressures of finding, developing and keeping highly skilled workers. In Mercer’s global research, People First: Driving Growth in Emerging Megacities, employers said employees prioritize money and work factors. But they don’t. The same study found human and social factors are more important to employees. Essentially, people want to have a safe, fulfilled and connected life. In China and across Asia, people value the personal aspects of their lives even more than the research found on a global scale.

Putting the Social and Cultural Ahead of the Economic

Thus, finding and keeping highly skilled employees demands the creation of an environment in which employees can thrive across multiple dimensions — economic, social and cultural. Doing so often requires putting the social and cultural ahead of the economic or, to put it another way, focusing primarily on what matters to people rather than focusing primarily on compensation. Greater productivity demands a better quality of life. The two go hand in hand.

Of paramount importance is noting that one size does not fit all — not for cities, not for businesses and definitely not for people. To determine what matters most, Mercer conducted a segmentation analysis of its People First participants, based on demographics, education, life stages, career progressions and levels of financial security. A number of distinct personas emerged, whose needs vary considerably. For example, younger, female and millennial White-Collar Professionals and Graduates need advice on saving money, while Business Owners and Skilled Tradespeople are interested in retirement savings, health and wellness advice and professional development.

Understanding the needs of different groups enables employers to tailor programs that better attract and retain workers. Rather than developing an employee value proposition, for example, consider an individual value proposition — one that takes into account all aspects of human needs and personalizes incentives, programs and offerings to the greatest extent possible. According to Mercer’s Global Talent Trends 2019 report, only three in 10 companies have the ability to keep up with the pace and scale of such unprecedented change.

Power to the (Supercity) People

Recognizing the GBA opportunity is one thing. Addressing the fundamental needs of people and the structural changes required to meet those needs is quite another.

GBA has the making of a successful supercity cluster and the potential to overtake the already established supercity clusters. To realize its potential, however, it is critical to put people at the core of its strategy-driven innovation and connect with them as individuals rather than as monolithic groups.

Tomorrow’s megacities and supercity clusters will better deliver on their promises by prioritizing human needs and human skills for a competitive advantage — or risk becoming a cautionary tale of what not to do.