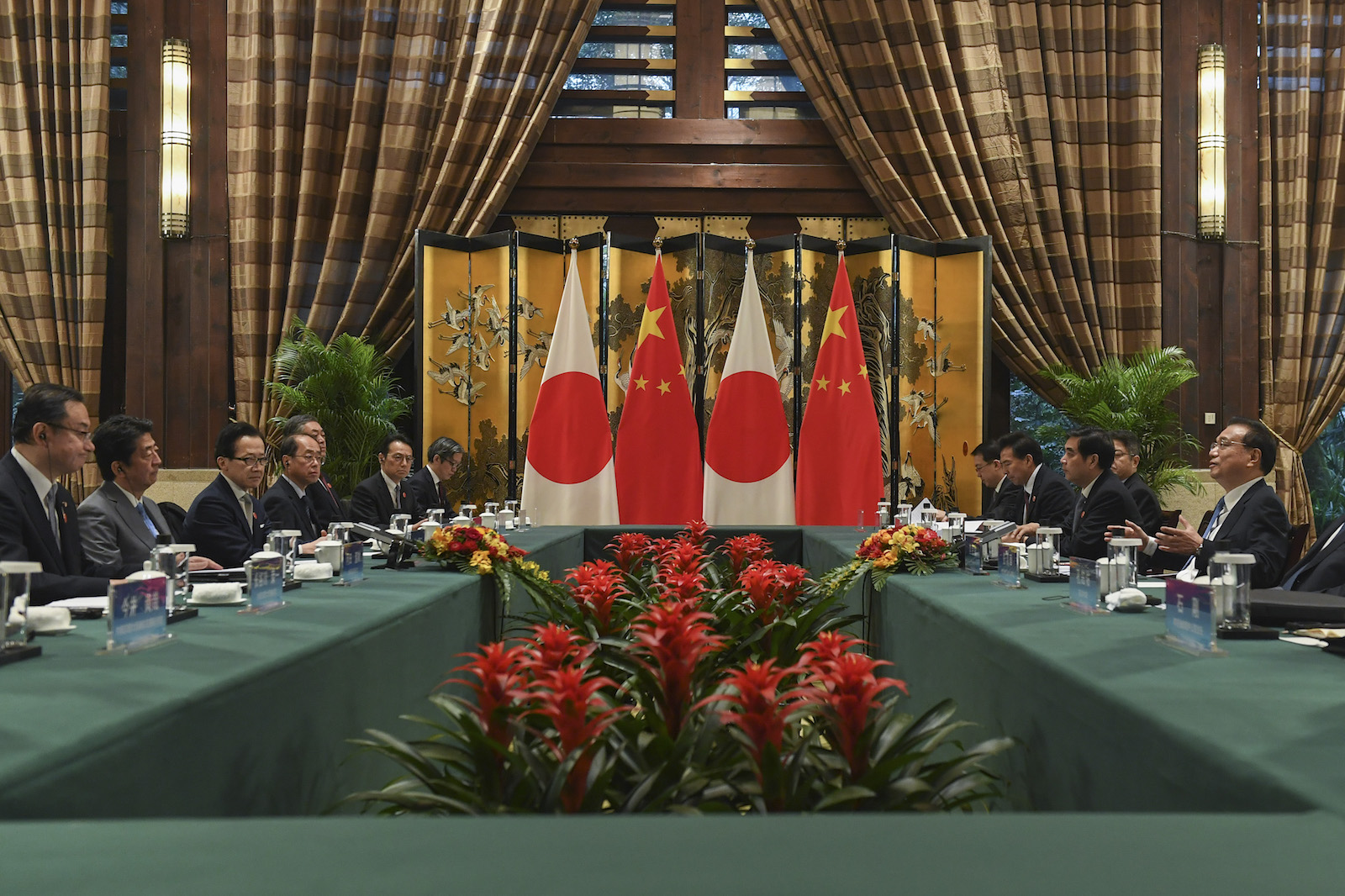 Indeed, Japan and China have been closely intertwined for more than 1,500 years through economic, cultural and political connections, perhaps longer than any other two countries.

In recent times, political relations between Japan and China have suffered from conflict, different interpretations of history, territorial disputes and Japan’s close political relationship with the U.S. But since the opening of China to the world economy in 1978, business and economic connections between these two countries have blossomed, thanks to their geographical proximity and natural complementaries.

China’s rising middle class provides a welcome market for a Japan mired in demographic stagnation, while Japan’s advanced technology offers many benefits to China, including essential components for companies like Huawei and products that China assembles on behalf of companies like Apple. The Japan-China relationship is often described as “hot economics, cold politics.”

A major rebooting of the Japan-China economic partnership occurred in 1978, when Chinese Vice Premier Deng Xiaoping visited Japan, the first-ever visit of a Chinese state leader.

Throughout the 1980s, Mr. Matsushita transferred technology, trained Chinese workers and otherwise helped China modernize its industry through 150 separate projects. China learned how Mr. Matsushita made everything from electric irons to transformers and semiconductors.

In the early days, Japanese manufacturing companies in the motor vehicle, electronics and heavy industries were taking advantage of China’s low cost structure. But today, the buying power of China’s emerging middle class is a growing attraction for Japanese companies.

With such a strong investment relationship, it is not surprising that China has also become Japan’s most important trading partner.

Trade has increased from $1 billion to some $317 billion over the past 45 years and now represents more than 20% of Japan’s total trade — even though it has suffered recently from the U.S. administration’s trade war and China’s slowdown. Japan is also China’s third-largest trading partner. The recent agreement by 15 regional economies, including both Japan and China, for the Regional Comprehensive Economic Partnership will only improve the foundations for trade relations.

Today, Japan’s services trade is being driven by a veritable boom in inbound tourists, with the number of visitors leaping from around 8 million in 2008 to more than 31 million in 2018. And not surprisingly, Chinese tourists, now the biggest group visiting Japan, have been behind this boom.

We seem to be witnessing a slow drift of Japan to a more independent role in the Indo-Pacific and in its global relations.

In 2018, some 8.4 million Chinese tourists visited Japan and spent a whopping $13 billion, accounting for nearly 34% of all spending by foreign visitors.

A similar story applies to immigration. In 2018, there were some 2.7 million foreign residents in Japan, an increase of 270% since 1990, representing 2.2% of the national population. China has now jumped ahead of Korea as Japan’s biggest source of foreign residents, with close to 800 thousand. Many of these Chinese residents are skilled workers.

The reorientation of Japan’s economy toward China represents a paradigm shift.

From 1945 until the 1970s, when the People’s Republic of China was finally recognized by the U.S. and Japan, the U.S. held Japan back from doing business with China, much to the chagrin of Japanese business. The U.S.-Japan Security Alliance gave the U.S. great sway over Japanese foreign policy, and Japanese exports were thus more focussed on the U.S. market.

But with the progressive rise of a more open and dynamic China over the past few decades, it was only natural that the historical pattern of close Sino-Japanese economic relations would re-emerge.

And the recent disdain of the U.S. in regional free trade agreements like the Trans-Pacific Partnership will only further marginalize the U.S. as a trading partner for Japan and other Asian countries.

More generally, as economic relations are drawing Japan and China closer together, so too is the erratic behavior of the U.S., especially in the trade wars. With the U.S. perceived as an unreliable political and economic partner, it is only natural that Japan and China seek cooperation together.

While Japan followed America’s lead in not signing up to China’s Belt and Road Initiative, it is now seeking to cooperate with the project. And both Japanese and Chinese leaders now speak positively of the new era of Sino-Japan relations.

We cannot say that Japan is moving away from the U.S. and toward China — the U.S. has long been Japan’s security guarantor, and Japan still feels more comfortable being aligned with another democracy. The Japan-China relationship still has many deep historical scars, too, and Japan is concerned at China’s military buildup and assertive behavior in the East and South China Seas.

But we do seem to be witnessing a slow drift of Japan to a more independent role in the Indo-Pacific and in its global relations, and as part of this, its relationship with China has become more important and will likely continue to increase in importance in the decades to come.

It’s even possible that closer people-to-people contacts between Japan and China will eventually soothe some of the wounds of history in tandem with generational change and thereby improve each country’s low public opinion of the other. Indeed, evidence is now appearing of Chinese public attitudes to Japan starting to warm.