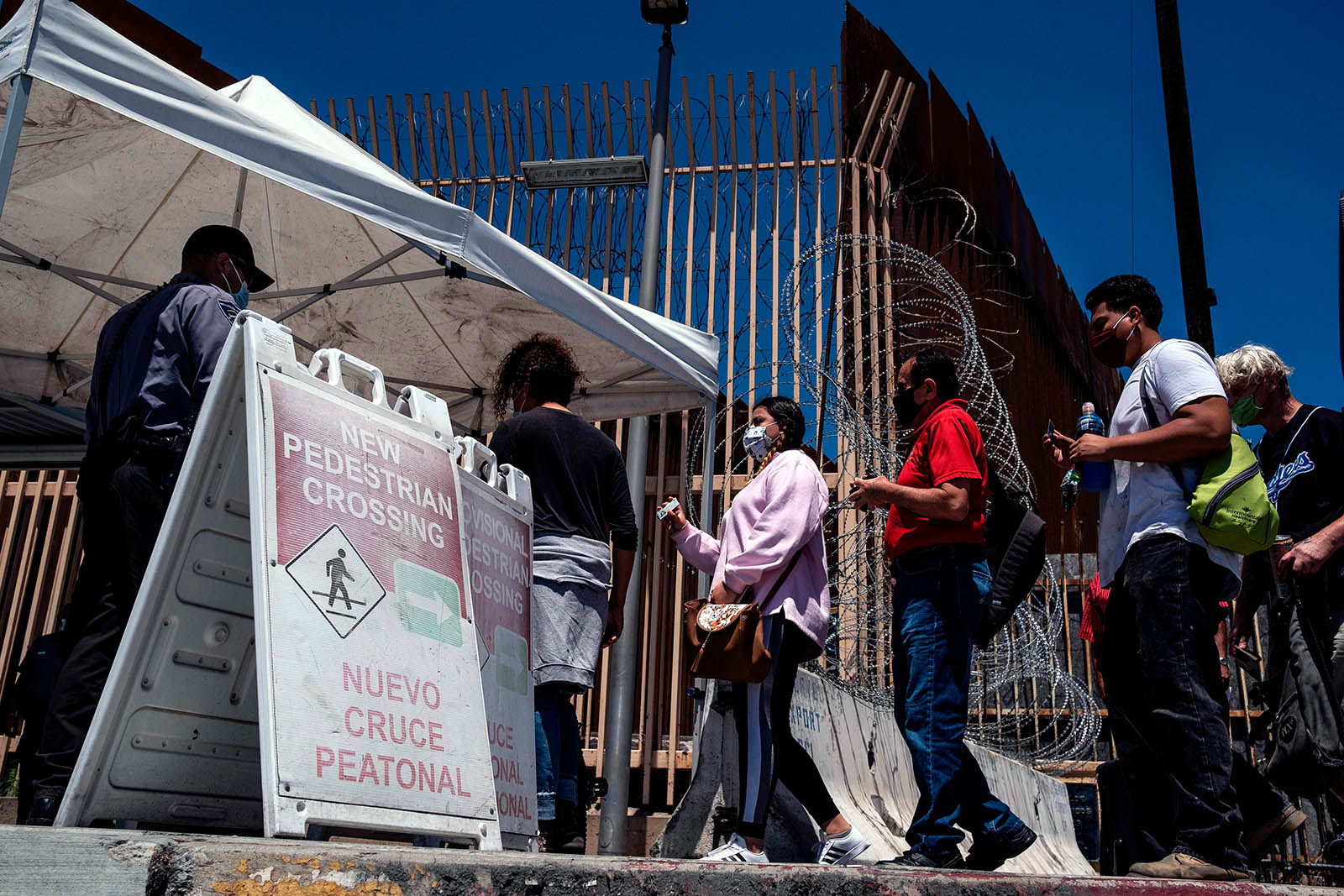 Commuters show their ID's as they enter into the United States at the San Ysidro crossing port in Tijuana, Baja California state, Mexico. President-elect Biden has pledged to reform the asylum system and surge humanitarian resources to the U.S.-Mexico border

In eight years as vice president, he visited sixteen times, more than any other U.S. president or vice president. As a senator, he was one of the architects of Plan Colombia — a bipartisan and sustained foreign policy success.

What can we expect from the incoming administration toward one of the U.S.’s fastest-growing trading partners? Latin America has changed in the last four years, and President-elect Biden can’t just pick up where Obama’s foreign policy toward the region left off.

He will find a vastly different region. The hemisphere’s economic forecast is downright glum.

The pandemic has triggered a recession like no other, dragging down social indicators and amplifying unrest. The number of people below the poverty line is expected to reach 231 million, the same level as 2005. Add to this the reality of social unrest, populism and corruption and you’ll see why the region — usually the victim of indifference — needs more hemispheric cooperation than ever.

President-elect Biden and his advisers promise a shift in tone and style in Latin America — bucking the notion of a “bully dictating policy” and President Donald Trump’s “America First” doctrine. They are calling for greater cooperation and multilateral dialogue on wide-ranging issues like COVID-19, job creation and improved governance.

President-elect Biden’s plans for the region figure into his promise to “restore moral leadership” and warn against China’s growing presence in the region. But President-elect Biden has made a point of clarifying that beyond security and economic concerns, “U.S. leadership is indispensable to addressing the persistent challenges that prevent our region from realizing its fullest potential. … We benefit from the success of our neighbors and we are impacted by their struggles.”

That also means reviving anti-corruption campaigns that President-elect Biden helped implement during the Obama administration, but which have stalled in recent years. Meanwhile, President-elect Biden’s push for greener energy investment plans could prove popular — Latin Americans are among the world’s most concerned citizens about climate change, according to numerous polls.

Already Off to a Rocky Start?

All this is easier said than done. Favorable views of the U.S. fell considerably across most of Latin America during the Trump administration. And the region today is also polarized — divided between conservative governments in Central America, Colombia and Brazil and left-leaning leaders elsewhere (the leaders of Chile, Peru and Ecuador are due to step down during President-elect Biden’s first year).

And not every country will be all-in for a Biden administration. President Trump forged a strong personal relationship with Brazil’s populist leader Jair Bolsonaro, who has dismissed the risks of coronavirus and climate change.

Mexico’s president declined to recognize President-elect Biden’s electoral victory, has rolled back support for renewable energy and has bristled at attempts to implement labor laws in the USMCA. Even politicians from President Iván Duque Márquez’s governing party in Colombia, which has enjoyed a long history of U.S. bipartisan partnership, worked to support President Trump’s re-election.

Some Latin American leaders will view the Biden administration as a return to normalcy or consistency in U.S. foreign policy — but investments need to flow fast into the region.

Reversals on Immigration and Central America

One clear policy shift from the Biden administration will be on immigration. President-elect Biden has pledged to reform the asylum system, surge humanitarian resources to the U.S.-Mexico border and end the “national emergency,” declared by the current administration, which has been used to redirect federal dollars to build the border wall.

President-elect Biden has also vowed to push forward legislation to allow an estimated 11 million undocumented immigrants to legalize their status in the United States, which could also allow for additional remittances to countries like Mexico and Central America. That effort would need to be approved by a divided Congress, where several House Democrats lost their seats, and control of the Senate rests on the outcome of two Georgia races in January.

A major tenet of the Biden administration’s approach to migration is mitigating the reasons for northward immigration to the United States in the first place. While the Trump administration withheld funds to Northern Triangle countries, President-elect Biden’s plan for Central America includes $4 billion in foreign aid to Guatemala, Honduras and El Salvador — aimed at decreasing violence, poverty and unemployment in the countries.

The Problem of Confronting Dictatorships

The Trump administration railed against the “troika of tyranny,” applying “maximum pressure” sanctions campaigns against the regimes of Venezuela, Cuba and Nicaragua. But President-elect Biden argues that Cubans became worse off under President Trump and that Venezuela’s leader Nicolas Maduro grew stronger.

Regarding Venezuela, President-elect Biden rejected President Trump’s frequent references to military solutions. He has said that the U.S. “should not be in the business of regime change” and should focus instead on promoting free and fair elections. Indeed, President-elect Biden was the first Democratic presidential candidate in 2019 to support Juan Guaidó as interim president.

A Biden administration will have no quick Venezuela fixes in its pocket. President-elect Biden supports extending Temporary Protected Status to Venezuelans, stronger multilateral sanctions and assisting countries affected by the mass exodus of Venezuelans. He may publicly reject the upcoming parliamentary elections in December as rigged and push regional governments and the European Union to work as a united front. But any immediate change in Venezuela is in the hands of its long-suffering citizens.

On Cuba, don’t expect a quick reversal to the Obama-era policy of detente. President-elect Biden may ease President Trump-imposed restrictions on travel and private business exchanges that have mostly hurt ordinary Cubans. But it’s not January 2017 anymore. As John Kerry recently noted: “I don’t think that anybody was pleased” with the Cuban government’s continued repression after the normalization of U.S.-Cuba relations. And, after President-elect Biden’s loss in Florida to Miami Cubans, he will be sensitive to appearing soft on the entrenched regime in Havana.

A Couple of Final Thoughts

Some Latin American leaders will view the Biden administration as a return to normalcy or consistency in U.S. foreign policy. But investments need to flow fast into the region, or normalcy will remain a dream. At the region’s largest lending institution, the new president of the Inter-American Development Bank (IDB), Mauricio Claver Carone, who previously served as President Trump’s National Security Council lead on Latin America, is becoming increasingly embattled after only three months. The region urgently needs the IDB to function well, and fixing its clunky new leadership may be one of the easiest remedies of a new Biden administration.

At a time when the U.S. will benefit from stronger southern neighbors and COVID-19 threatens to wipe away economic improvements in the region, President-elect Joe Biden’s deep appreciation and intimate knowledge of our Latin American neighbors and their peoples are a harbinger of huge hope for hemispheric relations.

Mark Campanale Founder and Executive Chair of The Carbon Tracker Initiative
URL: https://www.brinknews.com/what-can-latin-america-expect-from-a-biden-administration/
Get ahead in a rapidly changing world. Sign up for our daily newsletter. Subscribe
​​