As Clouds Gather on AMLO’s Horizon, Can Mexico Avoid a Downpour? 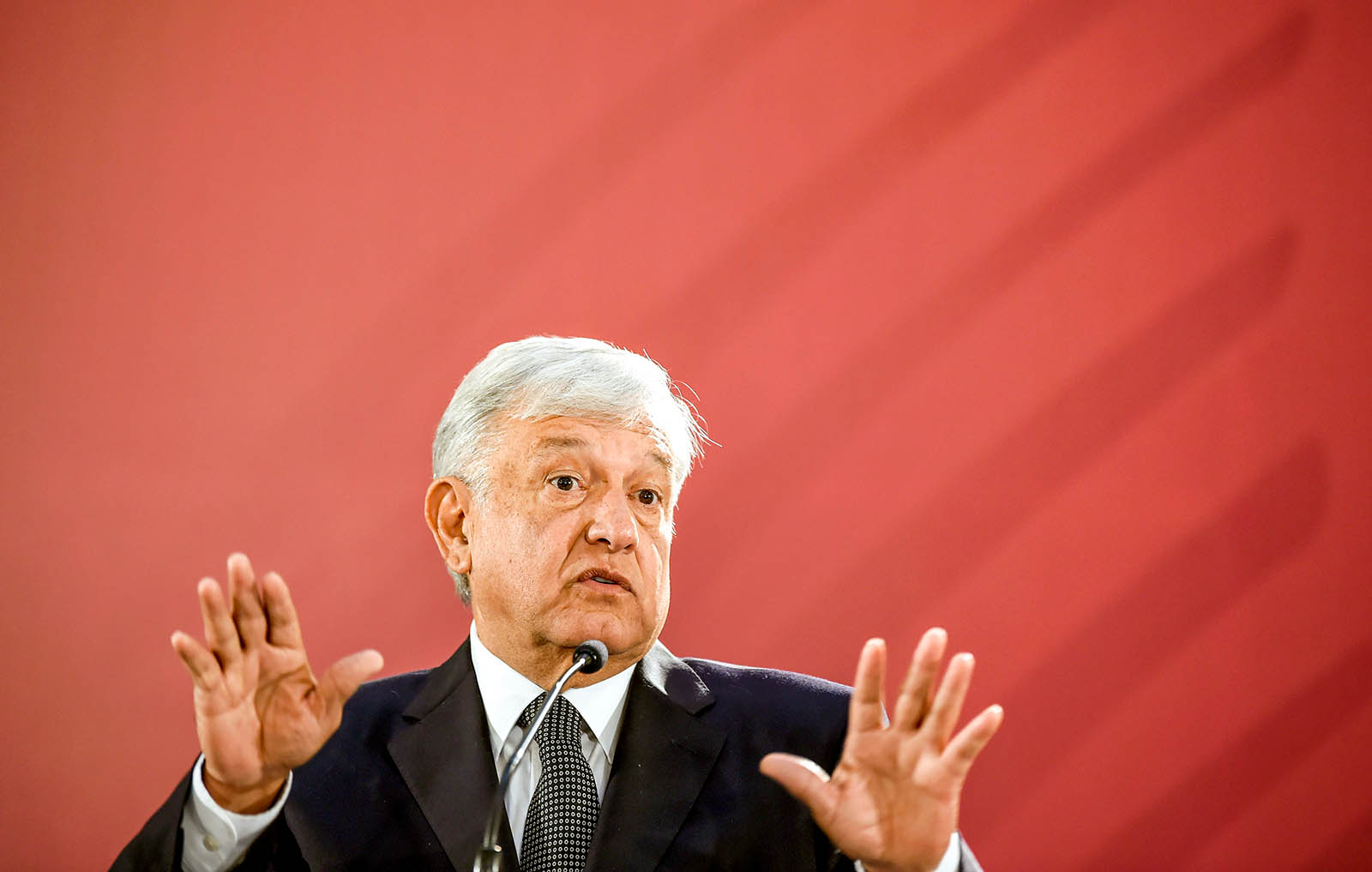 Mexico's President Andrés Manuel López Obrador gives his first press conference as president at the National Palace in Mexico City on December 3, 2018. He vowed a "deep and radical" change in Mexico as he assumed the country's presidency.

A Focus on the Poor

Opinion polls place AMLO between 60 and 86 percent of favorability. Compared to the usual standards for Latin America’s cynical and skeptical voters, these numbers are remarkably high.

Mexicans love his austere presidential style, particularly when compared to the excesses of his predecessor. After selling the presidential Boeing 787 Dreamliner, he now travels economy on commercial flights. He refuses to move into the presidential palace. He breaks security protocols several times a day and dives into crowds.

Importantly, AMLO’s politics—his rhetoric, his programs, his schedule—continue to focus like a laser on Mexico’s poor. Refusing to bow to the technocratic language so popular in previous administrations, he sees his presidency as a voice for the poor. It is more than rhetoric: The president champions anti-poverty policies—what he calls the “new Mexican revolution”—that transfer important new social programs money to Mexico’s poorest states.

But changing a country as complex as Mexico requires iron discipline, political dexterity and a lot of luck for good measure. The challenges are complex.

Success on the social front requires an expanding economic pie. President López Obrador habitually promises four percent average annual growth, but so far, economic expansion has stagnated between 1.4 and 1.7 percent. In the first quarter of 2019, Mexico’s GDP contracted by 0.2 percent, and the growth projections are uninspiring.

Because of his populist policies, AMLO has a rather fraught relationship with the private sector. He promises to do away with the country’s “rapacious” elite. In an interview on our podcast, Altamar, the U.S.’s former ambassador to Mexico, Roberta Jacobson, said that the government has “moved on to the regulators, some of the very independent institutions that the business community desperately wants to see in Mexico in order to safeguard investments and level the playing field.”

Corruption Is Still a Problem

President López Obrador promised to bring cartel-related violence to heel, but sadly the first three months of 2019 have been the bloodiest in Mexico’s recent history. Mexico’s National Public Security System registered 58 deaths a day between January and March, amid criminal organizations fighting for control and anti-crime militia further fanning the flames of violence.

In March, the Mexican Congress, where the government has a majority, approved the formation of a new National Guard, which was billed as the smarter alternative to previous President Enrique Peña Nieto’s approach of heavy militarization. But the new force appears to be similar to the military in a different uniform. Human rights agencies worry that the government is simply transferring policing functions to a military-led force.

AMLO ran on a fierce anti-corruption platform, however, most government contracts are still awarded directly without competitive bids, and no official of the unpopular previous government—that AMLO billed as the most corrupt ever—has been charged with any crime.

The Relationship with the U.S.

Meanwhile, Mexico’s most important free trade agreement continues to lack legislative approval in both the U.S. and Mexico. If the U.S. Congress rejects the United States-Mexico-Canada Agreement to demand additional changes, or tries to stall the vote until after 2020 elections, some analysts worry that President Donald Trump could officially withdraw from NAFTA, leaving the United States and Mexico without a legal framework to oversee the more than $1.7 billion in trade that crosses the border each day.

The U.S. government’s recent aid cuts to Guatemala, El Salvador and Honduras could spur greater migration to the U.S., leaving Mexico in a difficult political situation. And with the U.S. 2020 elections approaching, President Trump probably won’t be able to resist targeting Mexico once again to rile up his base.

Fortunately, AMLO still has the political capital to implement important changes in Mexico. Despite setbacks, he remains wildly popular. But Mexico’s long-term success depends on policy results that match his crowd-pleasing rhetoric.