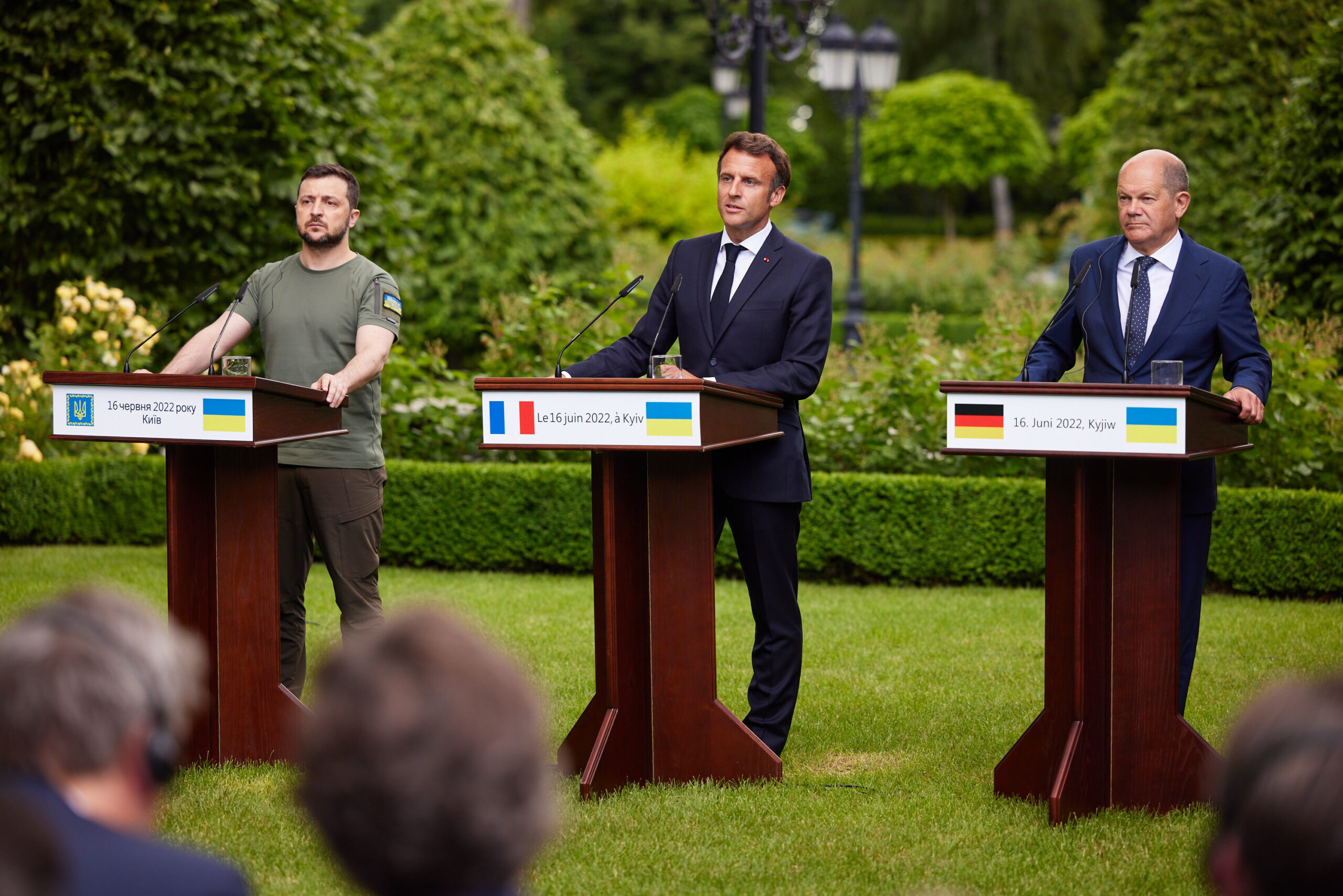 Ukrainian President Volodymyr Zelenskyy (left) with French President Emmanuel Macron and German Chancellor Olaf Scholz at a press conference in Kyiv. The EU leaders announced they would back Ukraine’s candidacy to join the EU.

Photo: The Presidential Office of Ukraine via CC

With their joint visit to Kyiv last week, the leaders of France, Germany and Italy aimed at limiting the damage caused by months of misunderstandings, political timidity and outright diplomatic mishaps on the conflict in Ukraine.

Leaders of the three countries had been widely criticized for being too accommodating toward Russia, mainly to protect their respective economies from the fallout of the war. Germany’s chancellor Olaf Scholz stood accused, at home and abroad, of announcing big weapons deliveries to Kyiv that so far have failed to materialize.

French president Emmanuel Macron was seen as guilty of worrying too much about an honorable way out of the conflict for President Vladimir Putin. As for Italy’s Prime Minister Mario Draghi, he is in the unfortunate position of representing a country with a political class that still has a very ambivalent relationship with Russia.

The visit in Kyiv clarified that there is no way back for President Putin’s Russia into a new, common-security framework. He will remain the pariah in Europe. Regardless of the outcome of the conflict, containment is the new policy toward Russia. Moscow’s reaction was prompt. It cut further gas deliveries to the EU, escalating the economic war the two sides have been engaged in since the beginning.

Barring vetoes from one or more member states, the European Union will indicate a concrete path toward membership for Ukraine and Moldova. Membership won’t happen overnight, and it does not represent a sufficient security guarantee, of course. However, it should be interpreted as a sign that the EU does not accept the sphere of influence doctrine that President Putin is trying to enforce.

Enlargement will trigger an urgent debate about the way the EU works, as unanimous decisions would become even harder to achieve in the future. “The EU needs to prepare itself and modernize its structures and procedures,” Scholz explained during his visit to Kyiv. In other words, treaty changes may be necessary. Better to start working on them soon.

At the same time the old Western Europe — Germany, France, Italy, Spain, or the Benelux countries, to name a few — have to come to grips with the reality of a likely eastward shift in the balance of power of the EU. If and when Ukraine joins, together with Poland, it could form a powerful block within the EU. Poland is a frontline state now and is quickly gaining a more prominent role within the Union. Other, older member states will have to take that into account.

However, Poland is not part of the single currency area and does not seem to be interested in joining the euro anytime soon. Thus, the debate about a multi-speed Europe will regain traction. President Macron is even proposing a still vaguely defined outer ring made up of non-members, all loosely linked to the EU, potentially including even the U.K. These countries would share common security objectives, in an OSCE-like structure expanded in scope, but notably without Russia.

At next weekend’s summit, the NATO alliance will commit additional resources to Ukraine, anticipating a long conflict — and increasing the need to interoperate with NATO forces. This will push Ukraine even closer to NATO, even if the country won’t become an official member in the foreseeable future. In addition, NATO will deploy more troops in or for the Eastern flank — Germany, for example, has announced it will build a brigade for that purpose. NATO leaders are also working on a new strategic concept.

The conflict in Ukraine has spurred a new debate on the need for a common defense as it has become clear soft power alone is not a sufficient deterrent in the 21st century.

The changing posture of the alliance is the opposite of what President Putin tried to achieve by initiating the conflict with Ukraine on NATO’s doorstep. Even if Finland and Sweden’s application for full membership should fail at the Madrid summit because of Turkey’s possible veto, many expect that a dense network of bilateral agreements and guarantees could replace membership and bypass Ankara’s opposition.

A Beefed Up EU Defense Force?

Back in 1954, the first plan for a European defense community failed. Since then various attempts at creating an EU defense structure have come and gone, and the EU’s external action service — the EU foreign ministry — was quick to push that idea when the conflict erupted.

Often, they were championed by France, worried in part by the possibility that the U.S. may not be a reliable partner of Europe in the future, but also by the strong desire to add hard power to the soft power of the EU. The conflict in Ukraine has spurred a new debate on the need for a common defense as it has become clear soft power alone is not a sufficient deterrent in the 21st century.

However, recognizing the need on a rational level doesn’t necessarily make political progress faster. In fact, we still don’t seem close to any real, concrete breakthrough. On the contrary, as NATO applications by countries such as Finland and Sweden demonstrate, the appeal of NATO and the U.S. military umbrella, has increased rather than dwindled. The Baltic states, wary they may be the next target of President Putin’s grandiose imperialist designs, certainly value America’s promise to honor Article 5 of the NATO charter.

To frontline states, the ability and commitment of the U.S. to arm Ukraine with a wide range of weapons, understandably speaks louder than the stated intention of starting work on an EU common defense capability. Certainly, procurement decisions in member countries could be streamlined and made more efficient. There is also much talk about setting up a common defense fund, along the lines of what the EU Council did in response to the COVID emergency. These discussions are certainly positive. But they don’t address the immediate needs of the ongoing conflict and may well fade away once the emergency is over.

It’s unclear whether France, Germany and Italy will resist the temptation to look for a quick way out of the conflict. With rising inflation putting pressure on the purchasing power of citizens and growth slowing down fast, how long will voters accept that economic sacrifices are necessary to restore a real and lasting peace? So far, by resisting outright bans on Russian oil and gas imports, many EU leaders have suggested they are more concerned about how much hardship their citizens will tolerate.

Alexander Privitera Fellow at UniMarconi, Rome
URL: https://www.brinknews.com/europes-new-security-posture/
Get ahead in a rapidly changing world. Sign up for our daily newsletter. Subscribe
​​