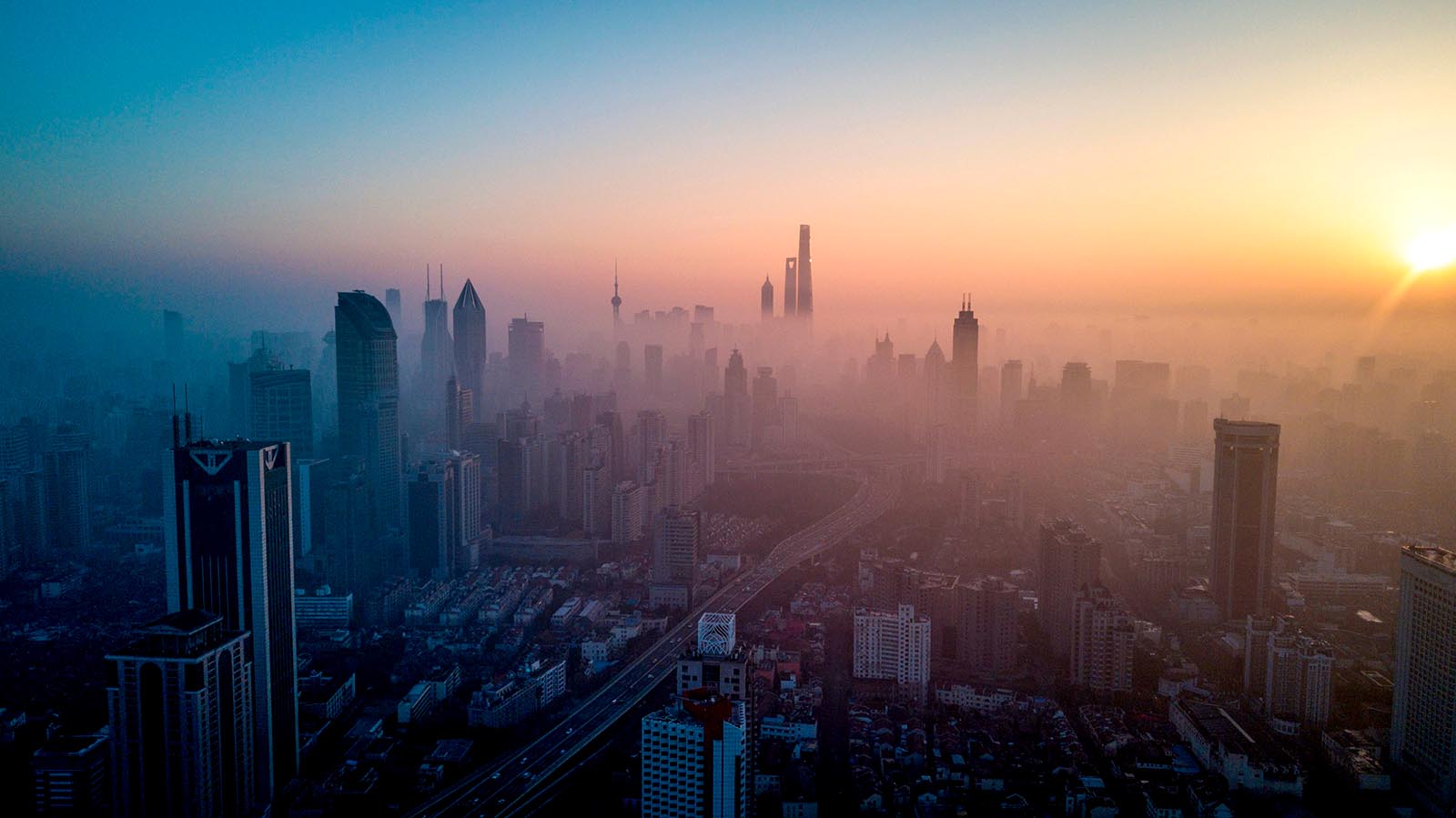 This overhead photo shows the sun rising above the skyline of Shanghai.

During this last week of the year, we are looking back at some of the most interesting themes and ideas that appeared on BRINK during 2018. Yesterday, we examined the issue of technology. Today we look at how we covered cities on BRINK.

In the center of Newark, New Jersey, is a farm that produces 2 million pounds of greens and salad a year. Yet if you went to visit it, you’d find no fields or tractors. In fact, the “farm” is housed in an old steel mill.

Jason Clay of the World Wildlife Fund wrote about Aerofarms in his piece titled Is the Future of Farming Vertical?, which made the case for developing food production in cities. “By creating vertical, urban food production, we can … give more consumers what they want: local food that’s produced more transparently and sustainably, that is, with less waste and fewer impacts,” he wrote.

This theme was echoed in an article by Haydn Shaughnessy, who argued that cities need to take on greater responsibility for their food security, especially in the megacities of the developing world. Rather than treating the countryside as a supply chain, Mr. Shaughnessy said that cities should join forces with rural areas to build cooperative ecosystems of producers and consumers.

What’s the Best City in the World?

One of the most popular pieces we ran on cities this year was about Mercer’s Quality of Living City Survey. Despite uncertainty about the state of the European Union in the wake of Brexit, a wide range of European cities appeared at the top of the ranking: Switzerland and Germany shared six cities in the top 10: Zurich (2), Munich (3), Dusseldorf (6), Frankfurt (7), Geneva (8), and Basel (10). Munich had moved from 4th to 3rd, and Vienna was No. 1.

The Future of Cities

By 2050, 70 percent of the world’s population is expected to live in cities. This was our starting point for a week in July dedicated to the future of cities. In his opening piece, 5 Predictions for the Future of Our Cities, Teemu Puutio explained that cities are going to attract more and more workers, not just because they have more jobs but because “cities excel in fostering community attachment, which is found in open spaces ripe with social offerings, accessible educational systems, and opportunities for civic involvement.”

In his piece Two Simple Steps to Unlock the Hidden Wealth of Cities, the former director of Sweden’s Ministry of Industry, Dag Detter, offered an intriguing way for cities to unlock additional revenue for infrastructure—which might help them to move up the Mercer index—by unlocking the public value of poorly utilized real estate or monetizing its transportation and utility assets. “Smarter asset management, in other words, would yield a return that would enable [Boston] to more than double its infrastructure investments,” he wrote.

Apparently, cities are starting to flirt with the idea of raising their own cryptocurrencies. The purpose, according to Sarah Holder and Linda Poon, is to make it easier for individuals to invest in the city’s infrastructure by tokenizing bonds: “By switching to a tokenized system,” they wrote, “a college student who cares about poverty in the city can buy $20 worth, knowing the contribution is going toward, say, an affordable housing project. He can then use the tokens on other city goods, such as transit rides or groceries, or he can hold on to them as an investment.”

Blockchain is another technology that is being held up as a savior for cities. But according to Alisa DiCaprio of R3, hardly any cities have figured out how to use it. There are, however, a few areas of particular promise in her view: Government records, for example, could be made more accessible, reliable and transparent by blockchain. “Corruption, misadministration, destruction of records and opacity of bureaucratic systems are just a few of the difficulties surrounding access to public records,” wrote Ms. DiCaprio.

But Amando O’Rourke challenged the idea that technology offered a panacea for cities. She cited the way in which cities rushed to accommodate the automobile at the beginning of the twentieth century and the disastrous effects that that had on creating ghettoized communities, health problems and urban sprawl.

Professor Chye Kiang Heng echoed this thought in a BRINK interview about Singapore, widely regarded as one of the best-managed cities in the world. Good jobs and education, public housing and transportation, safe drinking water, and a clean and green environment were the top priorities for Singapore’s early planners. “Many of these priorities are commonplace today,” Professor Heng said, “but they were innovative more than half a century ago.”

Cities often face similar sets of challenges, but in very different ways. Lots of cities have empty housing, for example, but few have as many multimillion-dollar ones as London—thanks to foreigners who are buying up apartments in London as a place to park money rather than a place to live. Forty-two percent of homes owned by foreigners in the city are currently empty. Likewise, many cities have traffic problems, but few as dire as Dallas, which is facing massive congestion in the next decade caused by urbanization, increased ride sharing, and the arrival of autonomous cars and trucks.

Here are some of the most interesting data points about cities that emerged on BRINK during the course of the year:

Tomorrow, we look at how BRINK covered the workplace, from burnout in the C-suite to the biases that impact our decision-making.

Natalie Stewart Senior Associate at Duane Morris
URL: https://www.brinknews.com/brinks-coverage-of-cities-in-2018-suggests-a-vibrant-urban-future/
Get ahead in a rapidly changing world. Sign up for our daily newsletter. Subscribe
​​