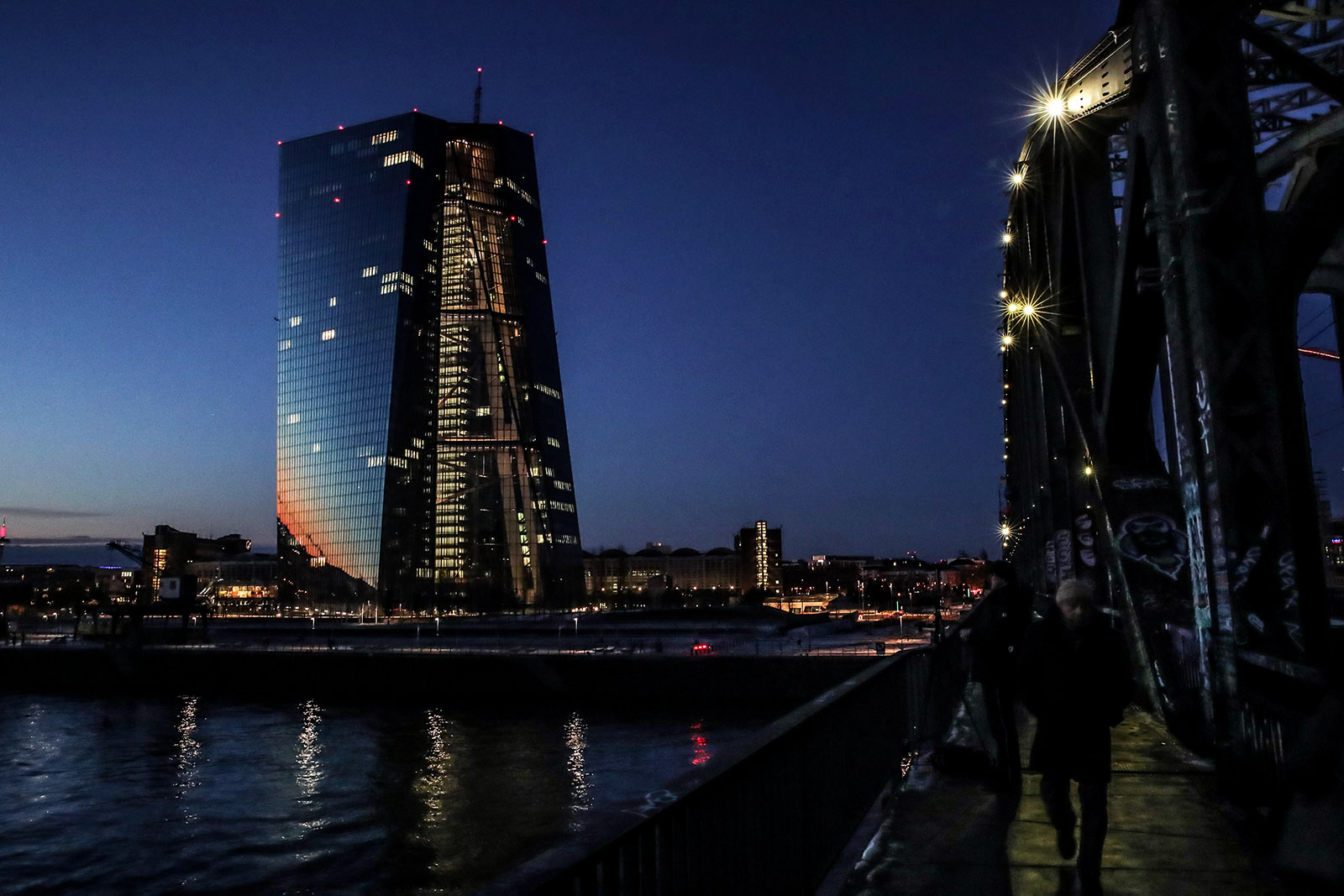 The ECB is pictured during the blue hour in Frankfurt, western Germany, on February 10, 2021. Given the reliance of European economies on banks’ funding, this is one of the main areas of concern for policymakers.

Even Europe has finally entered the homestretch of the pandemic. Vaccinations are gaining pace and there are early signs that the economy is rebounding. Manufacturing orders have picked up for some time now, driven by strong demand in Asia and the U.S. Even in the service sector, things are finally improving. And yet, not all is well.

It has been clear for some time that the recovery in EU countries will not proceed in a synchronized manner. Economic activity in Germany is expected to reach pre-crisis levels by next year, while Italy will have to wait until 2023, for example. At their first in-person meeting after lockdowns were lifted, EU finance ministers recently listened to yet another appeal not to let their guard down.

As the Brussels-based think tank Bruegel made clear in its comprehensive list of priorities for policymakers, “policymakers must act to prevent lasting divergence within the EU and to prevent scarring from the fallout from the pandemic. The first priority is tackling the global health emergency. Second, we warn against premature fiscal tightening and recommend instead additional short-term support from national budgets.”

So Far So Good

So far the policy response has been pretty impressive. Despite lockdowns, the expected deterioration of the quality of assets on European banks’ balance sheets has not yet materialized. Supported by various public and private support measures, borrowers have largely continued to service their debts.

The expected wave of non-performing loans has not materialized. Banks are finally becoming more cautious about lending, but for now credit continues to flow. Given the reliance of European economies on banks’ funding, this is one of the main areas of concern for policymakers. The continent can’t afford a credit crunch caused by a wave of non-performing loans (NPLs). The financial sector is also one in which striking the right balance between support and prudence is very difficult, and the ECB seems to be skeptical about the gravity-defying trend that the banks’ NPL numbers seem to suggest.

The Risk of Zombification

Given the impact of COVID in particular on some sectors of the economy, such as travel and leisure, many borrowers are expected to be in distress once support measures are lifted. The fear of policymakers is that if they are lifted too early, firms and households won’t have enough time to repair their balance sheets.

Despite rising public debt levels everywhere in Europe, some countries are faring much better than others — will European governments have the strategic patience to grant countries ample time to get back on track?

If support is granted for too long, however, non-viable companies will be kept alive artificially, creating a zombification of large swathes of the economy. That would weaken banks and impair the ability to support those activities that have a better chance to grow and create new jobs.

However, trying to separate viable from non-viable businesses will never be easy, not least given the fact that because of the needed greening and digitization of the economy, it is harder to assess what “viable” means exactly. Some of the support foreseen in the European Recovery Fund is specifically linked to accelerating the structural transition of European economies. Once funds start getting disbursed, expect to see some interesting discussions between European capitals and the European Commission.

It will be crucial for Europeans to try to maintain the spirit of solidarity it showed during the darkest hours of the past 15 months once the emergency phase is replaced by managing the recovery. We have witnessed a timeout from the usual European debates between fiscal hawks and doves, north and south, but once the recovery gains traction, and especially if it does so at different speeds in different countries, those debates are likely to make a comeback.

German Hawks Will Be Watching

If inflation goes up, German-led hawks in the European Central Bank’s governing council are expected to call for an end to the extraordinary monetary policy support. The fear of so-called fiscal dominance may well be justified, but perhaps, given the less than stellar record of monetary policies in hitting their inflation targets, massive fiscal support was the missing leg.

Europe Struggles to Find a Unified Response to COVID-19

The problem is that, despite rising public debt levels everywhere in Europe, some countries are faring much better than others. To put it simply, countries with high public debt levels have seen their debt-to-GDP ratio grow much more than those who came into the crisis with solid finances.

Only a combination of growth and some inflation would be able to reduce the debt burden over time. The big question is whether European governments will have the strategic patience to grant countries ample time to get back on track. Much will depend on public opinion in individual EU member nations.

How much is the public in stronger countries like Germany willing to stomach if the recovery in weaker ones proves to be uneven and fragile? The answer to this question will tell us whether Europe has really learned from past mistakes.

Hamza Mudassir Lecturer in Strategy at University of Cambridge
URL: https://www.brinknews.com/europes-two-speed-recovery/
Get ahead in a rapidly changing world. Sign up for our daily newsletter. Subscribe
​​