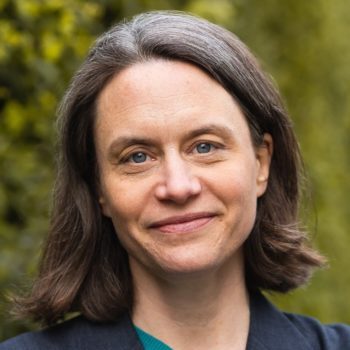 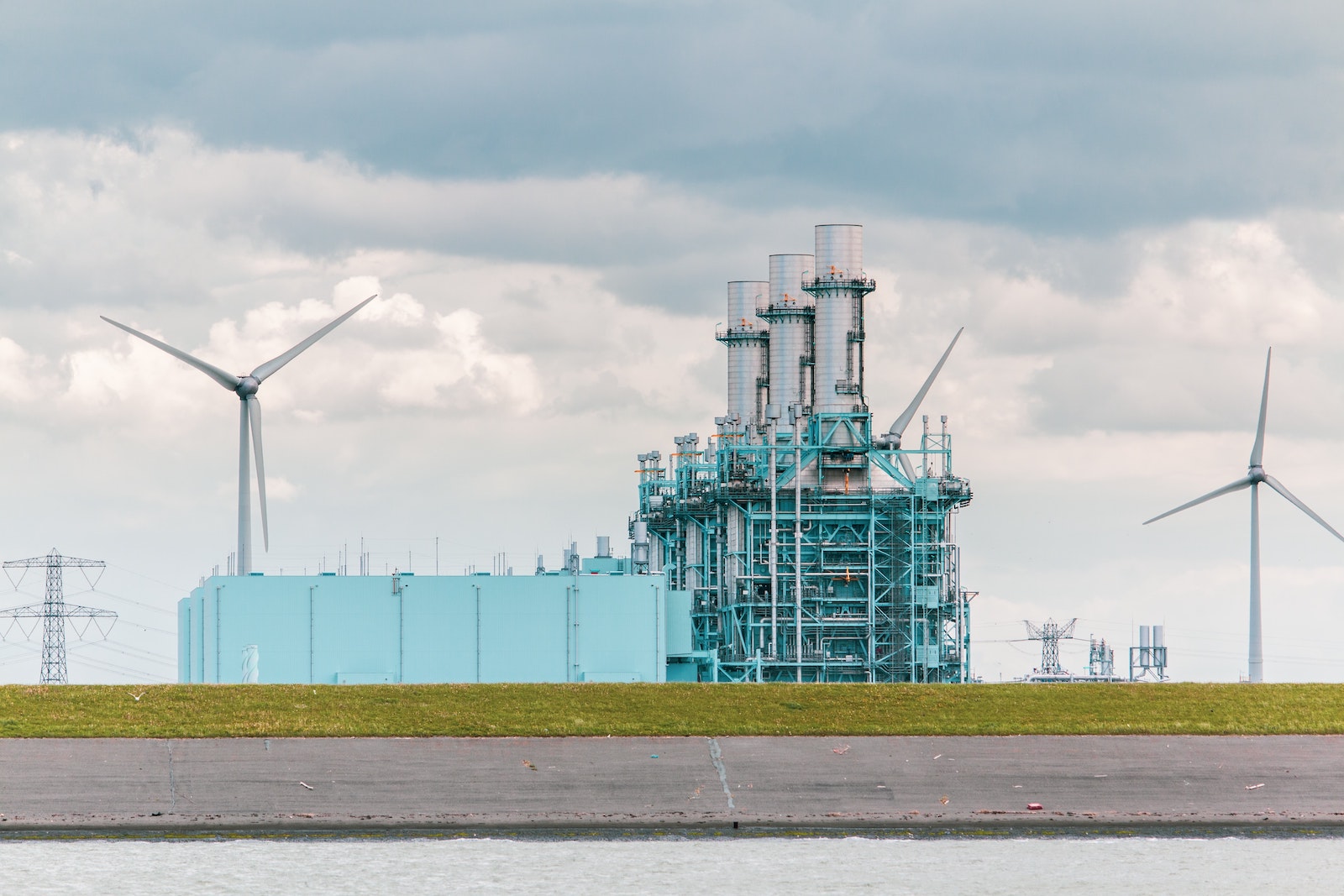 Wind turbines sit just off of a traditional power plant in the Netherlands. One way to decarbonize your portfolio is to get rid of your high-emitting stocks or assets.

Big promises are being made in the financial sector around getting the sector to net zero.

After COP26, there’s a recognition that it’s no longer sufficient for investors simply to divest their carbon intensive assets. But who carries the responsibility and cost of ensuring that investments and insurance are free of carbon is very complicated.

Kate Levick is the associate director for Sustainable Finance at the climate change think tank E3G, responsible for overseeing E3G’s work on public and private finance including systemic financial reform.

LEVICK: Over the course of 2020, and in particular, 2021, we saw a real step change in how mainstream an issue decarbonization has become. This is now a central concern for the financial sector.

Increasingly, firms are seeing themselves being subject to more regulation, which is one of the drivers for this behavior. But another driver is realizing that this change really does look like it’s underway and wanting to get ahead of it in investment terms and make money as these new industries and sectors of the future grow — and not just be left holding the industries and sectors that are no longer going to be viable.

The Glasgow Financial Alliance for Net Zero (known as GFANZ) is a bit of a wrapper, which has a number of different sectoral initiatives underneath it. But the one thing they all have in common is this pledge to get to net zero by 2050. There’s been absolute proliferation of subsector initiatives. So there’s one for banks, there’s one for insurers, asset owners, asset managers, financial service providers, the list goes on, really.

How Will This Work in Practice?

BRINK: How do you see this working in practice? How will an asset manager try to get their portfolio to net zero?

LEVICK: The first thing they need to understand is what carbon is in the portfolio. Financial firms have a lot more information about that these days.

After that, it’s looking at different ways to take action. Of course, one way to decarbonize your portfolio is to get rid of your high-emitting stocks or assets. But on a 2050 time scale, there is the scope for more sophisticated approaches.

Trading doesn’t in itself cause emissions to rise or fall. But it’s fair that companies who are engaged in trading activity look at the future for those commodities that they’re trading in, whether it’s Bitcoin, whether it’s coal, or whether it’s something else.

Do You Have a Transition Plan?

One area that’s receiving a lot of attention right now is to look at what transition plans the underlying firms have got. There’s now increasing expectation for firms to be making transition plans to net zero by 2050.

That’s now an expectation within the TCFD disclosure rules following a consultation last year. And the U.K. government came out at COP26 and said that in the U.K., listed companies and financial firms would have to disclose their climate transition plans by 2023. So these regulatory expectations are coming down the line, and firms that take voluntary action now are just really getting in ahead.

BRINK: Presumably it’s not as easy as it might sound to map exactly where the carbon is. It could be within the company itself or the supply chain of that company.

LEVICK: Some sectors obviously are big primary emitters. Others may not be, but may have more what you’d call Scope 3 impacts that are outside their direct control. Investors are always going to look at Scope 1 and Scope 2 emissions first. But for some sectors, Scope 3 will be of much more interest.

And actually, one of the sectors where Scope 3 is of the greatest interest is the financial sector itself. Many of these firms, of course, are listed companies themselves, with their own investors. The emissions profile of particularly the large banks is very, very substantial in terms of climate change emissions.

BRINK: Could you explain what is the difference between Scope 1, 2, and 3?

LEVICK: This is a nomenclature that was invented under the Greenhouse Gas Reporting Protocol, which is the most widely accepted methodology for reporting greenhouse gas emissions, very widely used.

Scope 1 are emissions that you pretty much create yourself through direct combustion. That might be the gas in your boilers, for example. Scope 2 is energy that you buy, such as electricity and heat. And then Scope 3 is a very broad range of additional impacts, where the actions that you take are having emissions impacts. And that might be, for example, things like flying, or leased vehicles, it might include investments that you’re making, which is where the Scope 3 of the financial sector starts to be so big. So it’s a broader set of impacts. You’re not directly causing the emissions by turning the lights on, but if you didn’t take certain actions, those emissions wouldn’t happen.

Trading Is Contributing to Emissions

Trading is a really interesting question. Fundamentally, trading doesn’t in itself cause emissions to rise or fall. It’s not quite the same thing as making an investment. But it’s fair that companies who are engaged in trading activity look at the future for those commodities that they’re trading in, whether it’s Bitcoin, whether it’s coal, or whether it’s something else.

There’s a lot of attention being put at the moment on commodities that are created that have a lot of deforestation impacts, such as palm oil or wood. And increasingly regulation is tightening around those.

BRINK: What about investment in climate reduction and mitigation? Are there goals for that as well as just decarbonizing?

LEVICK: That is a really great question, because, of course, it’s very easy to focus on losing the emissions that we have, because we can see those big emitting companies and activities in front of us and they’re the status quo.

What’s harder to imagine is what doesn’t exist yet, which is really scaling up investment in clean air industries and sectors, including new technologies. And of course, to decarbonize your portfolio, you either need to get all those companies that you already invest in to get to net zero.

Or you need to be investing in something that’s brand new, that possibly might not even exist yet, but will by 2050. And of course, in reality, it’s going to be a little bit of both. So scaling up the green investment is a very, very important part of this.

Creating a Taxonomy of Green Activities

What a lot of governments around the world have been doing is creating lists of what they consider sustainable, green, future fit, economic activities. They’re called taxonomies. And so the EU went by creating a green taxonomy and trying to categorize different economic activities and define what sort of threshold of performance they’d have to be in to constitute a green investment.

So as those become more mature and more normal, it’ll be easier for investors to look at that in terms of their portfolios. And say, “Well, how much of our portfolios are invested in these activities that are considered green?” And there’s a standard they can hold themselves up against. At the moment, it does feel a little bit like futurology at times.

BRINK: What should we look out for this year in this sector?

LEVICK: In the U.K. particularly, look out for the development of the Transition Plan Task Force that was announced at COP26. E3G, my organization, is going to be co-leading the secretariat of that with the Centre for Greening Finance and Investment.

It will be producing guidance on what a good firm-level climate transition plan looks like, both for the real economy and for the financial sector. And since the U.K. firms are going to have to be disclosing these plans from 2023, that work is going to have to proceed pretty quickly.

I think what we will see in the context of the COP this year in Egypt, is an even greater focus on how to make this a global transition. How to really address the needs of the developing emerging economies as well. I know that Egypt will make sure that the world continues to have that focus.

Kate Levick is associate director for Sustainable Finance at climate change think tank E3G. She is responsible for overseeing E3G’s work on public and private finance including systemic financial reform.

Til Schuermann Partner and Co-Head of Oliver Wyman’s Risk & Public Policy Practice
URL: https://www.brinknews.com/the-financial-sector-is-decarbonizing/
Get ahead in a rapidly changing world. Sign up for our daily newsletter. Subscribe
​​