Outlook for Asia US Foreign Policy US: A Global Leader?
Geopolitics 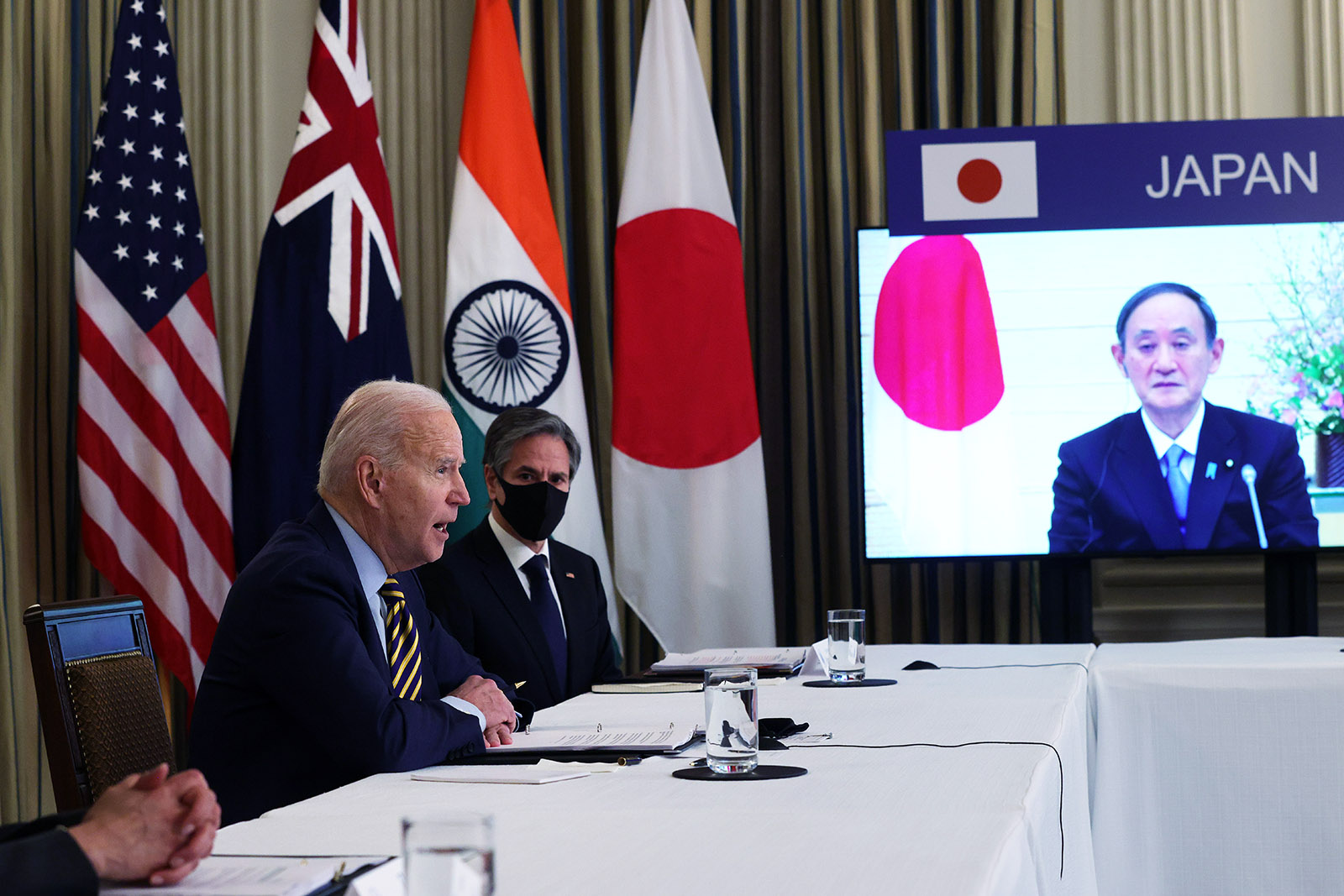 A virtual meeting with leaders of Quadrilateral Security Dialogue countries on March 12, 2021, in Washington, D.C. This was President Biden’s first major foreign policy initiative, and the meeting focused substantially on vaccine diplomacy.

Less than two months after he assumed office, President Joe Biden convened the first-ever leaders’ meeting of the Quadrilateral Security Dialogue (the “Quad”). This group of leading democracies from the Indo-Pacific — Australia, India, Japan and the United States — seeks to balance and counter China’s assertive behavior and protect the rules-based regional order.

This meeting with Australia’s Prime Minister Scott Morrison, India’s Prime Minister Narendra Modi and Japan’s Prime Minister Yoshihide Suga, which took place on March 12 by videoconference, was President Biden’s first major foreign policy initiative. It focused substantially on vaccine diplomacy, an area where China has already established a lead. The leaders agreed on a “Quad Vaccine Partnership” to supply up to one billion coronavirus vaccines across the Indo-Pacific by the end of 2022. The U.S. and Japan plan to fund Indian production of Johnson and Johnson’s single-dose vaccine, which Australia will then distribute across Southeast Asia.

Other key issues on the Quad agenda were climate change, which was identified as a priority for the Quad and the Indo-Pacific region, along with critical and emerging technologies. To take its work forward, the Quad established working groups for vaccine experts, climate, and critical and emerging technology. Highlighting the potential important role of the Quad looking ahead, the leaders agreed to hold an in-person summit by the end of 2021.

Before reaching the recent summit, the history of the Quad has been a long and winding road. The four countries came together as an ad-hoc group, the “Tsunami Core Group,” to respond to the tragic 2004 Boxing Day tsunami, which devastated communities in Indonesia, Sri Lanka, India and Thailand.

In 2007, the first meeting of the Quad was held on the margins of the ASEAN Regional Forum. The Quad was then discarded in light of China’s concerns that it was a mechanism for a China-containment policy; indeed, China fears that the Quad could become a NATO for East Asia, with China being the target.

In light of China’s assertive behavior under President Xi Jinping, in 2017, the Quad was revived as Quad 2.0 at the senior officials and ministerial level.

Since President Biden is very keen to work closely with allies and partners in balancing China, in contrast to former President Donald Trump’s go-it-alone style, he seized upon the informal grouping as a ready-made vehicle for democratic countries to work together. President Biden has even described the Quad as a “vital arena for cooperation in the Indo-Pacific.”

The Quad summit was followed by a meeting on March 18 in Anchorage, Alaska, between U.S. Foreign Secretary Antony Blinken and National Security Adviser Jake Sullivan with their Chinese counterparts, including Foreign Minister Wang Yi, the first high-level meeting between senior American and Chinese officials since the inauguration of the Biden administration on January 20.

The Quad could become an effective way for Australia, India, Japan and the United States to work together in the Indo-Pacific.

The Quad has the potential to become a critical vehicle for the U.S. in its great power rivalry with China. Although there was no reference to China in the Quad’s communique, “the Spirit of the Quad” was clear in its repeated references to a “free and open Indo-Pacific.” For example, the Quad strives “for a region that is free, open, inclusive, healthy, anchored by democratic values, and unconstrained by coercion.”

After four years of former President Donald Trump’s erratic leadership, the other Quad members were clearly delighted to see a return of the U.S. to its traditional role of leadership in the Indo-Pacific.

Australian Prime Minister Scott Morrison even described the Quad as the arrival of a “new dawn.” Australia was also heartened when President Biden’s Indo-Pacific czar, Kurt Campbell, indicated that the U.S. will not grant China any improvement in relations until Beijing stops its economic coercion of Australia.

The Chinese government was told that “we are not going to leave Australia alone on the field.” Most of Australia’s exports to China have been sanctioned since the Australian government called for an independent, international enquiry into the origin of COVID-19 in April 2020.

How Asia Can Unleash Private Investment for Its Infrastructure

But closer alignment with the U.S. also carries risks for Australia.

One of the major irritants in the Australia/China relationship is its intimate alliance with the U.S. Australia has also been a laggard in addressing climate change for some time and is now expected to come under pressure from the U.S. administration to lift its game.

For its part, Japan plays a delicate juggling game between China, its principal trading partner, and the U.S., its security guarantor. It would not appreciate being pressured to adopt hardline policies against China. And India, with its tradition of non-aligned foreign policies, is also keen to balance economic and security concerns in its relationship with China.

In short, the Quad is a case of four countries sleeping in the same bed, but dreaming different dreams!

Another complicating factor is the Association of Southeast Asian Nations (ASEAN), which goes to great lengths to not get involved in China/U.S. rivalry, despite being a major battleground for influence between the two sides. The Quad communique was very careful to give a nod to ASEAN: “We reaffirm our strong support for ASEAN’s unity and centrality as well as the ASEAN outlook on the Indo-Pacific.”

All that said, the Quad could become an effective way for the four democracies to work together in the Indo-Pacific. They may indeed be best served by continuing to work on “soft power issues” like vaccines, rather than thorny security issues like the South China Sea.

US Is More Popular in Southeast Asia Than China

Notwithstanding China’s close economic ties with Southeast Asia, the U.S. is much more popular than China in this part of the world, with rising trust in the U.S. among Southeast Asia’s upper classes, alongside anxiety about China’s dominance.

The State of Southeast Asia 2021 report by the ISEAS-Yusof Ishak Institute revealed that over 60% of those surveyed would rather see Southeast Asia align with the U.S. than with China, up from 53.6% in 2020. The report shows that the election of President Biden, the pandemic and China’s responses to it are all shifting public opinion in the region (the survey was conducted after the election of President Biden).

It also shows that Japan remains the most trusted major power among survey respondents by far. In sum, the Quad may be well served by continuing to focus on soft power issues — an area where they have a distinct edge on China.

Xianbin Yao Professorial Lecturer of International Studies at De LaSalle University Manila
URL: https://www.brinknews.com/what-does-the-quad-summit-signal-for-uss-relationships-with-asian-countries/
Get ahead in a rapidly changing world. Sign up for our daily newsletter. Subscribe
​​