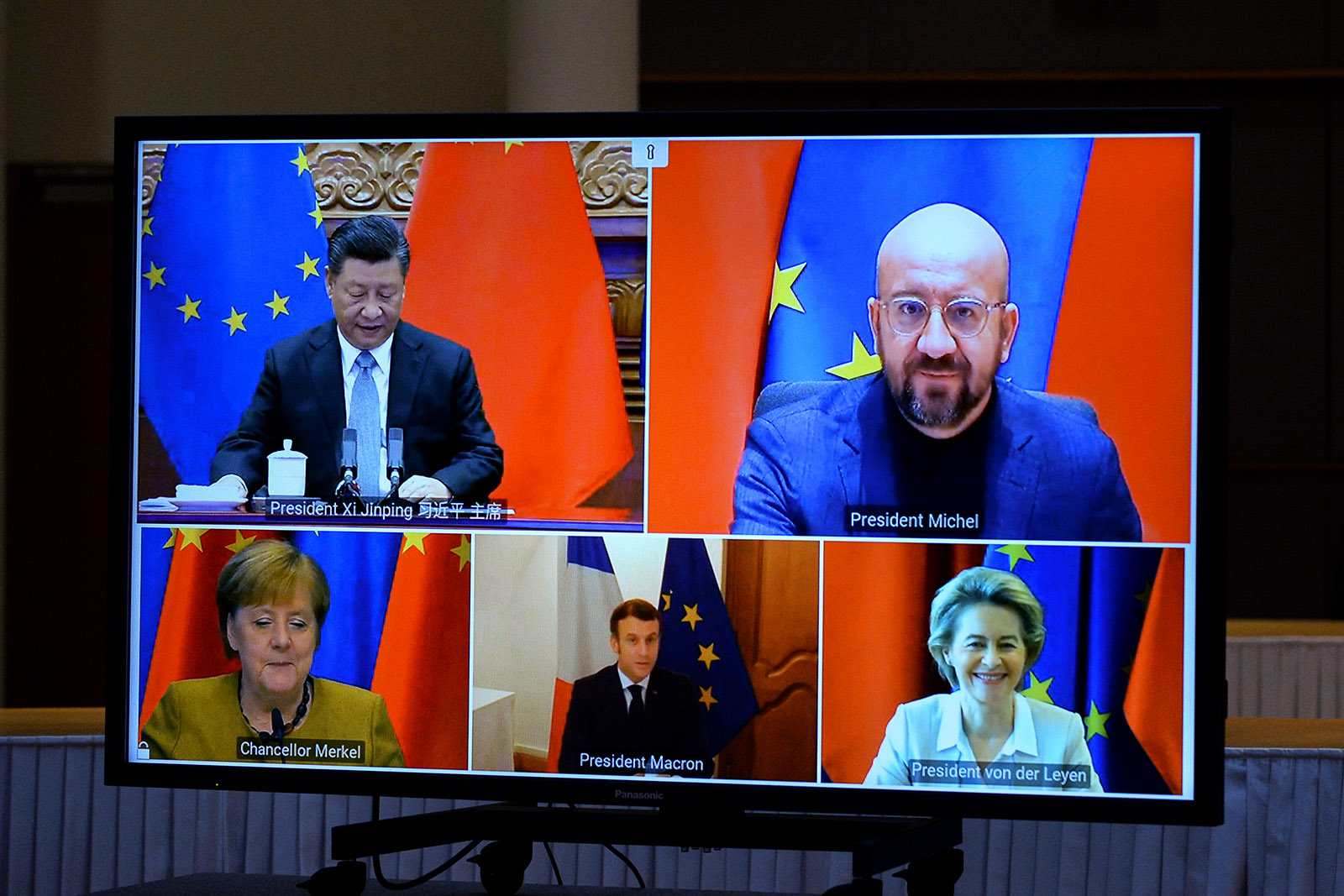 World leaders conferenced in to approve an investment pact between China and the European Union on December 30, 2020, in Brussels, Belgium. The CAI only covers investment and a number of general topics, such as labor and climate change.

After more than seven years of negotiations, the European Union and China finally reached a deal on a Comprehensive Agreement on Investment (CAI), just one day before the deadline that both parties had imposed themselves, namely the end of 2020.

A lot has been written on the pluses and minuses of this agreement, but the discussion has remained relatively EU-centric. China has offered few details of its own interpretation of the deal, other than its geopolitical significance in terms of having the EU closer to China and further from the U.S.

The new U.S. administration has, so far, refrained from taking a stance on the actual content of the deal, beyond the veiled complaint that the EU could have waited to engage in consultations with the incoming administration. The United Kingdom, which finalized its own trade deal with the EU at the same time, took its own action regarding economic ties with Asia only a couple of weeks after the EU-China deal by announcing that it would start negotiations to enter the Comprehensive and Progressive Agreement for Trans-Pacific Partnership (CPTPP).

Why Did the EU Choose to Strike Its Own Deal With China?

The CAI only covers investment and, to a lesser extent, a number of general topics, such as labor and climate change. CAI also covers transparency issues related to subsidies and state-owned enterprises (SOEs). The CPTPP is wider in scope as it covers trade, and it also has a special chapter on SOEs, which goes beyond transparency of information. One could also argue that CAI relies on the WTO for dispute resolution more than CPTPP does.

Given the above, it is important to understand why the EU has opted to strike its own deal rather than apply to join an existing agreement, namely the CPTPP.

The first reason is the EU’s size, compared to the U.K., for example, and its long-standing expertise in negotiating new deals. Secondly, it already has free trade agreements with a number of members of CPTPP, including Japan, Vietnam and Mexico, and with South Korea, which has just announced its intention to join CPTPP.

What Does the CAI Offer Europe?

The third, more subtle reason, is that the EU Commission has repeatedly stated that it is not yet ready to negotiate a trade agreement with China, but only an investment deal. Another final — and probably the most relevant — reason is that the Commission’s ultimate goals with CAI are very different from what it could have obtained from joining CPTPP: Namely more balanced relations with China regarding market access and a level playing field for investors, as well as acceptance from China of transparency rules. China’s acceptance would make it easier for the EU — or any other WTO member — to bring China to the WTO for non-competitive practices.

If the agreement between the EU and China can serve as a trigger for a reform of the WTO in which China assumes more obligations, it is most likely that it will be welcomed by the U.S. administration.

The question is, how well does CAI fare on these issues?

The CAI opens the door to European companies to a few sectors such as electric vehicles and private hospitals in 10 major cities, but the rest of the concessions are still below 50% in areas such as telecommunications and cloud services. All in all, the desired rebalancing in terms of the EU having more market access in China, given the wide-open doors that Chinese companies have in the EU is far from complete.

Regarding the level playing field, the agreement improves the degree of transparency in the information that Chinese companies must offer about subsidies and, in the case of public companies, their commercial activities. This information can facilitate the opening of cases against Chinese companies in the WTO, but the agreement does not have ad hoc dispute resolution mechanisms in the area of subsidies. In more general terms, the conflict-resolution mechanism provided in the agreement is state to state, so its use may by unlikely, other than in exceptional cases due to the political significance it entails.

Dependent on a Revitalized WTO

The unfair treatment that an EU company in China may be subject to as a consequence of subsidies or SOE behavior, more generally, remains absent in the deal, and the only way out for EU companies is to use WTO litigation instruments.

The poor functioning of the WTO during the last few years and the lack of instruments to deal with non-market economies imply that, without a thorough reform of the WTO, CAI will not be very effective in dealing with the lack of level playing field in China.

Ironically, the deal could actually reveal some of the EU’s own weaknesses in terms of its negotiating power, as the achieved market access is not very large and nor is the improvement of level playing field conditions. It is still heavily dependent on a reform of the WTO, which the EU cannot achieve by itself.

If the agreement between the EU and China can serve as a trigger for a reform of the WTO in which China assumes more obligations, it is most likely that it will be welcomed by the U.S. administration. By contract, if this agreement increases European dependence on China or facilitates Chinese access to key sectors facilitating its technological advancement, there’s no doubt that the United States will see it as prime interference in its relationship with Europe, especially in the field of security.

Only time will tell if the European Commission — pushing the agreement to reach the proposed goal in the midst of pandemic and with member states looking the other way — has done the right thing.