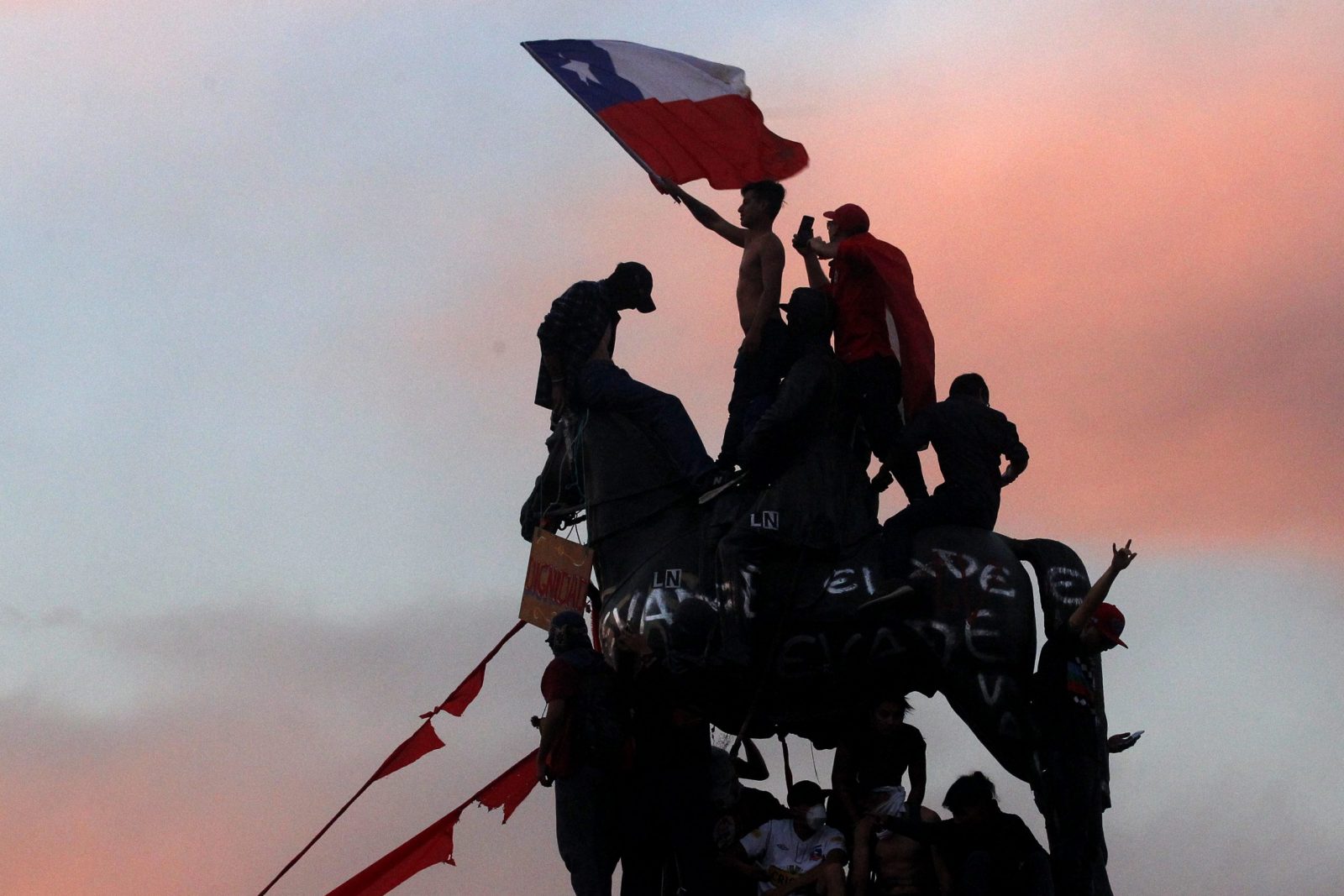 Protesters wave a Chilean flag during the eighth day of protests against President Sebastian Piñera's government on October 25, 2019, in Santiago, Chile. Protests called for a change on a broad range of social issues and greater economic fairness.

Chile, long considered an economic miracle in Latin America and the most stable country in the region, is being upended by social protests and the imminent rewriting of its constitution. The new constitutional framework will determine Chile’s political and economic future and whether or not it will continue to be a standard-bearer in Latin America for economic prosperity and political liberalism.

Looking back, there were long-standing signs that something was rotten in Chile, to paraphrase Shakespeare. Since the ousting of former President and General Augusto Pinochet Ugarte in 1989, Chile’s political power has been handed off between moderate center-right and center-left coalitions, and going back to 2011, young Chileans have been demanding changes to the country’s public education system.

Mirroring events worldwide, anti-establishment sentiment has been taking hold, spurred by a sense of rising inequality and corruption in the country. The result has been a blemishing of the steady centrism that guided Chile for nearly four decades. Since 2012, Transparency International has listed Chile as one of the countries with one of the most significant declines in citizens’ perception of clean government. As we have seen elsewhere, this recipe is a combustible mix for political change.

That flammable mix caught fire in 2019 when millions of people took to the streets to demand change. Initially sparked by a 4-cent increase in bus fares, the protests soon took on a life of their own, calling for a change on a broad range of social issues and greater economic fairness.

The breadth and depth of the protests sparked millions of dollars in damage, accusations of police brutality and eventually, an acquiescence by the country’s leaders to accept a referendum to test whether Chileans wanted a new constitution. The question of Chile’s constitution has long been a lightning rod among the country’s political left. When former President Pinochet was ousted in 1989, the constitution his allies wrote remained in place. These new street protests sought to change that.

The traditional right and center political coalitions were relegated to mostly observers, as far-left and, most surprisingly, political independents garnered the majority of the assembly seats. Of the 155 constituent assembly members, the conservative right-leaning coalition parties garnered only 37 seats in the assembly, not even enough to be able to veto proposed initiatives, while hard-left parties, independents and representatives of indigenous communities held 70% of the seats.

Don’t count Chile out just yet: So far this year, despite the political turmoil, the country’s economy is bouncing back.

In a country accustomed to three decades of stability, this new political landscape has shaken Chile to the core. There is little doubt that the future Chilean constitution will be a much more socially conscious one, with many social rights such as education, housing and health care engrained in its text. The much-touted Chilean private pension system, a legacy of the notorious “Chicago Boys” that defined Chile’s economy 40 years ago, is likely to dramatically change to include a more public flavor.

Not surprisingly, Chile’s private sector is nervous about what the future may hold. Chile’s present constitution is friendly to private enterprise, a significant reason for the country’s economic stability and growth over the years. University of California economist Sebastian Edwards, who is Chilean, believes that “the private sector has many reasons to be concerned.” An analysis by the Chilean consulting company, Melero and Associates, found that 96 of the 155 elected members of the assembly support restricting or prohibiting foreign investment.

For a country that has benefitted from an open economy, such a move would be draconian. As a result, perceptions of the country’s political risk have already increased. One concrete example is the decision of the mining company, Lundin, to withhold a planned $500 million investment to expand its copper operations in the country. The mining industry, a leading revenue generator for the country, is likely to be in the crosshairs of any constitutional changes.

But don’t count Chile out. So far this year, despite the political turmoil, the country’s economy is bouncing back. In April, economic growth was at 14.1% year over year, and 2021 growth projections are being increased by at least one international bank. Even when discounting that the numbers are likely reflecting the same COVID-related contraction felt in other countries, Chile remains strong.

It’s also important to remember that the constitution is not a done deal. Any proposed new constitution still needs to be approved by the electorate in a vote to be held next year. The last election to select members for the constituent assembly had a low participation — only 43% voted. That is likely to change in the vote to approve the constitution. This fact alone could constrain the most radical constitutional notions.

And before that, there are presidential elections in November. So far, the race is wide open, with discredited political parties sitting near the bottom of all polls. At the moment, the communist mayor of a Santiago district, Daniel Jadue, leads the polls with 20% of the vote. Five months is a long time in politics, but Jadue’s lead reflects a country that is still seething.

What has happened in the streets of Santiago, Valparaiso and other Chilean metropolitan centers is a clarion call for countries around the world. Even the most successful economic growth, if not accompanied by social progress, is a chimera. Even if the most radical proposals do not emerge from the assembly, Chile’s new constitution will certainly be more socially conscious and statist and require far greater legally mandated government spending. Whatever happens, Chile will emerge from this process a changed nation.

Andrew Yeo Senior Fellow and SK-Korea Foundation Chair in Korea Studies at Brookings Institution’s Center for East Asia Policy Studies
URL: https://www.brinknews.com/chiles-moment-of-reckoning/
Get ahead in a rapidly changing world. Sign up for our daily newsletter. Subscribe
​​