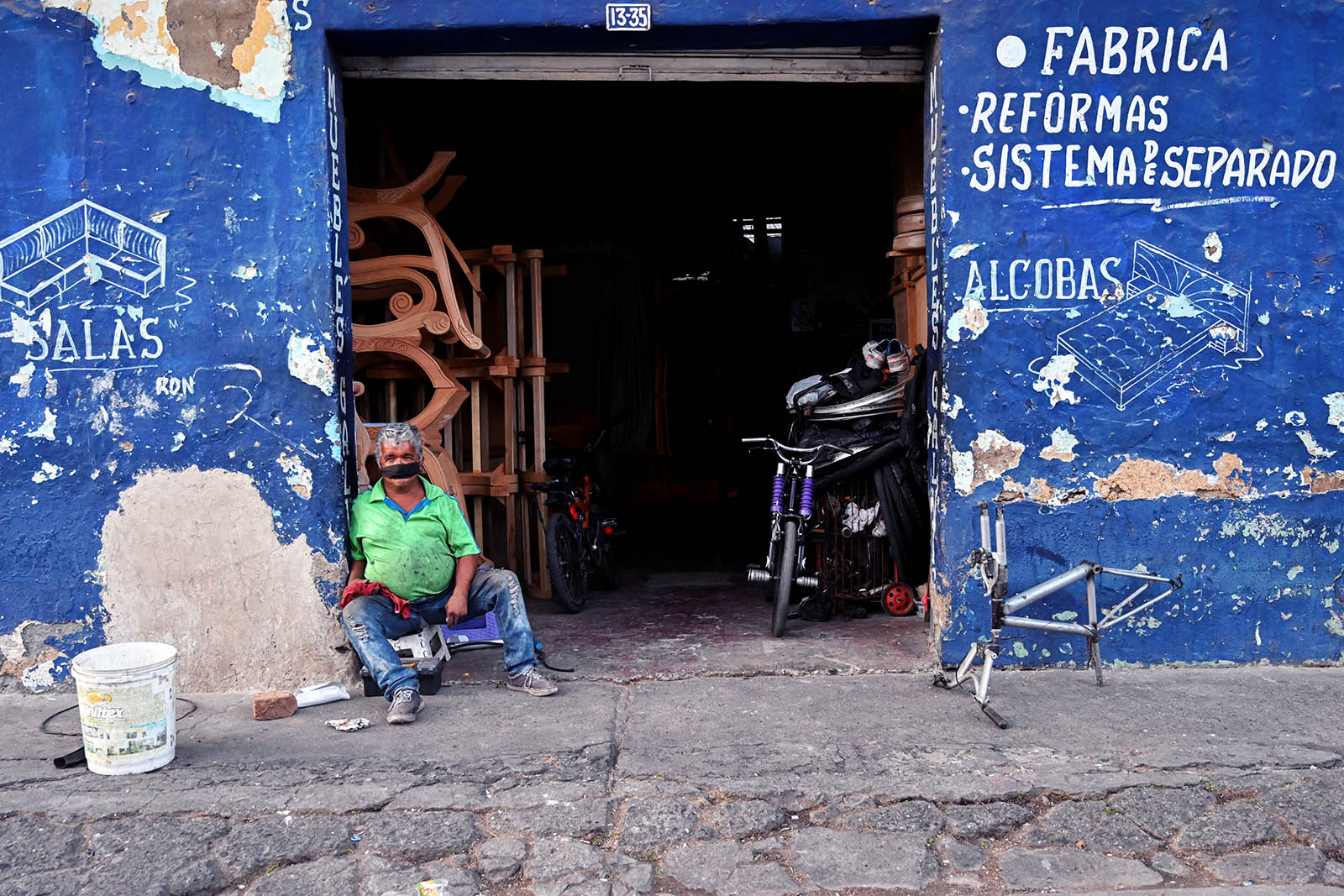 A person wears a face mask in front of a business in Cali, Colombia, on July 31, 2020. Despite years of economic modernization, Colombians are frustrated by ongoing inequality and state ineptitude in implementing the peace process.

It’s hard to remember a time when pessimism has run deeper in Latin America. It has always been a region of great promise, but even greater lost opportunities, and now is one of those down moments. A perfect storm caused by COVID-19, political instability and economic stagnation has hit the region and isn’t going away anytime soon.

No other region in the world has felt the impact of the pandemic, both in human health and economic terms, more than Latin America. Nearly 30% of the world’s COVID deaths have occurred in Latin America, despite having only 8% of the global population. The economic decline has also been more marked. “The 7.4% loss of GDP in 2020 was the largest in a single year since 1821,” according to a report from the Inter-American Development Bank, far higher than the 3% global GDP contraction.

The region has lost over 34 million jobs according to the International Labor Organization, and labor participation rates have experienced a precipitous drop. As expected, poverty has increased dramatically — it is estimated that 22 million more people entered poverty as a result of the crisis.

Forced by economic desperation, many countries increased spending to stimulate their economies. On average, Latin American nations’ stimuli were around 4.5% of GDP; Peru’s at 12% and Brazil’s at 8% were among the highest. Today’s stimulus is tomorrow’s debt, and this is likely to cause headaches in the future as countries seek loans to pay for the stimulus spending.

The one country that took early action to address the debt issue, Colombia, felt the wrath of a still vulnerable population. A tax reform package seeking to raise revenues through increased taxation led recently to historic national protests, forcing the government of President Ivan Duque to withdraw the proposal and leading to the resignation of its finance minister.

Some economic growth is expected in 2021 across the region, but it’s too low to address growing social needs. An IDB report noted that it expects the region to grow at 4.1% in 2021, but decrease to 2.5% soon after, far below developed nations. Caribbean nations are likely to experience even lower growth rates.

Other signals also portend a slower post-pandemic recovery for the region. COVID-19 vaccine delivery remains low in the region, with many countries not expecting significant inoculations until late in the year or 2022. Driven by national vaccine inefficiency, wealthy residents of the region are flocking to the United States to get vaccinated.

Anti-market politicians, espousing command-control economic measures, now threaten the advances in liberalizing markets over the last decade. In Peru, populist leftist firebrand, Pedro Castillo, is the favorite to win the June 6th presidential election. He has promised nationalizations and generally to turn the clock on free-market reforms in the country.

In Mexico, President Andrés Manuel López Obrador continues building a state-centered form of capitalism more akin to the 1950’s than today’s global economy. Bolivia and Argentina, led by governments seeking to turn back the clock on market reforms, continue to struggle to bring the virus under control.

Colombia is, perhaps, of greatest concern. Despite years of economic modernization, Colombians are frustrated by ongoing inequality and state ineptitude in implementing the peace process. This puts Gustavo Petro, another populist leftist ideologue, on a clear footing to be a serious contender in next year’s presidential election.

A robust economic recovery for Latin America will require plenty of international assistance, greater levels of COVID-19 vaccination and robust support for the private sector.

The region’s political instability is occurring not only at a time of economic crisis but at a time when the legitimacy of the state is in grave doubt. Corruption in Latin America continues rampant and results in huge economic costs. More importantly, corruption — driven by a tandem of criminal narco-mafia and weak judicial systems — is seeping trust in government and political leadership.

The demonstrations in Colombia and elsewhere in the region not only protest poverty, inequality and poor services; they are also a consequence of rage against corrupt political leadership.

A robust economic recovery for the region will require plenty of international assistance, greater levels of COVID-19 vaccination and robust support for the private sector.

But if such a recovery is to be long-lasting and not just a blip, economic benefits need to reach the region’s poorer citizens. Unless long-term inequality is addressed, the boom and bust of Latin American economies, albeit with more busts than booms, will persist.

The international community must step in to help. The World Bank has already announced $160 billion in financial support for more than 100 countries over the next year. The IDB is seeking a much needed capital increase in the range of $80 billion to deal with the crisis at hand. The U.S. administration has announced a $4 billion package for Central America, in part to deal with the increased illegal migration to the U.S., caused partly by the increased economic struggles in the region.

The private sector must also take responsibility in two important ways. First, it must step out of its shell and remind citizens and governments that it is a key part of any recovery. Secondly, the private sector must do more to press governments to deal with the region’s long-term educational and economic inequities. It should also promote socially responsible programs to help vulnerable populations.

The increasing social instability serves no one, and especially not the private sector, as discontent builds political pressures for more centralized economies.

A Lack of New Ideas

But is all this incrementalism enough? There are precious few new ideas in the region. China’s money and vaccination diplomacy has allowed Beijing to make diplomatic inroads, but it doesn’t fundamentally change the region. New thinking and new initiatives are urgently needed. These include making massive improvements to education and deep investments in infrastructure.

Here is one new idea: Join the two largest economies in the Americas. A free trade agreement between Brazil and the United States could fundamentally alter the region and force all countries — including Mexico — to join in.

It’s a longshot, given the rifts between the two countries in a number of areas, particularly agricultural policy. But joining the region’s two economic locomotives at the hip could do for the Americas what France and Germany’s economic union did for Europe.

Chris Miller Associate Professor at the Fletcher School at Tufts University
URL: https://www.brinknews.com/latin-america-stares-into-the-precipice/
Get ahead in a rapidly changing world. Sign up for our daily newsletter. Subscribe
​​