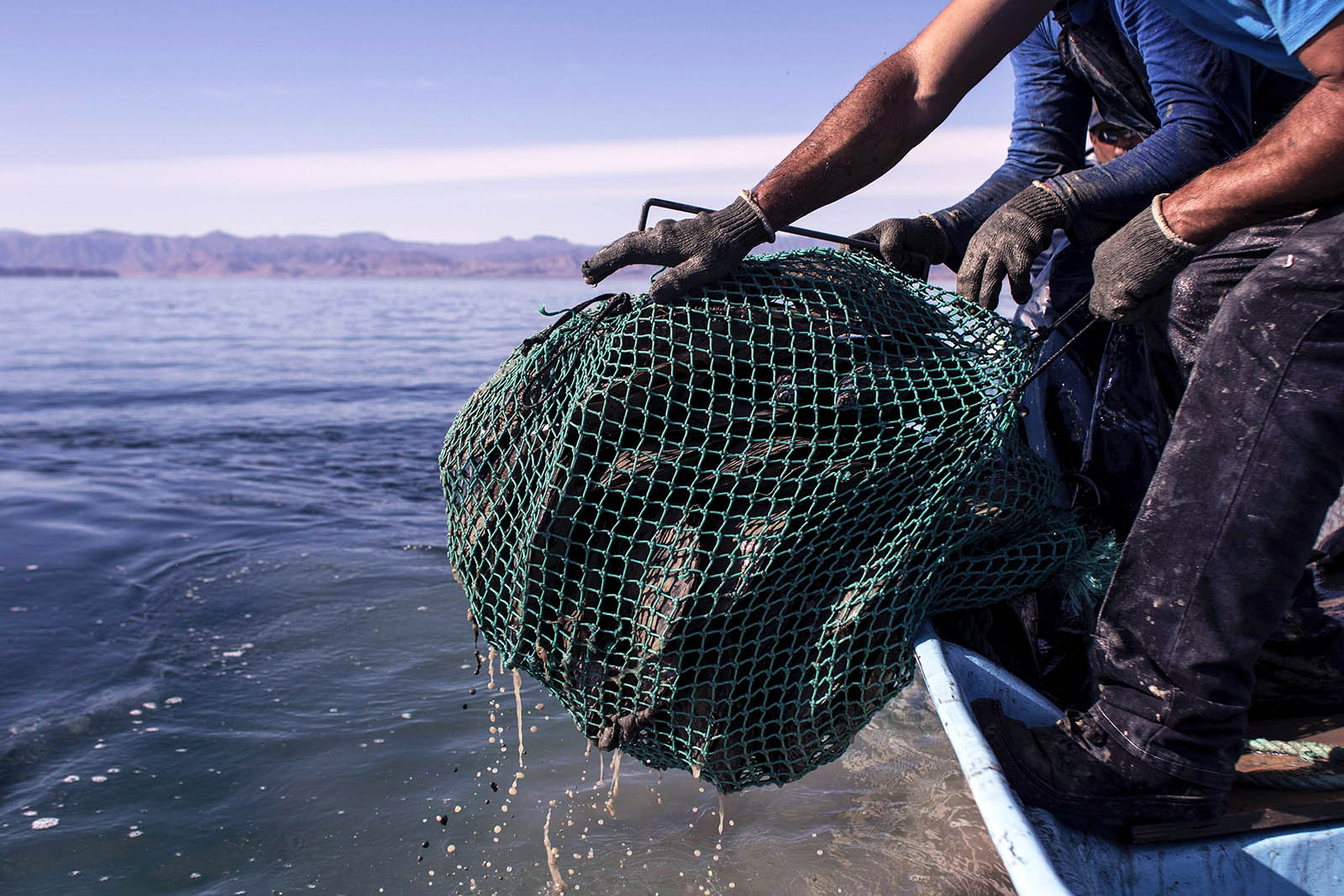 Fishers pull up a bag with scallops near northwestern Mexico. The impact of China’s fishing incursions can be measured in both economic and environmental impacts.

Illegal fishing is becoming a significant irritant in the increasingly complex economic relationship between China and Latin America. The issue boils down to China’s hunger for seafood. China’s need for seafood represents at least one-third of global fish demand, and future projections show dramatic consumption increases. A study by the Stockholm Resilience Center at the University of Stockholm projects that China will need an additional six to 18 million tons of seafood annually to satisfy domestic consumption.

The increased demand for seafood has depleted fish stocks around Chinese coastal waters, forcing Chinese trawlers to exploit other waters. The Overseas Development Institute estimates the Chinese fleet to number nearly 17,000 ships. For comparison’s sake, the U.S. distant fleet is composed of 300 vessels. Only Taiwan and South Korea come close to China’s large fleet with 2,500 such vessels combined.

Not Just a Passing Fleet

Estimates of Chinese illegal fishing in South America are staggering. The head of Calamasur, a local fishing association in Peru, estimated that the Chinese fleet may be illegally fishing 50,000 tons of Humboldt squid in Peruvian waters, one of the main targets of the Chinese fishing expeditions.

Last September, Oceana, an international NGO focused on protecting the world’s oceans, called out China for having 300 vessels illegally fishing off the Galapagos Islands — thousands of miles away from its home coasts. The organization said that the ships — with their GPS turned off to hide — were first detected there in July 2020 and fished there until August. Around that same time, Peru mobilized its navy to watch its coastal waters as over 200 Chinese ships were identified illegally fishing near its coast. “It’s an open secret that every year vessels, mainly from China … are installed just at the edge of 200 miles off Peru to extract this resource,” said Cayetana Aljovín, president of the National Society on Fishing, to Reuters. The Chilean navy has also reported Chinese vessels secretly fishing in its territory.

The latest Chinese incursion into the waters of these South American nations resulted in the four member nations of the Permanent Commission for the South Pacific — Ecuador, Chile, Colombia and Peru — coming together to issue a joint statement promising to work together “to prevent, discourage and jointly confront.” China was not mentioned in the statement, but it was clear to everyone who was the perpetrator of the illegal fishing and the spark for the joint effort.

Ecuador presented various proposals aimed at addressing Chinese fishing practices, including one that prohibits the use of transshipment — a practice which Oceana and other organizations have called out as illegal and damaging. Transshipping is a process by which fishing vessels and refrigerated cargo ships rendezvous at sea to transfer seafood, fuel or supplies. This practice has been flagged as one often intended to mask illegal fishing.

The impact of China’s fishing incursions can be measured in both economic and environmental impacts. According to Chile’s National Fishing and Aquaculture Service (Sernapesca), illegal fishing causes $397 million in losses every year. Chilean government officials have asserted that 70% of that country’s fishing stock has collapsed.

The question is whether the broader economic agenda will diminish the interest of South American nations to hold China accountable for its illegal incursion into the region’s fisheries.

Ecuador has also suffered important environmental impacts. Sharks, a precious commodity in China, have been ravaged by the Chinese fleet‘s activity. For instance, in August, 2017, a Chinese ship was detained with more than 6,000 dead sharks. The ship was a transshipment vessel for the precious cargo.

The US Is Watching

United States officials have taken notice of Chinese power moves in the fishing industry. Axios recently reported that U.S. Intelligence agencies have recommended that “the U.S. should consider leading a multilateral coalition with South American nations to push back against China’s illegal fishing and trade practice.” The report added that South American nations would welcome U.S. intervention into this matter. It cited in the document that Chinese fishing activities would “cause continued economic harm to U.S. domestic fisheries as a result of anti-competitive tactics.”

Last year, the U.S. announced it would base Coast Guard cutters in the Western Pacific to prevent illegal fishing and harassment of vessels by China.

Similarly, last December, the U.S. Coast Guard vessel joined a patrol mission to South America “in a joint search to put an end to illegal fishing.” This is part of a broader effort that began in 2015 in a partnership between the Coast Guard and South American nations.

Much has been written about China’s increased investment and commercial ties with Latin America, especially with Pacific bordering nations. The question is whether this will simply remain an irritant or become a larger issue. There is much at stake.

China has invested $28.24 billion in Peru since 2005. Ecuador, another primary victim of illegal fishing, received $12.94 billion — close to 13% of its GDP. Ecuador’s exports to China are now 15.8%, compared to 3.9% in 2015. Over that time, exports to the U.S. decreased by nearly 16%. Most recently, China’s pandemic diplomacy has made it a leader in providing COVID-19 vaccines to many countries in South America, including Chile which is leading the region in vaccinations.

So, the question is whether the broader economic agenda will diminish the interest of South American nations to hold China accountable for its illegal incursion into the region’s fisheries. Given the economic upheaval in the region caused by COVID-19, it is likely that China’s economic muscle will win out in the long run.

There is no doubt that there is a growing interest in the United States to intervene and protect Pacific waters. But, China’s international footprint and the difficult bilateral agenda between Beijing and Washington are likely to spare China’s aggressive fishing industry a substantial penalty.