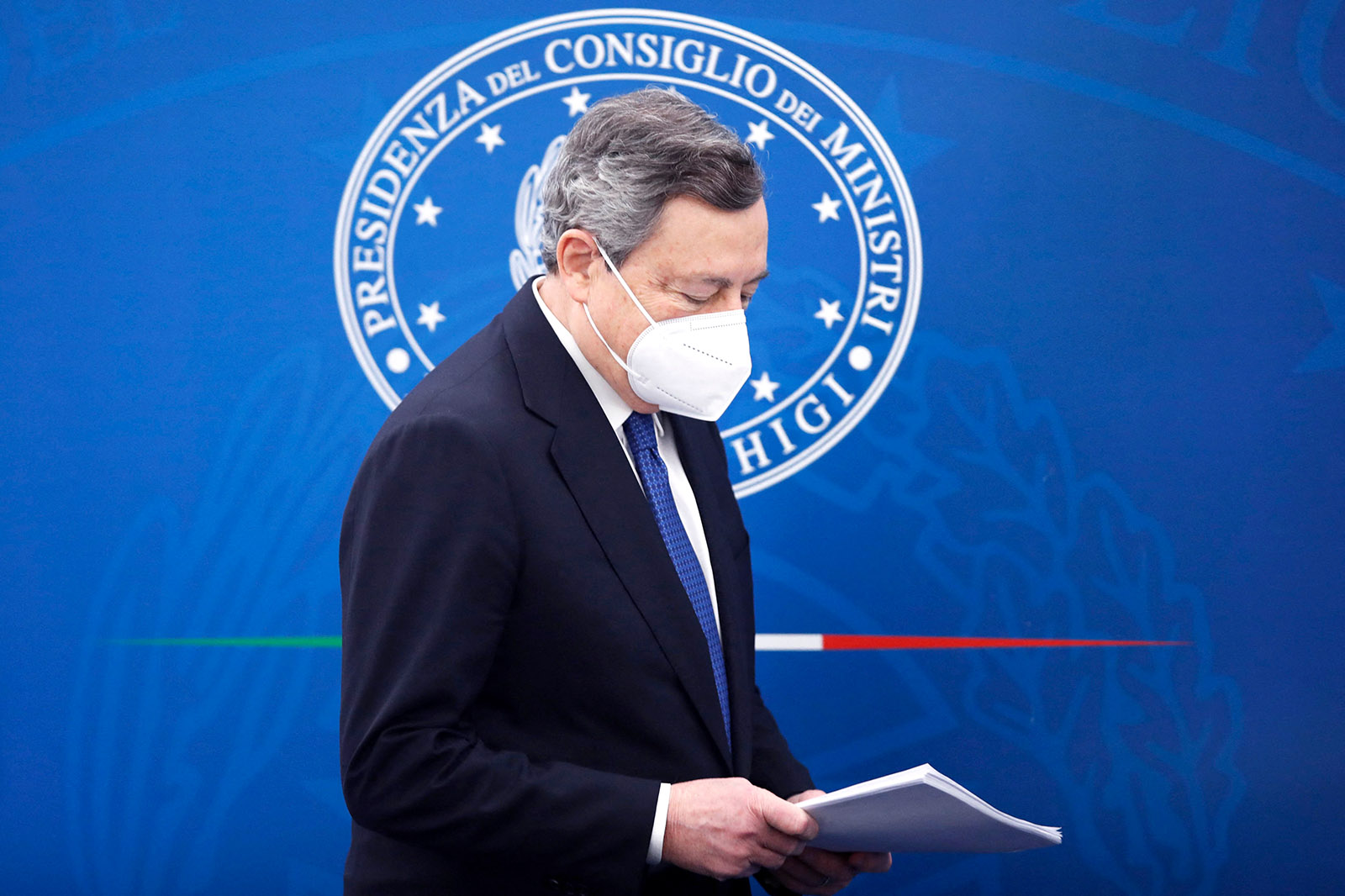 Italy's Prime Minister, Mario Draghi, arrives to hold a press conference on March 26, 2021, in Rome amid the coronavirus pandemic. Prime Minister Draghi’s plan is not only to save Italy, but also to build on the work that he began while he was at the helm of the ECB.

At the recent Leaders Summit on Climate, Italian Prime Minister Mario Draghi described his own country as “beautiful, but fragile.” His pledge to dedicate a big chunk of common European financial resources, known as “Next Generation EU,” to fund Italy’s transition to a more sustainable economy is a big bet. Prime Minister Draghi is trying to replicate in Italy what he did for the EU monetary union during his tenure as president of the European Central Bank: to make it more resilient.

The goal is ambitious. Officially, recovery funds agreed in response to the COVID-19 pandemic are one off measures. In reality, they could become permanent features of a vastly expanded toolbox. If Italy can be put back on track, Europe will have to agree to integrate further.

A Hamiltonian Moment for the EU

Whether the common EU fiscal response to the pandemic is the Hamiltonian moment that many analysts spoke of when EU leaders agreed to mutualize 750 billion euros, now largely depends on how Italy does in the next few years.

The bulk of common European funds — about 200 billion euros — will go to Italy.

The mix of grants and loans will be largely dedicated to accelerating the green transition and digitalizing the Italian economy and public administration. Prime Minister Draghi’s plans also foresee an ambitious overhaul of the justice system, whose slowness is considered an impediment to foreign direct investments.

The Prime Minister is making sure that it is him and his closest allies in government that will handle the interactions with the EU commission in Brussels. In the EU capital, Prime Minister Draghi has a credibility that traditional Italian politicians simply lack.

Europe is watching the former central banker with hope and anxiety. If Italy fails to reform, Europe will likely be stuck in a bad equilibrium for many years: too big to disintegrate, but too timid and cumbersome to be able to respond with the necessary pragmatic agility and ambition to the economic and geopolitical challenges it faces.

So Prime Minister Draghi’s plan is not only to save Italy, but also to build on the work that he began while he was at the helm of the ECB: to push Europe and in particular the Eurozone to integrate further — and to make it more resilient and less fragile.

Italy is known for wasteful spending, dysfunctional politics and byzantine bureaucracy. Rather than being at the forefront of reforms, the country is all too often associated with being Europe’s dead weight — too big to fail, yet impossible to reform. For decades, EU partners have pressed governments in Rome to introduce structural reforms.

However, nobody wanted to be on the hook for a stagnating economy — before the pandemic, the economy had a debt to GDP ratio of about 130%. But the timid changes performed by Rome were used by EU partners, such as Germany, to justify their reluctance to agree to additional burden-sharing measures at a European level.

Paradoxically, with Prime Minister Draghi’s spending plans public debt will initially jump to 160%, even slightly more than under the spending plans of the previous government.

Realistically, there are only three ways to reduce that ratio over time: more growth, more inflation or austerity. Prime Minister Draghi is a Keynesian economist with little patience for an ideological attachment to austerity. Since cutting back public expenditures can push economies into a deflationary spiral and therefore become self-defeating, Prime Minister Draghi is betting on making and spending good debt — money dedicated to investments rather than wasteful expenditures.

The big question now is can the country deliver? If it does not, European governments are likely to revert back to mutual finger-pointing, a behavior that was kept in check even during the worst months of the COVID-19 pandemic.

A Lot Depends on Germany

Much will also depend on which way Germany will go once Chancellor Angela Merkel leaves office in early autumn. German conservatives are split on the path forward for Europe. Many are weary of big public spending plans — European and national alike — that have emerged during the pandemic.

The temptation to revert back to belt-tightening measures is very present. If that became German government policy, it could quickly put a new conservative German government on a collision course with Prime Minister Draghi and his closest European allies, such as France. It would be a repeat of the North-South split experienced during the so-called euro crisis.

However, this is not a foregone conclusion as even in Germany the political discourse is changing. Polls show that a majority of voters currently back parties that are more open minded towards debt spending and a more active role of governments in market economies. Prime Minister Draghi’s and President Macron’s vocal push to protect European assets from foreign takeovers (primarily Chinese) enjoys wide political support in Germany, too. Europe as a whole is becoming more assertive in its industrial policies thanks to an alignment of German, French and Italian positions.

Some concrete progress could be expected soon on some legacy projects that Draghi contributed to launch as a central banker, such as the banking union, and there too, Germany’s position has softened. The debate on reforming common European fiscal rules, too, will likely gain some traction. Fiscal rules are currently suspended because of COVID-19.

But for now, Prime Minister Draghi’s main objective is to make sure that Italy starts spending European public funds well. That would give him the additional political capital needed to start phase two and push for a more ambitious European agenda. It is a multi-year project.

However, it is not clear whether Italian political parties currently supporting the government have the will to commit to such a medium-longer term scenario. The clear and present temptation for professional politicians will always be to use Prime Minister Draghi for as long as needed, and then find a convenient excuse to withdraw parliamentary support and replace him with one of their own.

Mark Campanale Founder and Executive Chair of The Carbon Tracker Initiative
URL: https://www.brinknews.com/can-mario-draghi-rescue-italy/
Get ahead in a rapidly changing world. Sign up for our daily newsletter. Subscribe
​​