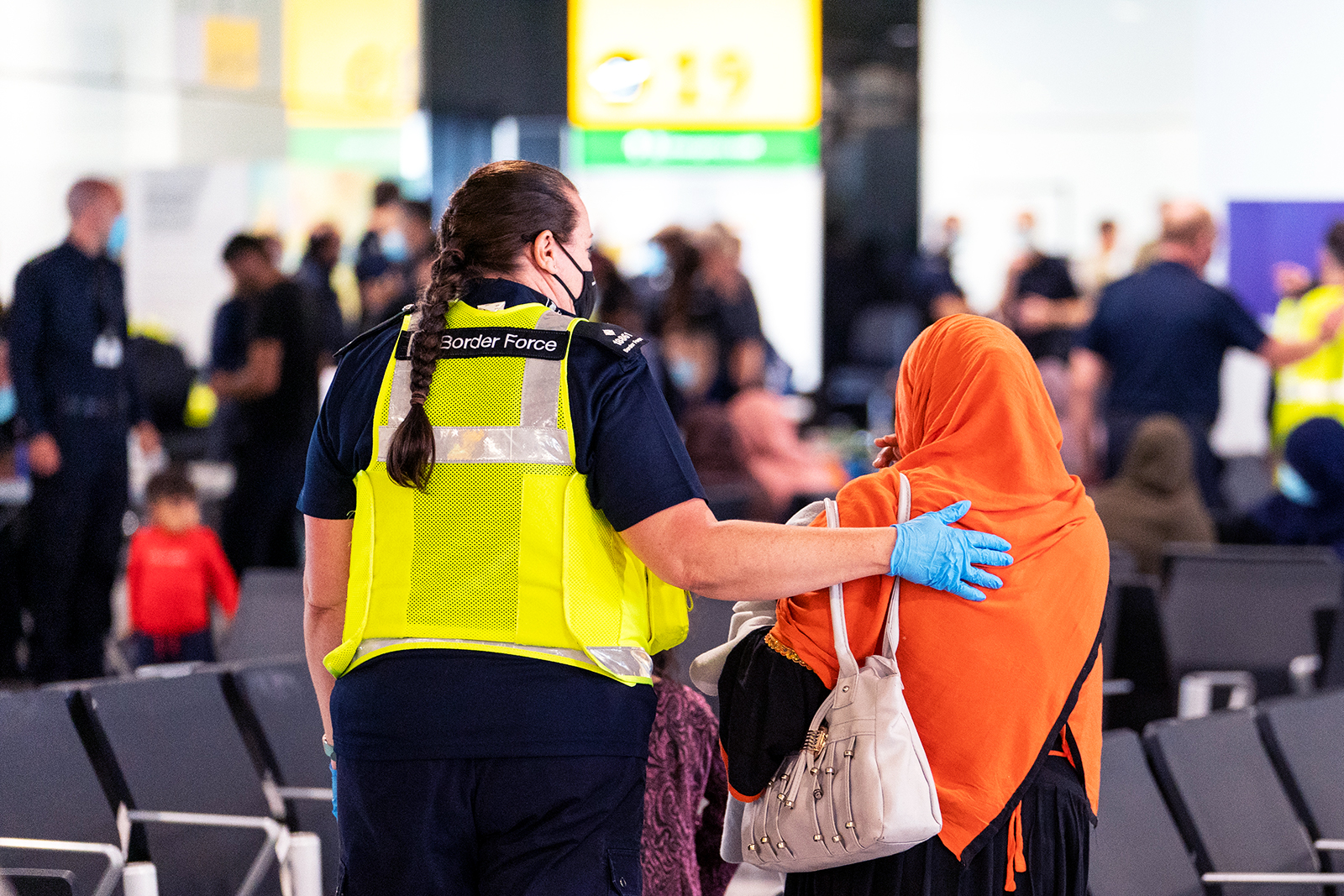 A member of Border Force staff assists a female evacuee as refugees arrive in England from Afghanistan on August 26, 2021. It is unclear whether the current crisis will necessarily result in a dramatic increase in refugee flows from Afghanistan toward Europe.

The swift takeover of Afghanistan by the Taliban and an upcoming final August 31st deadline for all NATO troops to leave the has triggered panic among European politicians about the possibility of a new refugee emergency — especially in countries that are facing elections in the coming months, such as Germany and France.

Candidates for high offices have been quick to reassure voters that 2021 won’t be a repeat of 2015, when more than a million Syrian and Afghan refugees streamed into Europe and caused one of the most serious challenges that the EU has faced in recent times.

“The mistakes made in the Syrian civil war must not be made again,” promised Armin Laschet, the leader of Chancellor Angela Merkel’s Christian Democratic Union. He was echoed by Merkel herself and the chancellor candidate for the Social Democratic Party, Olaf Scholz.

Both have stressed that it is Afghanistan’s neighboring countries that now need support to deal with the challenge.

French President Emmanuel Macron was even blunter, stating in a televised address that France should have a robust plan to “anticipate and protect itself from a wave of migrants (….)”, adding that “ dealing with those fleeing the Taliban would need a fair and organized international effort.”

Greece has gone further by installing a 25 mile long fence along its borders. Most of the criticism directed at the U.S. president by European partners seems to be caused by the fear that it is they who will have to deal with the destabilizing consequences of a humanitarian crisis provoked by the sudden collapse of the pro-western government in Kabul.

Events in Afghanistan have exposed how six years after the events of 2015 there is still a lack of a clear EU framework for dealing with large inflows of migrants: How to process and, most importantly, distribute refugees still very much depends on the willingness of individual EU member countries to accept them on their territory.

A Need for a Framework

The so-called Dublin EU framework that put most of the onus on first entry countries has not been replaced by anything new and durable. The EU beefed up its border police force Frontex and financially supported countries, such as Turkey and Libya, in return for their efforts to keep refugees away from Europe. But this approach was always supposed to buy time — not become the only pillar of a shaky immigration framework.

The conflict in Afghanistan has once again revealed the brittleness of Europe’s patchwork of migration policies.

The absence of any new ways of dealing with non-EU immigrants has forced the EU and its leaders to resort to the same imperfect tools employed in the wake of the last crisis. Just like in 2015, Merkel spoke to Turkish President Recep Tayyip Erdogan — although both Ankara and Berlin deny that the possibility of a new deal was discussed or even mentioned. Italian Prime Minister Mario Draghi is pushing to get the G20 involved by including China, India and Russia into any efforts to deal with the aftermath of the Taliban takeover.

The EU is discussing funding schemes for Afghanistan’s neighboring countries. While critics have pointed out that the EU is unnecessarily putting itself in the position of being blackmailed by potential recipients of financial aid, the aim of the exercise is clear: Once evacuation efforts are concluded, don’t expect EU countries to welcome many more refugees.

Numbers of those currently entitled to resettle in western countries vary — no overall official figures are available, but based on promises made by individual governments it is safe to assume around 100,000. However, these numbers pale when compared to those of the United Nations’ refugees organization. According to the UNHCR, there are currently 3.5 million internally displaced people in Afghanistan.

Worldwide, there are currently around 2.5 million registered Afghan refugees. Notably, most of them — 2.2 million — are in neighboring Pakistan, not in Europe. It is in fact unclear whether the current crisis will necessarily result in a dramatic increase in refugee flows from Afghanistan toward Europe. The countries that will likely continue to bear the brunt of the humanitarian cost of the war are Pakistan and Iran. The potential corridors for refugee flows from Afghanistan toward Europe are currently largely choked off.

Also, the Taliban themselves seem to be determined to stop migrant outflows, at least for the time being. They seem to have concluded they can ill afford to bleed expertise when what they need are Afghans with some experience of running a bureaucracy.  Much of course depends on how much and quickly the Taliban will alienate Afghan civilians — and whether a bloody civil war can be avoided.

Engaging with the Taliban?

Once the current visible turmoil subsides — and western witnesses have left the scene — EU governments will likely try to engage with the Taliban directly to address a possible migration emergency. Merkel obliquely hinted at this before the Bundestag on August 25th when she declared that unfortunately one had to accept that the Taliban are now in charge. But much of this tentatively emerging approach of careful engagement is largely based on hope rather than sound policy.

The situation in Afghanistan has once again revealed the brittleness of Europe’s patchwork of migration policies. The country could represent a new wake up call or recede in politicians’ minds if the worst can be avoided. Unfortunately, geopolitical instability is here to stay, and will be further fueled by the impact of climate change on vulnerable societies.

As a result, migration flows will likely continue to increase, further exposing the lack of a coherent European strategy to deal with the crisis at hand.

Til Schuermann Partner and Co-Head of Oliver Wyman’s Risk & Public Policy Practice
URL: https://www.brinknews.com/is-europe-facing-a-new-migrant-crisis/
Get ahead in a rapidly changing world. Sign up for our daily newsletter. Subscribe
​​